The recent slump in AMC Entertainment (NYSE:AMC) share value looks like potential bad news for the beleaguered theater chain. The latest superhero movie, Spider-Man: No Way Home, has sizzling pre-sales ahead of its Dec. 17 release. AMC also announced what looks like a potential crowd-pleaser among its Reddit retail investor "ape" fans, the issue of NFTs (non-fungible tokens) to advance tickets bought through its loyalty program.

But the company's share price is falling fast in spite of these theoretically positive catalysts. If the sell-off signals ape disenchantment, it represents a seriously negative shift for AMC -- but there's a potentially more upbeat explanation, one possibly containing a hint of bullishness.

AMC's stock market plunge comes at a moment when apparently good news is in the air on several fronts. Brick-and-mortar movie theater ticket sales have been electrified by the latest "blockbuster" superhero fantasy, Spider-Man: No Way Home. Pre-sale ticket purchases were so numerous they crashed the Fandango website, reaching levels last seen in 2019 for Avengers: Endgame, according to MSN News. Avengers: Endgame saw a similar pre-sale frenzy and eventually scored $357.1 million at its opening, setting an all-time record to date. A similar record isn't out of the question with Spider-Man. 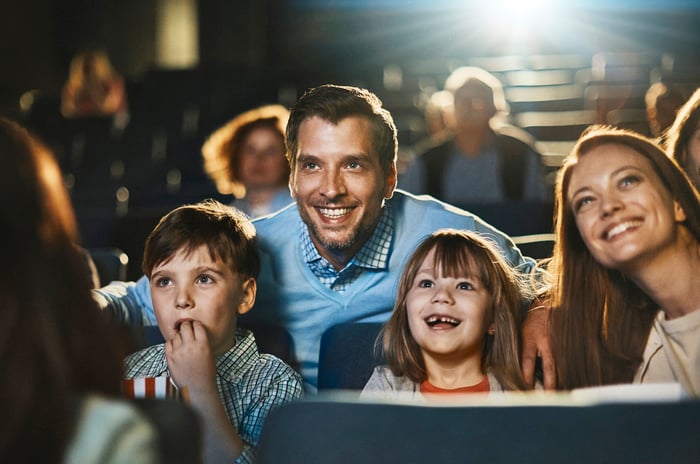 AMC got a portion of the Spider-Man pre-sale pie, though other movie chains obviously also benefited from the public's ticket-buying fever. What is unique to AMC is its offering of NFTs (non-fungible tokens) to advance ticket buyers who are members of either its AMC Stubs Premiere or its AMC InvestorConnect loyalty programs. The NFT promotion features 100 different NFT designs created by Cub Studios, with a limited supply of 86,000 total individual NFTs to be redeemed on a first-come, first-served basis.

The promotion, which is likely also an icebreaker for future NFT projects, appears designed to get moviegoers into physical seats and not simply to sell more tickets. Ticket buyers who want to redeem the NFTs "must have their AMC Stubs account number associated with the transaction, and the movie ticket must be scanned at the theatre when the guest arrives for the movie," according to the press release, meaning it's impossible to just buy a ticket to get the NFT without going to the movie screening. While AMC is trying to sell more tickets, it also appears to be trying to normalize theater viewing again and incentivize customers to return to pre-pandemic cinema-going habits.

Motley Fool contributor Rick Munarriz points out AMC's stock market drop accelerated following the NFT announcement,  possibly signaling retail investor disillusionment. The article raises some excellent points about the potential weaknesses of AMC's strategy. These include excessive hype, the unlikelihood of cryptocurrency Shiba Inu holders to spend their tokens on movie tickets rather than "hodling" them in hopes of a "moon-shot" (that is, one of the occasional enormous, and enormously profitable, price jumps the cryptocurrency market is famed for), and other strategic flaws. However, the drop in price could arguably be coming from another source altogether: alarm over the latest COVID-19 variant.

The omicron elephant in the room

While AMC Entertainment's stock price fell after its NFT announcement, other theater chains also dropped sharply in the last days of November. Despite Ghostbusters: Afterlife beating opening weekend forecasts of $27 million to $33 million with its actual $44 million box office haul, Cinemark Holdings fell over 6% on Tuesday, Nov. 30; IMAX Corporation dropped 5.5% the same day; and National CineMedia saw its shares lose more than 12% of their value in a few hours' trading.

The broad-based fall of movie theater stocks simultaneous with AMC's share price slump suggests an external factor is at work, not retail investor disillusionment with AMC itself. This factor isn't hard to find with the stock market itself dropping sharply on news of the omicron variant of COVID-19. The markets have been on a roller coaster since the latest variant was reported, initially dropping, then seeing a Nov. 29 rebound, followed by another slide on Nov. 30 as traders continued to worry over the situation.

The markets' panic response to Omicron points to AMC's dropping share price being part of general investor fears about the fate of physical movie theaters if the government rolls out another round of economically destructive lockdowns, and it likely has little or nothing to do with the disillusionment of its "ape army" with its turnaround plans or specific strategies like NFTs or accepting payment in Shiba Inu. In fact, if institutional investors are selling off some of their AMC holdings and temporarily driving the price down, Reddit retail investors are (anecdotally) buying up shares while the "fire sale" is on.

AMC may not be finished yet

Several indicators also hint the stock market omicron alarm might be overblown. Reuters reports South African doctors are describing the new variant as "very mild" with home treatment sufficient for the vast majority of cases. This follows general virus evolutionary patterns in which viruses generally, though not always, tend to eventually mutate into less virulent (roughly, less dangerous) and more "benign" but more easily transmitted forms after an initial increase in virulence during an epidemic or pandemic.

The massive, eager Fandango purchases of Spider-Man tickets also suggests moviegoers aren't being scared off from physical theaters by the latest round of media COVID hysterics. Also supporting the likelihood of robust attendance, scalped Spider-Man tickets are being sold on eBay with opening bids of $2,500, $10,000, and other absurdly inflated figures, according to CNet. TheStreet reports AMC's own website crashed temporarily after it announced the NFT promotion. This potentially points to a positive reception to the NFT plan -- far from disillusioned, the retail investors may be showing eagerness to obtain an NFT memento related to their favorite meme stock.

This volatile movie theater stock still has many ups and downs ahead of it, and its long-term fate is unknown given its relatively weak performance and massive debt load, but it's still fighting for survival and likely hasn't yet lost the support of many of its retail investor "ape" fanbase, making it a potentially short-term bullish pick.