Wrapped Bitcoin (CRYPTO:WBTC) aims to mirror the value of a Bitcoin (CRYPTO:BTC) token, paired with the higher transaction speed and richer functionality of the Ethereum (CRYPTO:ETH) network. After a relatively volatile winter of 2020/2021, the digital currency has done a sterling job of staying close to Bitcoin's prices since late April. 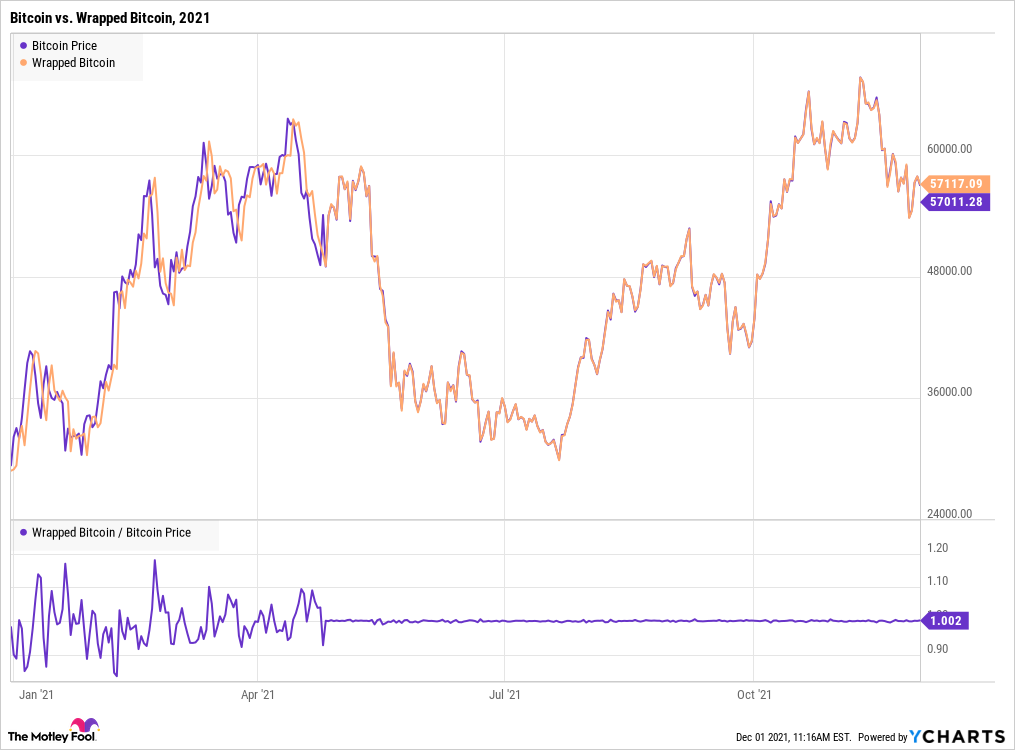 This tight correlation makes a ton of sense since Wrapped Bitcoin can be exchanged for Bitcoin tokens at a 1:1 ratio, and vice versa. That's built into the coding of this digital currency by design. They really should command exactly the same price per token.

However, I just came across this next chart and had to wonder if it's time to make a large investment in Wrapped Bitcoin. Here, we've zoomed in at the tail end of the very straight purple line above (with the orange line still representing Wrapped Bitcoin), but the unshakeable closeness to 1.0 drops off near the end. In other words, the price of a Wrapped Bitcoin is now generally a few percent lower than the price of Bitcoin. That's what investors might call a discount, causing them to jump at the chance of buying tokens right out of the bargain bin.

The preceding chart seems to imply that Wrapped Bitcoin is selling at a considerable discount right now. So if you can get an improved version of the Bitcoin token at a significantly lower price, why shouldn't you jump on the opportunity?

Well, I can think of a few reasons to hold your horses:

At 12:31 p.m. ET on Wednesday,  various data sources did indeed report different ratios between Wrapped Bitcoin and Bitcoin prices. Coinmarketcap showed a 1.8% discount. At Cryptocompare.com, I saw a 0.1% price difference in the opposite direction. Coindesk agreed, giving Wrapped Bitcoin a 0.1% higher price. For the most realistic comparison of all, the Coinbase (NASDAQ:COIN) trading platform showed an even smaller variance of 0.04%. Binance also stands close to breakeven with a 0.09% price difference.

Your mileage may vary. Maybe your favorite cryptocurrency exchange is giving you a bigger discount. 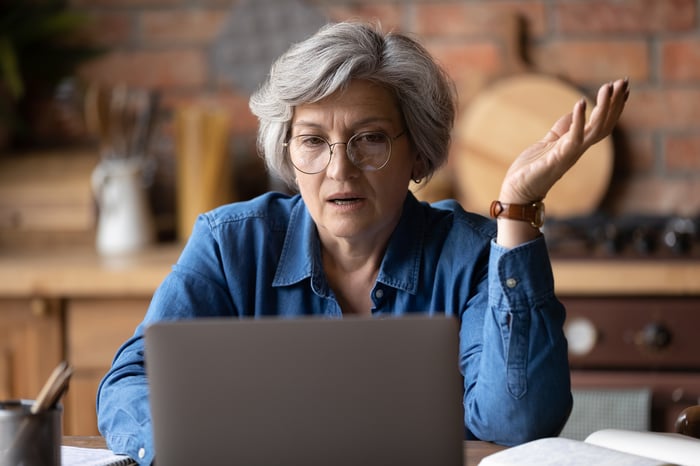 Buy Wrapped Bitcoin if you want, but you're not getting a big discount

I think Coinmarketcap just needs to give its recent data for these two tokens a slightly better scrubbing. There's no real investor advantage to be had here, even if this particular chart is showing a real trend.

Even if you get an absolutely massive 3% rebate for Wrapped Bitcoin at some offbeat cryptocurrency exchange, both Wrapped Bitcoin and Bitcoin itself are likely to move more than that in any given 24-hour period. Let's say you buy some Wrapped Bitcoin at a 3% discount and then go through the so-called atomic swap process that exchanges your tokens for plain old bitcoins. The exchange rate may be in your favor, but there are still transaction fees, and the process takes some time. Your chances of pocketing a significant profit this way are low.

I'm not saying that you shouldn't consider Wrapped Bitcoin. After all, it is an upgrade to the traditional Bitcoin system, adding advanced features such as smart contracts and sharding. If you want that extra functionality and are willing to accept the somewhat larger market risks I mentioned earlier, then it's a reasonable alternative to Bitcoin itself. Just don't expect to get a game-changing pricing advantage based on charts like the Coinmarketcap squiggle above.