Earning income from assets has become an increasing challenge for retirees. Ultra-low interest rates make many options that they might have turned to in the past unworkable today.

However, dividend growth stocks could provide the answer. While dividend payments are usually optional, confidence in a stock may rely on a rising dividend, dramatically reducing the likelihood of a payout cut.

Moreover, not only do some dividends match Fidelity's 4% to 5% recommended withdrawal rate, but they also offer the payout that growth investors need without reducing principal. Magellan Midstream Partners (NYSE:MMP), Realty Income (NYSE:O), and Verizon Communications (NYSE:VZ) are three such stocks that could fund a sustainable retirement. 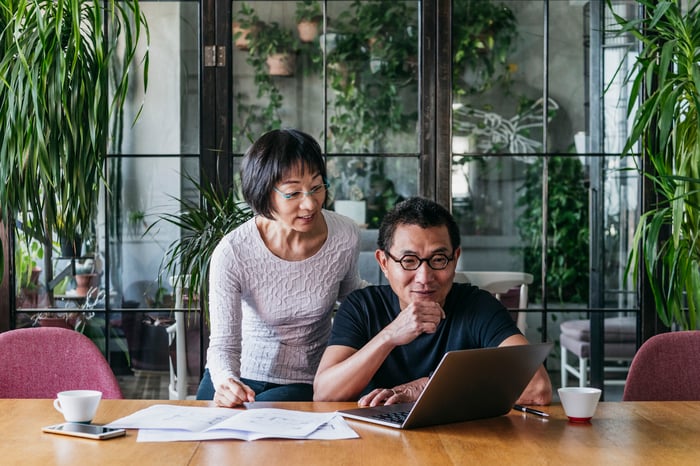 With the intense focus on alternative energy, one might overlook a fossil fuel company like Magellan Midstream. Magellan transports, stores, and distributes crude oil and refined petroleum products. The company owns about 12,000 miles of pipeline used for these activities.

Petroleum has become an increasingly unpopular energy source, and management stated that the business and the stock suffered temporarily as the pandemic led to a significant decrease in the volumes of crude oil and refined product transported in its pipelines. Magellan Midstream has not fully recovered, and it has lost 25% of its value since the beginning of 2020.

However, the U.S. still derives 35% of the energy it consumes from petroleum, according to the U.S. Energy Information Administration. This makes it unlikely that crude oil will go away as an energy source anytime soon.

Moreover, its $4.15 per share annual dividend brings a cash return of around 8.8%. That might sound like a payout vulnerable to a cut. Nonetheless, the company increased its payout by $0.04 per share in the third quarter.

Indeed, a 1% increase over two years may not impress. Still, its annual payout has continued to rise every year since it began trading in 2001. Additionally, just over $1 billion in free cash flow during the first nine months of 2021 covered the $685 million cost of its distributions, keeping its payout sustainable.

Magellan Midstream stock might continue to underperform. But petroleum as an energy source will likely linger for decades, and at current payout levels, Magellan should continue to pay retirees well.

Realty Income is a real estate investment trust (REIT) specializing in freestanding, single-tenant commercial properties. Such an investment might seem counterintuitive given the shift from in-store retailing to e-commerce.

Nonetheless, the company continues its recovery from the pandemic that temporarily affected a large percentage of its tenants. Now, it is on track to invest over $5 billion in new property acquisitions in 2021 across its three markets, the U.S., the U.K., and Spain. Although it reports a 99% occupancy rate, its FFO per share for the first nine months of 2021 came in at $2.41, down slightly from the $2.43 per share reported in the first three quarters of 2019.

However, retirees who buy this stock will earn a payout of just over $2.95 per share annually, paid out monthly. This provides a cash yield of around 4.2% as of the time of this writing. Also, it has increased every year since 1996, making the company a Dividend Aristocrat.

Moreover, it earned $1 billion in adjusted funds from operations during the first nine months of 2021. It paid $798 million in distributions to shareholders during this period, making its dividend affordable for the company, which must distribute at least 90% of its net income to maintain REIT status.

Realty Income stock remains in recovery mode, selling for about 5% less than its January 2020 price. Still, at a price-to-funds from operations ratio of approximately 20, it may seem more reasonably priced. Also, with its high level of rising monthly income, Realty Income should face little trouble in providing adequate and rising levels of payouts to retirees.

Verizon stands in a strong position in the U.S. 5G market. Since AT&T and T-Mobile are its only direct 5G competitors, it benefits from an oligopoly in this crucial service. Also, with a decades-long track record of winning quality awards from J.D. Power, it appears to have an advantage over its peers.

And 5G offers Verizon a way to profit from a new line of business, network-as-a-service (NaaS). This subscription data service allows it to connect devices using artificial intelligence and the Internet of Things in ways not possible in the 4G world. The company has also led the way in promoting it, with Honda's autonomous vehicles and Arizona State University's immersive learning among the technologies powered by NaaS.

Retirees will like that Verizon has hiked its payout every year since 2007. At $2.56 per share annually, new investors earn a return of about 4.9%, making it arguably one of the best dividend stocks for retirement. Also, the company generated over $17 billion in free cash flow in the first nine months of 2021. This made it possible to cover the dividend's $8 billion cost over that period. The payout also does not affect nearly $14 billion in capital expenditures crucial for network maintenance and upgrades.

Investors could find this year's 2% payout hike underwhelming and might balk at buying a stock that has fallen 14% over the last year. However, the company's P/E ratio of less than 10 makes this stock cheap. As more investors come to appreciate the NaaS business, it could take Verizon stock and its dividend payouts much higher over time.