Shares of modern day five-and-dime super-chain Dollar General (NYSE:DG) slipped lower on Thursday, down 3.3% as of 12:45 p.m. ET despite beating projections on third-quarter earnings this morning.

Analysts had forecast Dollar General would earn $2.01 per share on sales of just under $8.5 billion in fiscal Q3. In fact, the company hit $8.5 billion on the nose, and earned $2.08 per share. 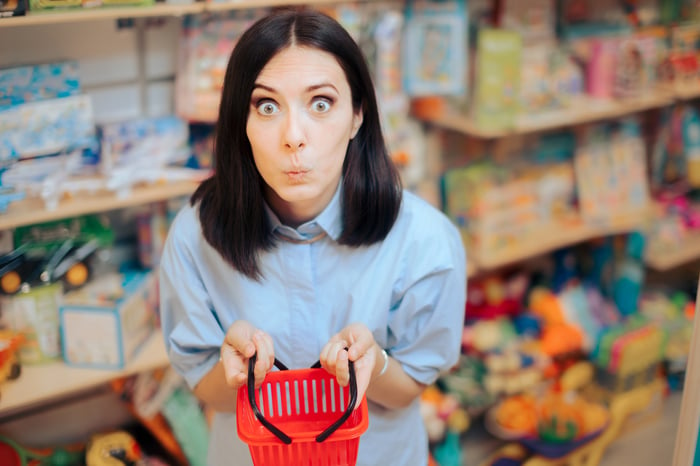 Yet even so, Dollar General's news wasn't great. Although the company eked out a small "beat" on the sales front, net sales for the quarter still only grew about 4% year over year, and same-store sales declined 0.6%.

Result: Despite beating estimates, on the bottom line, Dollar General's profits per share declined by 10%.

So you see why investors were a bit disappointed in the results. Now, the news on guidance was a bit better, but apparently still not quite good enough to move the stock higher today.

On the one hand, Dollar General raised the floor on its guidance range for earnings this fiscal year, and now expects to earn between $9.90 and $10.20 per share. On the other hand, the company still has to max out that range if it's to meet analyst forecasts for $10.20 per share, period.

Similarly, management reassured investors that it expects to see sales grow between 1% and 1.5% for the full year. But again, with analysts forecasting 1.5% sales growth already, only reaching the very tippity-top of its range will be good enough for Wall Street.

Long story short, Dollar General exceeded expectations in Q3. But with no assurance that it will repeat the feat in Q4, investors seem leery of buying more Dollar General stock today.