Electric vehicle (EV) stock Canoo (NASDAQ:GOEV) sank today, plunging 11.4% as of 11:50 a.m. ET. And it wasn't just the broader market sell-off that sent shares of the EV start-up tumbling: Canoo is about to end its only contract manufacturing partnership.

In its latest regulatory filing, Canoo revealed it doesn't expect to sign a definite contract-manufacturing agreement with Netherlands-based VDL Nedcar anymore. The two companies announced a deal in June, under which VDL Nedcar was expected to build 1,000 units of Canoo's first all-electric passenger vehicle, dubbed the Lifestyle Vehicle, in 2022, with a target 15,000 vehicles by 2023. 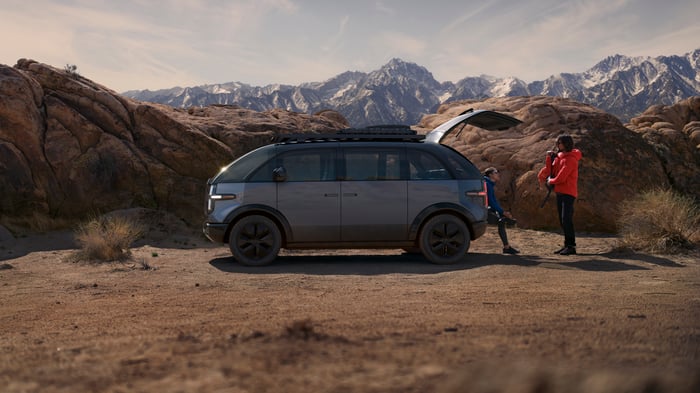 That may sound like a huge blow, but you might get a better picture of things when you go back to some of the things Canoo has said over the past few months. To start, when Canoo first announced VDL Nedcar as its chosen partner, it stated the partnership would help Canoo deliver vehicles to the market while it builds its own factory in Oklahoma. In other words, Canoo never really wanted to depend on contract manufacturing entirely.

In fact, Canoo's CEO, Tony Aquila, explicitly stated during the company's most recent earnings call that they're "bigger fans" of owning factories than outsourcing production, given the inherent risks in contract manufacturing. There was no hint of a possible termination of the contract, but Aquila mentioned the partnership with VDL Nedcar was primarily aimed at expansion into Europe, and that Canoo was in discussions with VDL to see where their relationship is headed.

Evidently, one such inherent risk Aquila must be hinting at was the cybersecurity attack on VDL Nedcar's servers in October. Canoo feared the attack may have put its proprietary information and intellectual property that it shared with VDL Nedcar at risk. And as part of that risk possibility, Canoo stated in its following quarterly filing that if such a cyberattack causes any disruption or delay in the manufacturing of EVs per Canoo's timeline, it might accelerate plans to develop its own factory.

It now appears that's exactly what Canoo is aiming for.

To be sure, Canoo is yet to announce the official end of its deal with VDL and has extended its term binding agreement with VDL to Dec. 15, perhaps to negotiate. But with the company also stating that it doesn't expect a contract manufacturing agreement "due to developments" at VDL, this relationship appears all but dead now.

Here's what Canoo investors need to watch for now: Can the company still roll out its first EVs as planned? Barely days ago, Canoo said it expects to begin production of the Lifestyle Vehicle earlier than expected. Where things stand now, Canoo could gain a lot of respect in the eyes of EV enthusiasts if it can meet timelines without a contract manufacturer.