Investors in Clover Health (NASDAQ:CLOV) had a rough November. Shares of the stock were down 33.9% in the period, according to data from S&P Global Market Intelligence. The healthcare company that is trying to revolutionize Medicare insurance with its Clover Assistant platform posted earnings for the third quarter and closed on a common stock offering in the month.

On Nov. 8, Clover Health released its earnings results for the third quarter, which ended in September. The company's top-line numbers looked good, with revenue growing 153% year over year to $472.2 million. However, deeper into the report things don't look too hot for Clover Health. The company's medical care ratio (MCR) for its Medicare patients, which measures costs as a percentage of premiums earned, stood at 102.5% in Q3, up from 86.7% last year. Any number over 100% means Clover's costs were greater than the premiums it earned, which is not a good thing. 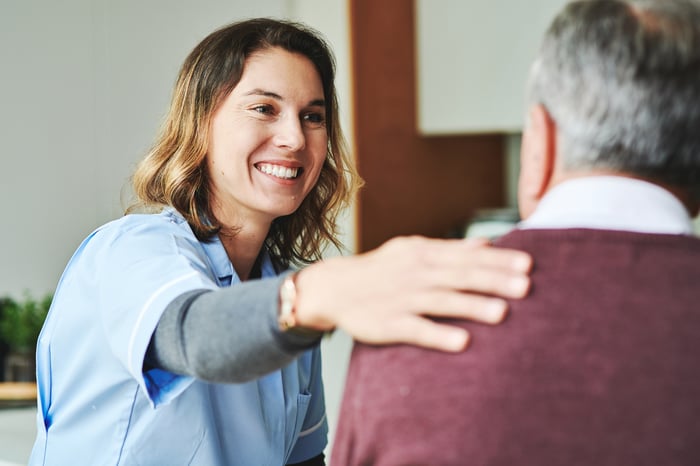 Over time, Clover is going to have to reverse this MCR number, bringing it below 100% and likely much lower if it wants to have a profitable business. For 2022, management is guiding for patients to grow 20% year over year and for an MCR of 95% to 99%. This would be decent progress in growing Clover's business, but still only brings the business's premiums just over its costs, which investors are likely not psyched about.

On top of these numbers, since Clover Health is very unprofitable right now, it decided to do a common stock offering. The company sold around 50 million shares at $5.75 a share, raising about $300 million. This was not an unexpected decision from management, but with the stock down over 50% since its special purpose acquisition company (SPAC) merger in 2020, investors were likely not enthused with the terms the company had with this deal.

Clover Health has a market cap of $2.1 billion and trades at a price-to-sales ratio (P/S) of 1.8 after this recent drawdown. This may seem cheap considering how fast Clover Health is growing. But if the business can't get its costs in order, it will never bring in a dime in earnings, no matter how much revenue it brings in. Until its MCR starts consistently moving in the right direction, it will likely be smart to stay away from Clover Health stock.