PayPal (NASDAQ:PYPL) pioneered the fintech industry in many respects when it facilitated payments via email in the 1990s. However, Square (NYSE:SQ) emerged as an increasingly visible competitor after introducing its smartphone credit card reader and steadily expanding its ecosystem.

But, amid this rivalry, investors may not notice that PayPal has taken more of a consumer focus than its peer. Through an emphasis on that target market, the fintech stock has become well-positioned to continue to drive long-term stock gains. 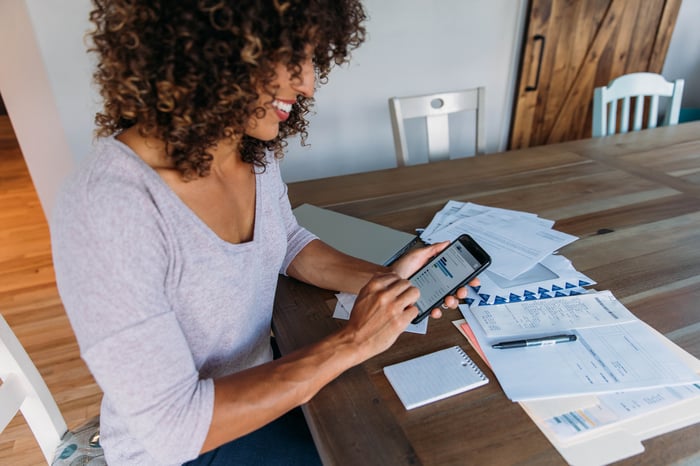 How Square and PayPal compete

Investors tend to assume that Square directly competes with PayPal. Although Square designed a more business-oriented ecosystem than PayPal, that assertion is undoubtedly true when it comes to social-payment platforms. Venmo (owned by PayPal) and Cash App (owned by Square) remain locked in a competitive battle for market supremacy. Cash App recently claimed 70 million users, only slightly lagging the 80 million claimed by Venmo. Cash App's usage surged quickly during its move into Bitcoin trading. This move eventually forced Venmo to offer cryptocurrency trading on its platform.

Research and Markets forecasts the fintech industry will increase at a compound annual growth rate of 27% through 2026. If this prediction proves accurate, both PayPal and Square can continue to benefit from industry expansion for years to come.

Additionally, outside of social payments, PayPal often holds the advantage on the consumer side. PayPal entered the interest-free, buy now, pay later (BNPL) market first then expanded it by $2.7 billion for Japanese BNPL company Paidy. Square responded but only by paying a much higher price, $29 billion, for Afterpay. Furthermore, PayPal's purchase of Honey brought discounts from more than 30,000 retailers to its platform. In contrast, Cash App requires the use of a company-issued debit card to earn discounts.

PayPal's approach helped it generate $18.5 billion in the first nine months of 2021. This was a 20% increase from the same period in 2020. The rising revenue helped the company earn $3.4 billion in net income in the first three quarters of 2021, 28% more than in the first nine months of 2020. Limiting the operating expense growth to 17% along with a 96% reduction in income tax expenses helped offset the approximately 80% reduction in income from non-core sources.

This steady growth has not stopped PayPal stock from taking a bigger hit than Square over the last year. During that time, it lost 13% of its value versus just 5% for Square. This occurred as PayPal has fallen by almost 60% from its 52-week high. Despite that drop, PayPal has risen by more than 400% since the spinoff from eBay returned it to the public markets in 2015.

Moreover, while Square has become risky at around 180 times earnings, PayPal trades at a price-to-earnings (P/E) ratio of 45. PayPal also maintains a lower sales multiple, selling for seven times sales versus nine for Square. That price-to-sales (P/S) ratio does not account for the fact that 60% of Square's revenue in the first nine months of fiscal 2021 was Bitcoin payment volume. Without the payment volume, Square would trade at a substantially higher sales multiple, making PayPal a significantly more affordable stock.

PayPal's different take on fintech provides an opportunity to investors. Even between the competition in social payments and business customers, PayPal stands out with its fintech offerings directly for consumers, allowing it to take the lead in specific fintech segments.

Lastly, PayPal has grown rapidly since it returned to the public markets, offering rising profits with a relatively low multiple. Given this valuation and its competitive advantages, PayPal should continue to play a key role in this burgeoning industry.