What are the three characteristics of a dividend stock that allow investors to build significant wealth over the long term? I would argue that those three attributes are a market-beating dividend yield, an above-average growth profile for the underlying company, and a reasonable valuation.

Let's take a look at why I believe the pharma stock AstraZeneca (NASDAQ:AZN) checks off all three of those boxes, making it an ideal investment you should consider for your portfolio. 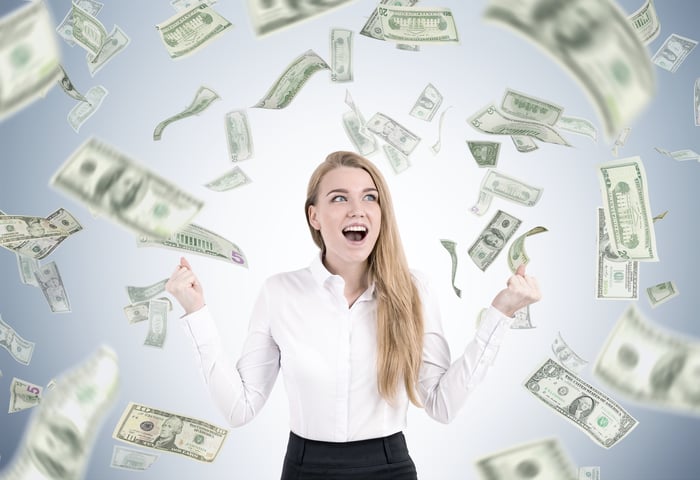 AstraZeneca reported $9.87 billion in total revenue during the third quarter, representing a 50% year-over-year growth versus the year-ago period while also beating consensus revenue estimates by about 3%.

Excluding the $1.31 billion in revenue from the rare disease segment that was formed upon completion of the Alexion Pharmaceuticals acquisition earlier this year, AstraZeneca's organic revenue was up 30.1% year over year during the third quarter.

The plurality -- or nearly 40% -- of AstraZeneca's revenue growth was driven by the rare disease portfolio, which includes the top three drugs in the segment, Soliris, Ultomiris, and Strensiq. Another 32%, or $1.05 billion, of the company's increased revenue during the third quarter was derived from its COVID-19 vaccine. The remainder of the company's revenue growth was scattered throughout AstraZeneca's oncology, cardiovascular, renal and metabolism, and respiratory and immunology drug portfolios, which each grew revenue well into the double digits for the third quarter.

AstraZeneca's top-line growth is what also led the company to deliver a healthy increase in its core earnings per share (EPS). The company's core EPS surged 14.9% higher year over year to $1.08 during the third quarter.

AstraZeneca's strong revenue growth in the third quarter was far from a fluke, which is supported by the company's deep pipeline of 175 projects. To this point, AstraZeneca has dozens of projects in its late-stage pipeline balanced throughout its multiple therapy areas. The projects in late stages of clinical research are precisely why analysts are forecasting that the company will be able to grow its EPS in excess of 20% annually over the next five years.

And with dozens more projects in early clinical trials, AstraZeneca looks to be set not just for the medium term but the long term as well.

AstraZeneca appears to have a strong pipeline. But what's just as encouraging is its vigorous balance sheet, because this can fund bolt-on acquisitions to strengthen its existing pipeline and diversify its future revenue even further.

For instance, the company's net debt-to-EBITDA ratio over the past 12 months is respectable at 3.1, considering the company just executed a large acquisition months ago. But factoring out a downward non-cash adjustment to Alexion Pharmaceuticals' inventory fair value, AstraZeneca's net debt-to-EBITDA is even better at 2.7, according to CFO Aradhana Sarin's opening remarks during AstraZeneca's Q3 2021 earnings call.

For a company of AstraZeneca's size, its $24.7 billion in net debt as of the third quarter appears to be manageable and suggests that the management team is carefully leveraging debt to create wealth for shareholders. Thus, it isn't surprising that AstraZeneca's long-term debt is rated A- by rating agency S&P Global.

A fair price given the stock's growth potential

Finally, it appears as though income investors can pick up shares of AstraZeneca's 2.5% dividend yield at an attractive valuation for the long haul. What led me to this conclusion?

Well, AstraZeneca at its current $55 share price is trading at a forward price-to-earnings (P/E) ratio of 14. While this is moderately higher than the drug manufacturers general industry average forward P/E ratio of 10.8, I would argue that this premium is completely justified. That's because out of the 19 other selected stocks in its industry, AstraZeneca's estimated 20.6% annual earnings growth over the next five years is easily the best growth profile in its industry.

Overall, AstraZeneca's mix of yield and growth at a decent valuation is one that income and growth investors alike could add to their portfolios to gradually build wealth.