Shares of Vertex Pharmaceuticals (NASDAQ:VRTX) spiked recently in response to good news for an experimental new drug. The past year has been marked by one development setback after another, but recent developments make it look like it has a chance to come back stronger than ever.

Successful results from a clinical trial with a drug that isn't part of the company's successful cystic fibrosis franchise are generating a lot of stock market buzz for Vertex Pharmaceuticals again. Here's a look past the top-line results to see if now's a good time to buy the stock. 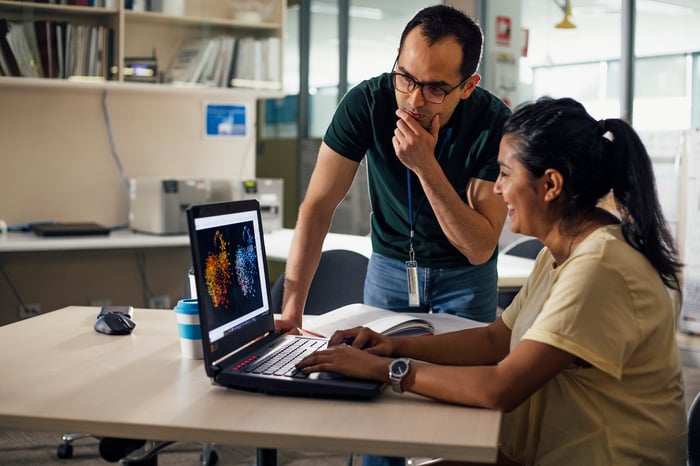 On Dec. 1, 2021, Vertex Pharmaceuticals' stock jumped after the company posted results from a human proof-of-concept study with VX-147. This is a first-in-class candidate for the treatment of APOL1-mediated kidney disease, a rare inherited condition that lacks effective treatment options.

The amount of protein in patients' urine samples, or proteinuria, fell by 47.6% on average after 13 weeks of treatment with VX-147. Proteinuria reduction is a commonly accepted sign of efficacy for kidney disease treatments.

Vertex designed VX-147 to specifically inhibit APOL1 to treat APOL1-mediated kidney disease (AMKD). In the U.S. and EU, an estimated 100,000 people have one of several proteinuric kidney diseases driven by mutated APOL1 proteins.

Patients with AMKD are relatively likely to advance to end-stage kidney disease. If VX-147 can keep AMKD patients from progressing to a stage that requires dialysis or a transplant procedure, healthcare plan sponsors can save a bundle.

The company plans to begin a pivotal study with VX-147 in the first quarter of 2022. That means we'll know if it can eventually produce blockbuster sales for Vertex before the end of next year.

After an infusion of VX-880, the single participant had significantly lower blood sugar after 90 days despite dramatically reducing their insulin usage. Vertex will continue with more diabetes patients and higher dosage strengths.

The current formulation of VX-880 requires patients to keep their immune system suppressed or it will attack their new insulin-producing islet cells. Vertex has an encapsulated islet cell program on deck to begin clinical trials next year that could eliminate the need for immunosuppression.

In addition to VX-880, Vertex Pharmaceuticals shareholders can look forward to a potential new gene therapy the company's developing in partnership with CRISPR Therapeutics (NASDAQ:CRSP). A single administration of CTX001 helped patients with sickle cell disease and beta-thalassemia end their reliance on blood transfusions for at least a couple of years and possibly longer. Vertex expects to submit an application for CTX001 to the U.S. Food and Drug Administration before the end of next year.

With VX-147, VX-880, and CTX001 on deck, Vertex has a good chance to continue producing double-digit sales growth year after year for more than a decade. Shares of Vertex Pharmaceuticals have been trading at the relatively low multiple of just 15.9 times forward earnings expectations. That's really low for a profitable company growing sales this quickly. Put it together and Vertex Pharmaceuticals looks like a great biotech stock to buy right now.