Shares of Digital Turbine (NASDAQ:APPS) sank 38.3% in November, according to data from S&P Global Market Intelligence. The stock fell after the digital-advertising company reported second-quarter results and continued to move lower as bearish momentum curbed valuations for growth-dependent stocks. 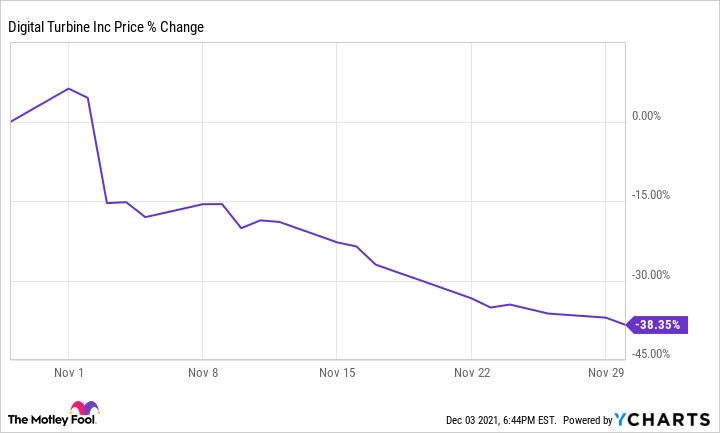 Digital Turbine published its Q2 results on Nov. 2, delivering sales and earnings for the period that came in ahead of the average analyst estimates. The company also issued forward guidance that topped the market's expectations, but these factors weren't enough to stop the stock from suffering big sell-offs last month.

Digital Turbine posted non-GAAP (adjusted) earnings per share of $0.44 on revenue of $310.2, while the average analyst estimate had called for adjusted per-share earnings of $0.39 on revenue of $306.5 million. On the other hand, the company's GAAP loss of $0.06 per share in the period was significantly worse than the $0.33 per share profit targeted by the midpoint analyst estimate. While the company delivered revenue and adjusted earnings beats, it looks like investors were looking for even better performance.

Digital Turbine stock has continued to slide early in December's trading. The company's share price is down roughly 7% in the month so far. 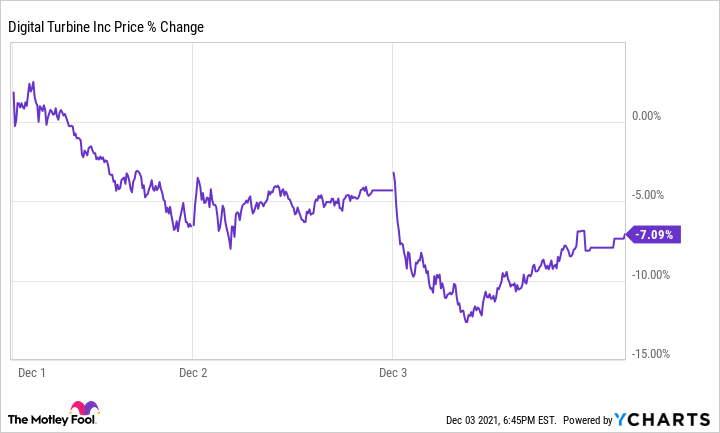 Digital Turbine is guiding for third-quarter sales to come in between $350 million and $355 million, which was above the previous analyst target for sales of $340.7 million. The company is targeting earnings per share between $0.41 and $0.44 for the period, which is in line with the analyst target prior to the company's Q3 report.

The advertising and software services specialist estimates that it will be able to reach sales of $4 billion and EBITDA of $1 billion within the next three to five years. Hitting those targets would mean increasing its sales four times and its EBITDA five times compared to current levels.

Digital Turbine now has a market capitalization of roughly $4.7 billion and trades at approximately 3.9 times this year's expected sales and 30 times expected earnings. The company has a growth-dependent valuation, but its business is expanding at a rapid clip, and there looks to be a long runway for growth in the digital ads market.