The stock market looked poised to continue its volatile performance on Monday morning. Although some reports over the weekend have suggested that the new omicron coronavirus variant might be less severe than many had feared, investors are still trying to understand the impact it might have on the global economy. Moreover, other macroeconomic factors remain highly uncertain, and that once again seemed to affect growth-oriented stocks to a greater extent. As of 8:30 a.m. ET, futures contracts on the Nasdaq Composite (NASDAQINDEX:^IXIC) were down 37 points to 15,681, even as other indexes signaled a possible up opening.

Electric vehicle (EV) stocks have gotten a lot of attention in recent months, so it's not surprising that most of the premarket news centers on Lucid Group (NASDAQ:LCID) and the fact that it recently received a subpoena from the U.S. Securities and Exchange Commission. However, when you pull back and consider more than just the past few days, you'll find a group of stocks that has fared far worse. I'll reveal those stocks later in this article, but first, let's see what's happening to Lucid.

Shining light on an EV SPAC

Lucid Group shares were down more than 16% in premarket trading on Monday morning. By itself, what the EV company said wasn't all that illuminating, but it raised an issue that could go well beyond just one particular company. 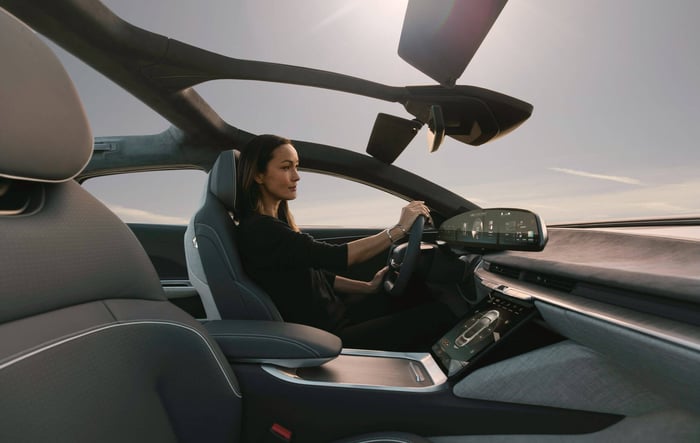 In its filing, Lucid merely said that it had received a subpoena to produce documents related to an SEC investigation. The company wasn't comfortable definitively stating the apparent target of the investigation, but it suggested that the SEC inquiry was most closely related to the transaction by which it went public. The then-privately held Lucid merged with special purpose acquisition company Churchill Capital IV, with the merger closing in July. Until 2016, Lucid had been known as Atieva, and Lucid's SEC filing refers to "the business combination between the Company (f/k/a Churchill Capital Corp. IV) and Atieva" as the likely subject of the investigation.

It's not terribly surprising to see Lucid become the subject of an investigation. Its stock has fluctuated wildly through 2021, with huge gains in February giving way to huge declines even before the Lucid merger was finalized. Subsequently, EV stocks have been gaining a lot of traction, leading to another substantial push higher.

However, some investors seem to think that Lucid is only one of what could become many companies getting closer SEC scrutiny, especially those that went public through SPACs. We'll just have to wait to see what comes from the Lucid investigation and whether more follow.

A bad weekend for crypto

As bad as Lucid's drop was, the stock has lost only about a quarter of its value in the past few weeks. That's actually less than the declines for Coinbase Global (NASDAQ:COIN), which was down about 5% in premarket trading. Smaller crypto companies have seen even bigger pullbacks, such as Riot Blockchain (NASDAQ:RIOT) and its 10% premarket decline and a similar drop for fellow miner Marathon Digital Holdings (NASDAQ:MARA).

Cryptocurrency prices were highly volatile over the weekend, with the price of Bitcoin (CRYPTO:BTC) plunging hard on Saturday to add to weakness late Friday. After trading above $57,000 around midday on Friday, Bitcoin was down to around $48,000 Monday morning. Some smaller cryptocurrencies saw more violent moves downward.

Investors have jumped into crypto aggressively, and that's led to companies like crypto exchange giant Coinbase and crypto mining companies focusing entirely on the space. Whenever the crypto market gets threatened, therefore, those specialists are likely to see the biggest moves.

Overall, Coinbase has benefited from its decision to focus on cryptocurrency. If something devastating happens to that market, then it would be equally devastating for Coinbase. However, much larger swings in crypto prices have happened in the past, so it's important not to draw too strong of a conclusion from the weekend's price movements.