The fifth-generation (5G) wireless market has been a happy hunting ground for investors in 2021, as evident from the 18%-plus gains scored by the Defiance Next Gen Connectivity ETF that invests in stocks of companies involved in the rollout of 5G infrastructure and services.

The New Year could turn out to be another solid one for 5G stocks as spending on 5G wireless infrastructure is expected to rise in 2022, while the number of 5G-enabled smartphones is also expected to jump higher. According to Gartner, 5G wireless network infrastructure spending could increase to $23.2 billion next year from 2021's estimate of $19.1 billion. Meanwhile, 660 million 5G smartphones are expected to be sold in 2022, according to TrendForce, up from 500 million units this year.

Investors can take advantage of the growth in 5G infrastructure and smartphones with the help of Skyworks Solutions (NASDAQ:SWKS) and Keysight Technologies (NYSE:KEYS), two companies that could clock impressive growth in 2022 and beyond. Let's see why. 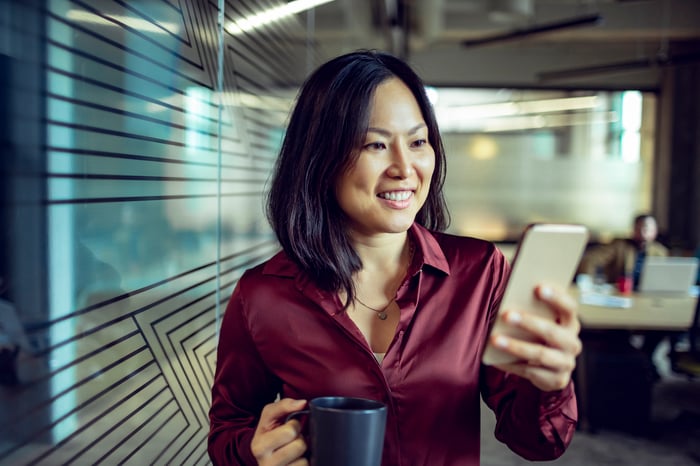 Skyworks Solutions is one of the best ways to play the 5G smartphone opportunity, thanks to its terrific customer base that includes nearly all the top smartphone original equipment manufacturers (OEMs). The company's 5G chips are used by the likes of Samsung, Vivo, OPPO, Xiaomi, and Apple.

It is worth noting that these five smartphone makers are expected to account for 80% of estimated 1.39 billion unit shipments in 2022, according to TrendForce. Apple is expected to be the second-largest smartphone manufacturer next year, with shipments of 243 million units and a share of 18%. This bodes well for Skyworks as Apple is its largest customer, producing 59% of its revenue in the recently concluded fiscal 2021.

Counterpoint Research estimates that Apple could corner 33% of the 5G smartphone market in 2021 thanks to the launch of the iPhone 13, which would be an improvement over last year's 5G market share of 24%. What's more, Strategy Analytics estimates that Apple could end up commanding 40% of the 5G smartphone market post the launch of the iPhone 13. That won't be surprising given the installed base of hundreds of millions of iPhone users that are in an upgrade window to buy a 5G device.

If Apple can keep it up, Skyworks Solutions can sustain its terrific fiscal 2021 performance in the new fiscal year as well. The company's revenue had increased 52% in the twelve months that ended on Oct. 1, 2021, while adjusted earnings shot up an impressive 71% year over year to $10.50 per share. The good part about Skyworks is that it has more than just its mobile business to drive growth.

The company also sells chips used in telecom infrastructure, the automotive industry, Internet of Things applications, smart homes, wearables, and Wi-Fi routers. Sales to these verticals are clubbed under the broad markets business segment, which recorded 31% year-over-year growth last quarter and accounted for 29% of the revenue.

Skyworks could keep growing at impressive rates in 2022 and beyond, thanks to the fast-growing markets it operates in. That's why investors looking to buy a 5G stock should take a closer look at this chipmaker, as it is trading at just under 17 times trailing earnings, which makes it cheaper than the five-year average earnings multiple of nearly 21.

Keysight Technologies provides networking test and measurement equipment for various industries ranging from communications to networking to automotive, among others. TechNavio estimates that the global communications test market could add $3.19 billion in revenue from 2020 to 2024, while another report from Frost & Sullivan estimates that the deployment of 5G and IoT solutions could send this market's revenue to nearly $19 billion by 2025.

This indicates that Keysight has a lot of room to grow its top line, as the company has only generated about $5 billion in revenue over the trailing 12 months. More importantly, Keysight reportedly commands a 47% share of the test and measurement equipment space, which places it in a solid position to take advantage of the end-market opportunity.

The tailwinds in the networking and measurement equipment market are driving solid growth in Keysight's order book. The company's orders in the fourth quarter of fiscal 2021 increased 21% year over year to $1.49 billion. This was way higher than the company's actual revenue growth of 6% for the quarter.

What's more, Keysight is entering the new fiscal year with a backlog of more than $2 billion. Throw in the fact that the company has built a strong client base involved in the rollout of 5G services, and it won't be surprising to see it sustain the impressive growth that it has clocked in the past year. 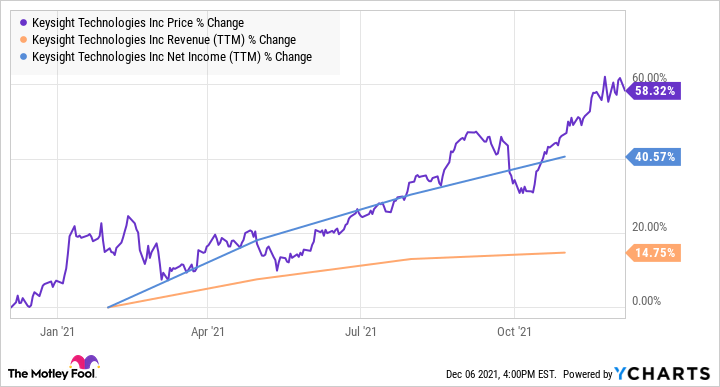 Keysight management pointed out on the latest earnings conference call that it is "winning engagements with industry leaders like NXP, NEC, and MediaTek," it has joined Google's Cloud partner initiative to support the deployment of 5G services at the edge, and has collaborated with "Lockheed Martin to advance 5G in support of mission-critical communications for aerospace and defense applications."

Finally, Keysight stock is available at an attractive valuation right now. The company's trailing price-to-earnings (P/E) ratio of 41 is lower than the five-year average multiple of 50. The forward earnings multiple of 28 points toward a nice bump in the bottom line, which makes Keysight a stock worth considering for investors looking to take advantage of the 5G infrastructure market's growth.