The catalyst that drove up the database-as-a-service provider was third-quarter financial results that sailed past even the most bullish expectations.

MongoDB delivered revenue of $226.9 million, up 50% year over year, calming investor fears that its growth might slow. At the same time, the company delivered an adjusted loss per share of $0.11, cutting its red ink by two-thirds. 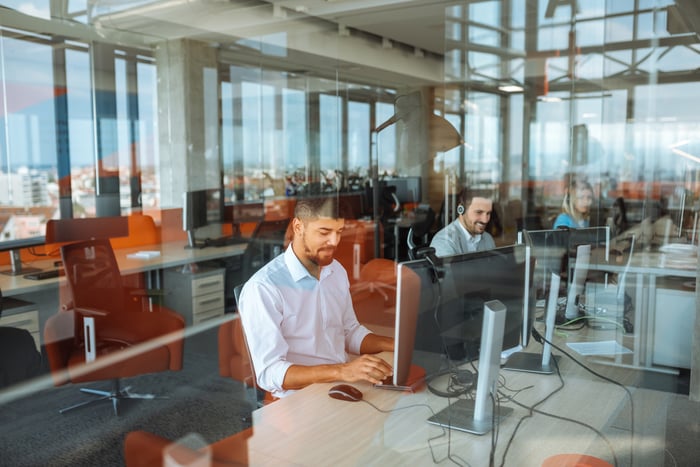 To give those numbers context, analysts' consensus estimates were calling for revenue of $205.3 million and an adjusted loss per share of $0.38.

MongoDB continues to burn cash, but there are signs that the tide may be turning. Free cash flow was negative $9.2 million, improved from negative $14.9 million in the prior-year quarter.

MongoDB gave investors other reasons to cheer. The company provided its fourth-quarter forecast, which was more robust than expected.

Management is guiding for revenue of $240.5 million at the midpoint of its guidance, which would represent growth of roughly 41% year over year. MongoDB is also forecasting an adjusted loss per share of about $0.22, much improved from its per-share loss of $0.33 in the prior-year quarter.

Its guidance was much better than analysts' consensus estimates, which were calling for revenue of $237.4 million and a loss per share of $0.26.

The stock isn't cheap using traditional valuation metrics, with a price-to-sales ratio of 43, but investors have largely given the company a pass due to its continued strong growth.

Furthermore, this marks the third consecutive quarter the company has had a beat and raise -- surpassing analysts' expectations, while boosting its guidance -- which was sufficient to send MongoDB's stock surging higher.