Investors' attraction to biotechnology reached a fever pitch at the beginning of 2021. Since then, things have gone from bad to worse. The benchmark SPDR S&P Biotech ETF (NYSEMKT:XBI) recently started to recover, but it's still down more than 33% from a peak it reached this February.

These three biotech stocks have fallen hard recently along with the rest of their industry. Is this a chance to pick up one or more former high flyers at a bargain-basement discount? Read on to find out. 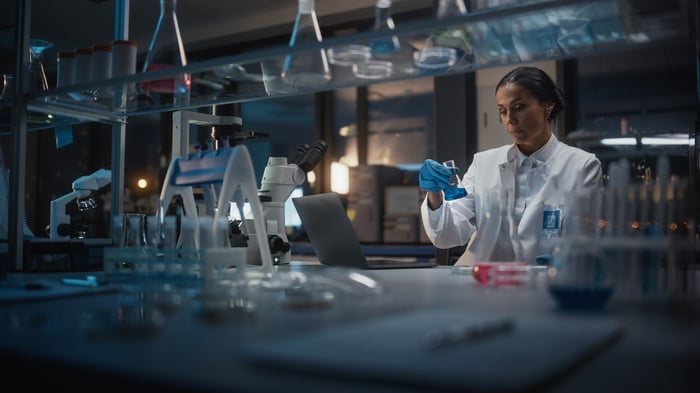 Editas Medicine (NASDAQ:EDIT) shares are down a whopping 54% over the past three months. It's been falling harder than most biotech stocks this year thanks to disappointing clinical trial results for its lead candidate, EDIT-101. This is a CRISPR-based gene therapy injected into the eyes of patients with Leber Congenital Amaurosis 10 (LCA10).

LCA10 is a rare inherited disease that causes rapid vision loss, and treatment with EDIT-101 is supposed to prevent or reverse the damage. While there were some signs of improvement for the first five patients treated, those signs weren't strong enough to generate much confidence.

The only other clinical-stage candidate in Editas Medicine's pipeline is one for sickle cell disease called EDIT-301. Potential competition from a similar treatment candidate CRISPR Therapeutics is developing in partnership with Vertex Pharmaceuticals makes EDIT-301's future look more challenging than EDIT-101's.

It's been more than two years since Editas Medicine began its first clinical trial, and we still aren't sure about its potential. The company finished September with a healthy cash balance of $657 million after losing $214 million over the past 12 months of the year. The achingly slow pace of development we've seen from Editas Medicine suggests it will run out of cash long before it has an approved drug to sell. Despite the dramatic price drop this year, this stock still looks too risky. 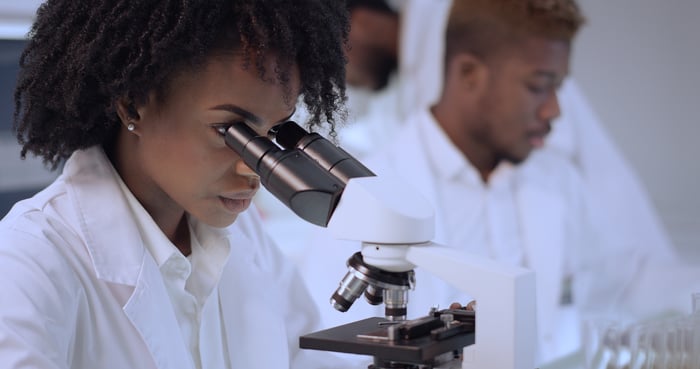 Adagio Therapeutics (NASDAQ:ADGI) stock soared near the end of November, but it's already fallen around 31% in December. So it goes in the fast-paced world of COVID-19 antiviral drug development.

The stock shot up when investors learned that none of the mutations present in the omicron variant were associated with escape from the company's lead candidate, an antiviral antibody called ADG20. The previous day, Regeneron warned that its antibody combination treatment, REGEN-COV, might be less effective at fighting omicron.

After some observation, it appears ADG20's ability to contain omicron wasn't such a big deal. On Tuesday, GlaxoSmithKline said the antibody treatment for COVID-19 it's developing in partnership with Vir Biotechnology is effective against the omicron variant.

Adagio Therapeutics doesn't have a timeline regarding a U.S. Food and Drug Administration (FDA) emergency use authorization request for ADG20. In the EU, the company expects to submit applications beginning in mid-2022.

At recent prices, Adagio Therapeutics' $4 billion market cap suggests a great deal of success down the road for ADG20. It's probably best to wait for results from the Stamp trial, which are due in the second quarter of 2022, before considering this stock a bargain. 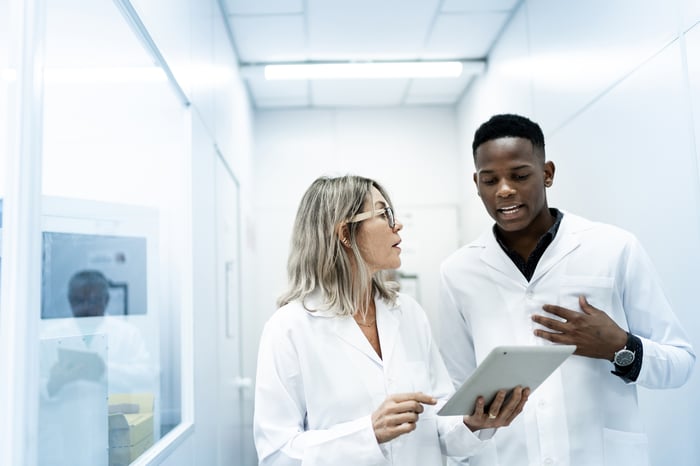 Reata Pharmaceuticals (NASDAQ:RETA) stock has fallen around 65% from a peak it reached in June. The latest plunge happened in response to public briefing documents the FDA provided an independent advisory committee ahead of a meeting set for 9:30 a.m. on Dec. 8, 2021.

The bottom fell out from under the clinical-stage biotech stock after the briefing document made it clear the company didn't follow the agency's instructions. Reata Pharmaceuticals is trying to earn accelerated approval for bardoxolone as a treatment for chronic kidney disease caused by Alport syndrome.

The FDA's stance didn't surprise Reata Therapeutics, but investors were caught unaware. The agency told the company from the start that accelerated approval based on filtration rate reductions alone aren't a good idea.

Reata Therapeutics' chance of earning accelerated approval for bardoxolone is extremely low, but the company has a second candidate with an application on the way to the FDA. A submission for omaveloxolone as a treatment for Friedreich's ataxia is slated for the first quarter of 2022.

After seeing the company ignore advice from the FDA, Reata Therapeutics doesn't look like a bargain. In fact, it's probably best to avoid this biotech stock until the company learns to take direction from the folks holding the keys to the castle.