The stock market was having a generally negative day on Friday, with both the Dow Jones Industrial Average and S&P 500 firmly in negative territory at noon ET. Most bank stocks weren't faring much better, as megabank JPMorgan Chase's lowered guidance put negative pressure on most of the sector.

Wells Fargo (NYSE:WFC) was a big exception. The consumer-focused bank stock was rising, with shares up by more than 3% after being up as much as 5% earlier in the day. 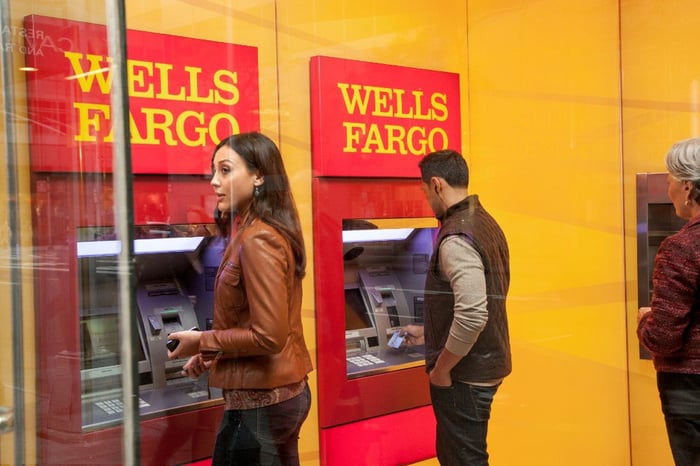 Wells Fargo reported its fourth-quarter earnings before the open on Friday, and unlike with JPMorgan Chase, investors seem thrilled with the results. And it isn't difficult to see why.

Starting with the headline numbers, Wells Fargo's revenue came in at $20.86 billion, more than $2 billion higher than analysts had been expecting. On the bottom line, net income grew by 86% compared with the fourth quarter last year, handily beating expectations as well. The bank's numbers were partially fueled by a $875 million reserve release after pandemic-related loan losses weren't nearly as bad as feared.

CEO Charlie Scharf specifically called out stronger consumer spending and growth in asset management fees, and he also said that consumer lending strengthened as the year went on. Plus, the bank aggressively bought back its own stock, with $7 billion of repurchases in the fourth quarter alone.

These numbers are certainly impressive. But 2022 could be another year of major growth for the bank, as its consumer-focused business model puts it in a great position to benefit as interest rates begin to rise. JPMorgan Chase CEO Jamie Dimon said that the Federal Reserve could end up raising rates as much as six or seven times in 2022 to combat inflation, and this could be a big boost to Wells Fargo's net interest income.