For the second time in three days, shares of the Earth imaging satellites operator Planet Labs (NYSE:PL) are up, soaring 11.2% as of 1:05 p.m. ET on Friday.

And not without reason. 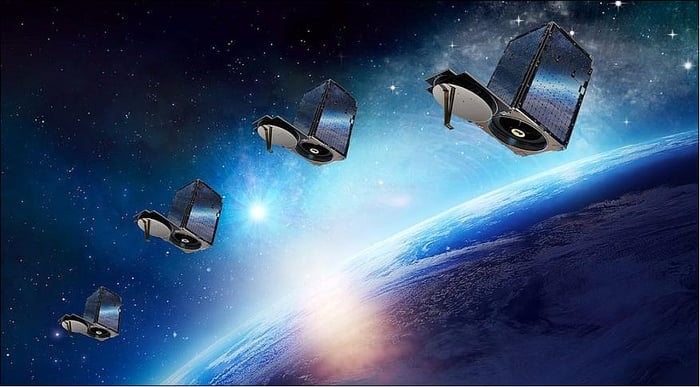 Planet Labs operates on an iterative business model in which it's constantly sending new satellites up, letting them expire and burn up in the atmosphere after a few years' service, and replacing them with new and improved models. As this process progresses, the company is rapidly phasing out its initial photo-satellite complement of "Dove" satellites, replacing them with SuperDove satellites that can see clearer and take more pictures per day than the ones they replace.

We saw this process in action yesterday, when Planet sent a flight of 44 new SuperDove satellites up into orbit atop a Falcon 9 rocket in SpaceX's first "Transporter" smallsat express launch mission of 2022. As Planet announced, this "4x Flock" of satellites successfully phoned home to Planet Labs and indicated it had established "100%" connection with Dove satellites already in orbit "within two minutes of final deployment."

Thus, yesterday's mission was a total success for Planet. With 4x Flock flying around up there, Planet now has approximately 244 satellites in orbit snapping round-the-clock snapshots all around the globe.

For the next three years, 4x Flock will stay in orbit and help to generate Planet's $124 million in annual revenue -- and the upgrade probably only cost Planet an incremental $13.2 million (based on the CEO's estimation that it costs $300,000 per SuperDove to build and launch).

It's good news for Planet, and good reason for Planet stock to be going up today.