Shares of South Korean e-commerce leader Coupang (NYSE:CPNG) fell as much as 20% this week, before bouncing slightly to finish the week down 18.3%.

There wasn't any news out of the company itself this week, so the sell-off likely had to do with macroeconomic factors, as investors became worried about inflation and the path of interest rate hikes this year. 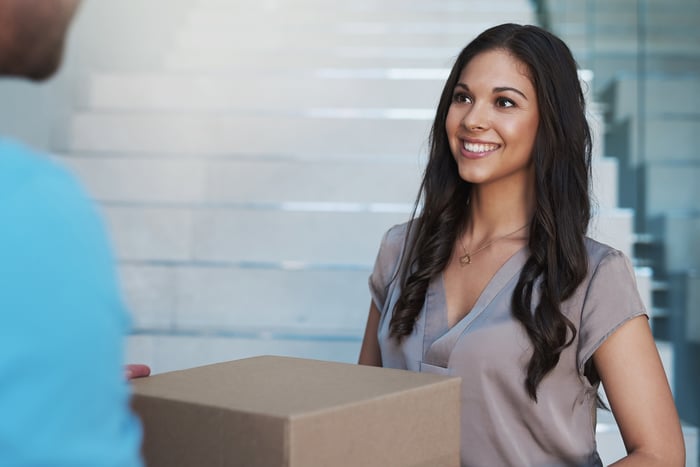 On Wednesday, the consumer price index (CPI) for December was released, which showed inflation rising 7% over the prior year. Excluding food and energy, "core" CPI came in at a lower 5.5%. The overall CPI was the highest on record since 1982 and the core number was the highest since 1991. Then on Thursday, the producer price index figures for wholesale prices in the economy were released, showing a 9.7% rise over the previous year. As if that weren't bad enough for sentiment, on Friday, JPMorgan Chase CEO Jamie Dimon commented he thinks the Federal Reserve could hike interest rates more than officials and analysts currently predict.

The potential for rates rising faster than many expect usually means growth stocks will fall, and that's exactly what Coupang did. Last quarter, Coupang recorded solid revenue growth of 48%, but its net losses actually increased by an even greater 87% as the company invested in growth. Coupang is even losing money on an adjusted EBITDA basis, but EBITDA losses did grow at a lower rate of 17%, so margins there actually improved.

Still, since loss-making companies are harder to value, they are being hit particularly hard as rates rise.

This bad week came on the heels of a 12.7% decline last week, so investors may be wondering if we are near a bottom. Currently, Coupang trades at $21.20, down 60% from its IPO price last March.

That's pretty ugly, but it's also good that Coupang raised money near the top of the growth stock surge early in 2021. After raising $4.6 billion, the company now has around $4 billion in cash as of the third quarter and very little debt. The current market cap is about $37.4 billion, just a little over two times trailing-12-month sales. That also seems like a fairly reasonable price to pay for this e-commerce retailer.

It's still very difficult to know if Coupang and other stocks like it are bottoming or if there is still more to go. The company is a leader in South Korea and appears to be executing fairly well. Although net losses increased, Coupang's gross margins improved last quarter, as gross profits grew 62% -- much faster than revenue.

That seems to indicate Coupang will one day be profitable; however, given its big investments in new offerings such as food delivery and other measures to fend off competitors, it's hard to see when that will happen. Still, for those looking for well-run growth or international stocks after this difficult three-month stretch, Coupang should be on your watch list.