Please ensure Javascript is enabled for purposes of website accessibility
Log In Help Join The Motley Fool
Free Article Join Over 1 Million Premium Members And Get More In-Depth Stock Guidance and Research
By Jamie Louko - May 13, 2022 at 5:45AM

As earnings season heats up, many companies that have been clobbered over the past year are reporting strong quarterly earnings. One company in this boat is Block (SQ 11.07%), which has fallen more than 74% from its all-time highs. However, it continued to report strength in its core businesses in the first quarter of 2022, which was reported on May 5.

Block is one of the leading fintech platforms for both consumers and small and medium-sized businesses (SMBs). The company was hurt by Bitcoin this quarter, but Block's bread and butter -- fintech products for sellers and consumers -- continued to execute. With the impressive strides it made this quarter, I think investors should take advantage of these lowered valuations and add some shares today. 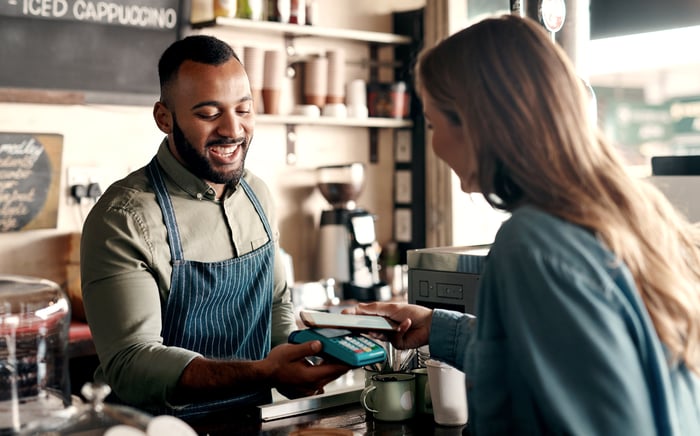 The company's Bitcoin revenue was the primary lowlight in Q1, dropping more than 50% year over year to $1.7 billion. This caused total revenue to decline 22% over the same period. The company earns revenue from consumers buying Bitcoin on its platform, but these transactions provide almost no profit to Block. In Q1 2022, for example, the company's cost of Bitcoin revenue was $1.69 billion, so the gross margin on this revenue is almost zero.

This also sheds some light on an important risk that Block faces: It might be too reliant on Bitcoin. The company is focused solely on this one cryptocurrency, rather than a variety, which could prove to be a mistake over the long term. The crypto market today is very young and changing rapidly, so there's no guarantee that Bitcoin will thrive during the next decade.

Thus, it might be better for Block to take a diversified approach by offering transactions for multiple cryptocurrencies -- but it doesn't seem to have any interest in doing that. This strategy could benefit the company when Bitcoin buying activity soars higher, but it also faces the ramifications of a Bitcoin fall and consumers buying less, which is what happened this quarter. The focus on Bitcoin also serves as a disadvantage for Block over other fintech platforms that allow transactions involving multiple cryptocurrencies, which might be more appealing to crypto investors.

The company's purchase of Afterpay also started to pay off this quarter. The acquisition of the buy-now, pay-later service closed on Jan. 31, and over the rest of the quarter, it contributed $92 million in gross profit. Importantly, Block continued to grow organically. Excluding Afterpay, Block's gross profit rose 25% year over year, showing that the company isn't relying on Afterpay for the majority of its gross-profit gains.

One big opportunity for Block is international expansion, and the company is making solid progress on this front. In Canada, Block introduced Square Loans to SMBs. Square Loyalty -- which makes it easy for businesses to build loyalty programs -- and Square Marketing were also brought to Ireland this quarter. These additions allow international businesses to lean more heavily on the Square ecosystem, creating high switching costs like those that drove Block to success in the U.S. In Q1, international revenue made up 12% of Square gross profit, up from 8% in the year-ago quarter.

The company also saw success in expanding its relationship with larger sellers. In Q1, its gross profit from businesses with more than $500,000 in annualized gross profit volume jumped 54% year over year to $14 billion. Now, that group is the biggest customer cohort in terms of gross profit generation. These larger sellers are lucrative because they have more money to spend on Block's products than smaller customers, so more of them will benefit the company in future.

Why the stock is worth buying today

While Block's concentration in Bitcoin is a big risk, the company's core businesses are thriving, and it's capitalizing on its potential. This puts Block in a great position for the future, and makes it an attractive investment today.

Why Are Block, PayPal, and StoneCo Plunging?