Please ensure Javascript is enabled for purposes of website accessibility
Log In Help Join The Motley Fool
Free Article Join Over 1 Million Premium Members And Get More In-Depth Stock Guidance and Research
By Jim Halley - May 13, 2022 at 11:52AM

The company's progress for its lead therapy has been slow.

Shares of Editas Medicine (EDIT 0.81%), a genome editing biotech company that uses CRISPR/Cas9 and CRISPR/Cas12a genome editing systems to develop therapies, saw its shares plummet 28.9% this week, according to data from S&P Global Market Intelligence. The stock closed last Friday at $13.66 but fell to $9.71 by Thursday, its 52-week low. The stock's 52-week high is $73.03. The stock is down more than 59% this year. 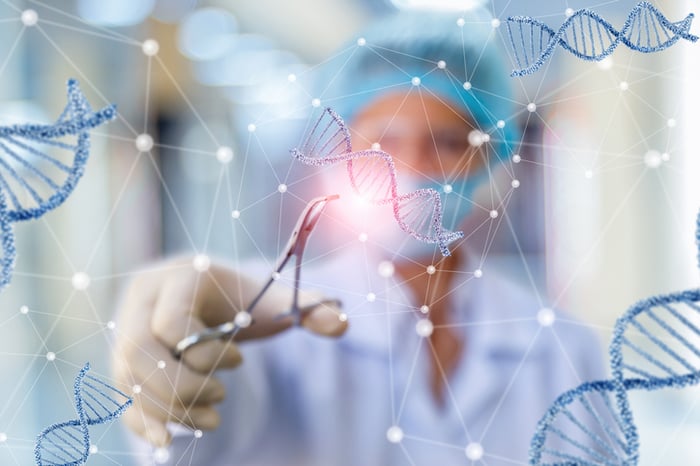 The stock has been swept up in what has been a truly awful year so far for tech, with the tech-heavy NASDAQ Composite Index down more 25% so far this year. Editas' shares have steadily fallen this year, but it is hardly alone among gene-editing companies. Intellia Therapeutics is down more than 63% so far this year while CRISPR Therapeutics has seen its shares drop more than 38%.

None of those gene-editing companies are profitable, but Editas' financial situation doesn't appear to be improving much. In its first-quarter earnings report earlier this month, the company showed signs that it is tightening its belt, but it is still losing money. Editas said it has $566.4 million in cash as of March 31, compared to $619.9 in the prior quarter. It said that was enough cash to fund operating expenses into early 2024. Without any marketed products, that means it is likely the company will have to sell more stock to raise money soon -- diluting the shares for current investors.

The biotech company lost $50.5 million, or $0.74 in earnings per share (EPS), an improvement over its $56.7 million loss and EPS loss of $0.86 in the first quarter of 2021. More concerning to investors is the lack of progress by the company's lead therapy, EDIT-101, a treatment for Leber congenital amaurosis 10, a genetic eye disorder that causes degeneration of the retina. The Food and Drug Administration (FDA) accepted Editas' Investigational New Drug (IND) application for EDIT-101 in 2018, but nearly four years later, the therapy is still in early trials.

On top of that, the company has had significant turnover in the C-suite, with Gillmore O'Neill slated to take over as CEO in June, becoming the fourth CEO for the company since 2014.

CRISPR technology is still thought of as the next breakthrough wave in medicine. That doesn't mean that Editas is the gene-editing company that investors should be backing. Regardless, it's important to take the long view with any gene-editing company, as the science is still relatively new. Investors want to see more progress on the science side for Editas, such as it announced Thursday after the market closed. In the release, the company said the FDA had granted Orphan Drug Designation to Editas' therapy EDIT-301, a treatment for beta thalassemia, a genetic blood disease. Editas said it plans now to dose the first patient in a Phase 1/2 clinical trial for EDIT-101 sometime this year.