Please ensure Javascript is enabled for purposes of website accessibility
Log In Help Join The Motley Fool
Free Article Join Over 1 Million Premium Members And Get More In-Depth Stock Guidance and Research
By Reuben Gregg Brewer - May 18, 2022 at 4:11PM

The storage products retailer posted solid sales and earnings for its fiscal 2021, and updated its long-term growth plans.

Shares of The Container Store (TCS 1.27%), a retailer with a focus on storage and closet items, rose as much as 12.5% in early trading on Wednesday. The big news was the company's fiscal fourth quarter 2021 earnings release, which hit the market after the close Tuesday. While the stock gave back almost half of that gain to end the session up by 6.8%, the broader market closed the day deep in the red, with retailers particularly hard hit. So that gain was still pretty impressive, relatively speaking.

In the fourth quarter of its fiscal 2021, which ended April 2, The Container Store's sales totaled $305.5 million, down slightly compared to the prior-year quarter. That comparison, however, isn't clean, because its fiscal 2020 Q4  included an extra (fourteenth) week. Notably, sales in the quarter were up 26.6% from fiscal 2019's (13-week) fourth quarter. 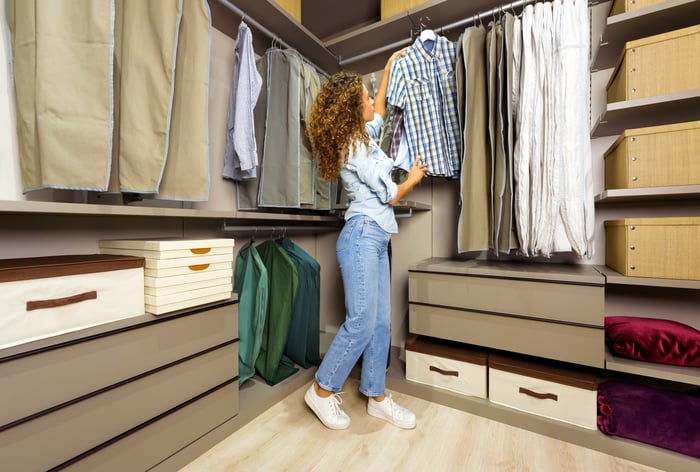 On the bottom line, The Container Store reported adjusted earnings per share of $0.46, down from $0.71 in the prior-year period, but up from the $0.30 earned in fiscal Q4 2019. For the full fiscal year, the company booked earnings per share of $1.65 compared to $1.24 in fiscal 2020 and $0.30 in fiscal 2019. Once again, the retailer appears to be heading in the right direction, noting that capital spending needs are material when a small company is still expanding its business. (The Container Store's market cap is only around $380 million.)  It's not shocking that investors were pleased with the results: Both sales and earnings came in above analysts' consensus estimates.

Adding to the stock's allure, management also came out with long-term guidance that calls for the company to surpass $2 billion in sales by 2027. Driving that will be comparable-store sales growth in the low-single-digit percentages and the planned opening of 76 new stores. There are two store openings planned for fiscal 2022. When all is said and done, the big takeaway here is that The Container Store remains a fast-growing retailer. While a recession might make management's targets harder to achieve, given the company's record-setting success in fiscal 2021 and its business expansion since 2019, there's no reason to doubt its ability to live up to those heady growth promises eventually.