2022 has been brutal for early-stage biotech companies. Cathie Wood's Ark Genomic Revolution ETF is down 60% over the past year. Wood's long-term performance is outstanding, however, even after that huge drop. Some of her stocks have gotten a lot cheaper in the short term. But the potential upside remains huge.

Our roundtable group dug into her holdings and found three stocks that we particularly like. Here's why we're bullish on 10x Genomics (TXG -1.52%), Beam Therapeutics (BEAM 2.16%) and Recursion Pharmaceuticals (RXRX 0.11%). 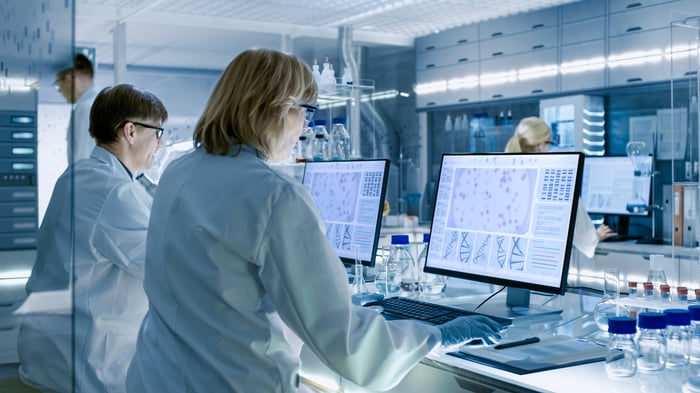 A market leader in a $15 billion market

Patrick Bafuma (10x Genomics): If you browse Ark Invest holdings, you'll see plenty of moonshots. And once in a while, you find companies that are already generating sales. 10x Genomics fits that mold, guiding for full-year 2022 revenue of $600 million to $630 million, which represents 22% to 28% growth over full-year 2021 revenue. And despite over half a billion in revenue, this life-sciences company is still in the early stages of growth.

This cutting-edge instrument maker sells the machines and associated consumables that allow scientists to look into and around an individual cell, a scientific subspecialty referred to as spatial biology. This method provides researchers with insights at unprecedented resolutions. The company's tools are already installed in all of the top 100 research institutions worldwide, proving that its product lineup is essential for today's research. Scientists have to be using 10x's toolset or risk getting lapped by competitors. The company's strategy to enable as many researchers as possible to become routine users of its tools is working, having found that customers who own its instruments consistently increase their usage over time. That situation leads to increased sales of high-margin consumables from 10x Genomics. Sound familiar? This razor-and-blade model is similar to how Illumina (ILMN -0.95%) became a monster for shareholders over the past two decades.

This Cathie Wood darling has plenty of runway in the $60 billion-a-year addressable market that is life-science tools. 10x believes that $15 billion of that is in the spatial biology research field that it already dominates. The field is essentially a one-horse race, with no other spatial biology research tool being utilized in half as many publications as 10x Genomics' tools. It is clear this instrument maker is the market leader for this growing nascent field of spatial biology. And with a steady cadence of new product launches, I believe this life-sciences company has the best chance of any of Wood's biotech holding to deliver monster returns.

A possible home run stock trading at a steep discount

George Budwell (Beam Therapeutics): Cathie Wood's Ark invest has been a shareholder of the precision genetic medicine company Beam Therapeutics since the fourth quarter of 2020, according to Whalewisdom. Now, during this roughly two-year holding period, Beam's stock appreciated by nearly 40%, which is definitely a respectable rate of return for such a short holding period. Having said that, the precision genetic medicine company's shares have also cratered by a staggering 73% since hitting an all-time high less than a full year ago, back in July 2021.

What's been weighing on this biotech stock over the past year? The good news is that Beam's business plan hasn't run into any major setbacks. Rather, market sentiment has turned exceedingly sour against early-stage research and development companies like Beam.

Why might this sharp pullback be a compelling buying opportunity? Beam's key selling point to investors is that its proprietary base editing technology could be a best-in-class platform to develop functional cures for scores of diseases. So, in theory, Beam could come to dominate numerous high-value markets, such as rare blood diseases, inherited genetic disorders, and perhaps some cancers. That's a tremendous commercial opportunity for a company with a sub-$3 billion market cap at the time of this writing.

What's the main downside risk with this stock? Precision gene editing, as a field, is still in its infancy. What's more, several companies are attempting to bring their unique gene-editing platforms to market. Put simply, there is no way to reliably handicap which one of these companies will take home the gold, so to speak. That doesn't mean Beam's equity isn't worth taking a chance on. But investors shouldn't go overboard with this speculative gene editing play, either.

Taylor Carmichael (Recursion Pharmaceuticals): One of the scary aspects of investing in drug development is the high failure rate: 90% of potential drugs fail to make it out of clinical trials. How can we improve upon that success rate?

Recursion has a radical idea. What if we abandon the "hypothesis" model of drug development? Traditionally in finding new medicines, a scientist would have an idea and then try to confirm it. But what if we approach a disease without a hypothesis? Instead, one would map the cell data visually and then look at what the data tells us. That might improve the success rate.

This approach results in drug discovery that is both faster and cheaper. On average, Big Pharma spends about $22 million to find a drug ready for clinical development, and that process takes about two and a half years. Recursion is spending $7 million to find a similar drug, and it's taking about 10 months.

Not surprisingly, Big Pharma has taken notice. Roche (RHHBY -0.15%) and Bayer (BAYR.Y -0.21%) are now collaborating with Recursion. And up-front payments are escalating. Recursion received $80 million in 2020, and $230 million last year. And the future milestone payments are getting bigger: $1 billion in potential milestone payments in 2020 has increased to up to $13 billion today.

It's still early, and in this risk-averse market, the stock has really been whacked. It's down 75% over the past year. But the business news has actually been strong. Recursion now has multiple drugs in clinical trials. And it's sitting on about $600 million in cash, roughly half of its market cap. If the company reports positive trial data later this year, the stock will dramatically recover. Risk-tolerant investors might want to open up a small position now.