Investors should be able to count on recurring income with these stocks.

Guess which stocks tend to perform better than most during market downturns? If your answer is solid dividend stocks, you're exactly right. 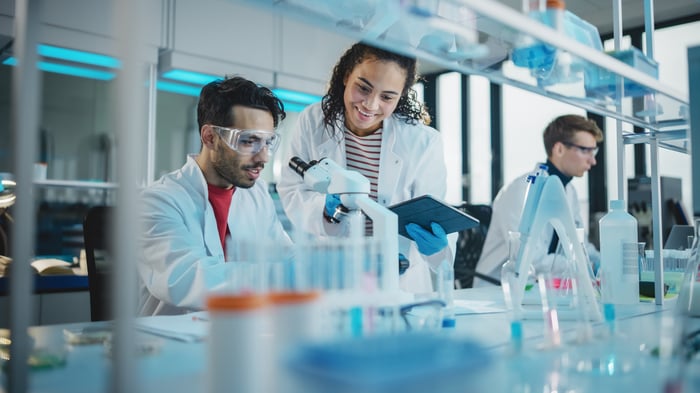 The king of big pharma?

Keith Speights (AbbVie): Make no mistake about it: AbbVie is a king. More precisely, the drugmaker is a Dividend King thanks to its 50 consecutive years of dividend increases. This member of royalty is also quite generous, with its dividend yield currently topping 3.8%.

AbbVie has been a solid winner so far in 2022 as well. The stock is up nearly 10%, easily trouncing the major market indexes.

And the future looks great for AbbVie, too. You could even make an argument that the company will soon be crowned as the king of big pharma. Market researcher EvaluatePharma would likely agree. It projects that AbbVie will be the biggest drugmaker in the world in 2028 based on total prescription drug sales.

That prediction might seem suspect considering that AbbVie's top-selling drug Humira loses U.S. exclusivity next year. However, the company thinks that its newer autoimmune-disease drugs Rinvoq and Skyrizi will together generate peak sales even greater than Humira's sales.

AbbVie also has other growth drivers in its lineup. They include blood cancer drug Venclexta, antipsychotic drug Vraylar, and migraine drugs Qulipta and Ubrelvy.

Will AbbVie really reign at the top of the biopharmaceutical world in a few years? Maybe, maybe not. Either way, I have full confidence that the company will continue to offer one of the most attractive dividends around.

A solid dividend and so much more

Prosper Junior Bakiny (Novartis): Seasoned dividend investors know that a high dividend yield and a conservative payout ratio mean little unless they are backed by a solid business. Fortunately, pharma giant Novartis offers all three of those things. The drugmaker currently boasts a dividend yield of nearly 3.7% -- much higher than the S&P 500's average of 1.4%. Novartis' payout ratio of 31% is well below the 60% that is typically considered good; it suggests plenty of room for future payout increases. Further, Novartis benefits from a key advantage it shares with other drugmakers.

Most people don't consider lifesaving medicines to be luxury items. Even during economic downturns, patients are unlikely to cut back on the drugs they need to stay healthy. And in that department, Novartis has plenty to offer. The company's lineup features immunosuppressant Cosentyx, heart failure medicine Entresto, asthma therapy Xolair, and gene-editing therapy Zolgensma, among many others.

It's essential for a pharmaceutical company to have a rich pipeline to expand its lineup and smooth out losses from patent cliffs. Novartis excels in this area too. The company has more than 150 programs in clinical development. That includes 52 ongoing phase 3 clinical trials.

Even assuming a modest success rate of 25% for its late-stage studies, Novartis should be able to earn new brand approvals or label expansions regularly. The company reported three regulatory nods during the first quarter. Novartis can continue growing its revenue and profits for a long time, especially as it benefits from tailwinds such as the world's aging population and an increased need for medicines.

In short, Novartis' juicy dividend yield, conservative payout ratio, and solid business make the company an excellent option for income-seeking investors and even for those who are shopping for a reliable company whose shares they can hold on to for a while.

A high yield and plenty of cash

David Jagielski (Viatris): I think that Viatris stands out as a great deal for investors. The healthcare company is relatively new, formed through a combination of Pfizer's Upjohn business and drugmaker Mylan in 2020. Viatris is already generating some encouraging results.

The company reported positive first-quarter earnings numbers last month. Q1 net earnings totaled $399.2 million. However, Viatris' revenue of $4.2 billion declined by 5% year over year. Given the macroeconomic challenges such as supply chain issues and rising inflation that companies are facing right now, it's not an awful result by any means.

The more important number for income investors is free cash flow. Viatris reported Q1 free cash flow of $1.1 billion, up 34% year over year. That's more than enough to cover its quarterly dividend payments of around $150 million. Plus, Viatris announced earlier this year that it would be selling its biosimilars portfolio for more than $3.3 billion to add more financial flexibility. Amassing more cash is great news to income investors' ears.

The company has already raised its dividend by $0.01 this year to $0.12. While that increase may seem nominal, it amounts to a 9.1% bump. Investors who buy the stock today will be earning a yield of around 4%. With Viatris' strong cash flow, there could certainly be more rate hikes in the future.

Now could be an opportune time to buy the stock. Viatris currently trades at a forward price-to-earnings multiple of less than four. That's incredibly cheap given that the average healthcare stock in the Health Care Select Sector SPDR Fund trades at 16 times its future profits. If you love dividends, I think that Viatris is a stock you should consider adding to your portfolio today.