When the company's Q2 report arrives, investors should focus on its sales of 3D printers and print materials.

Stratasys (SSYS -1.21%) is slated to report its second-quarter results before the market opens on Aug. 3. At this point, it appears that the 3D printing company's report will precede that of rival 3D Systems, which hasn't yet announced a date for its next earnings release.

Investors will probably be approaching Stratasys' upcoming report with somewhat equal doses of optimism and caution. On the positive side, the company has made good progress in improving its results following the earlier stages of the pandemic, which significantly hurt its sales to the industrial sector. Moreover, last quarter, it easily beat analysts' consensus estimates for both revenue and earnings. That pleased investors enough to send its shares up by 11.6%.

However, warning signs that the U.S. economy could slide into a recession this year or next year have been intensifying. So investors are probably concerned about the effects the challenging macroeconomic environment could have on Stratasys' results over the short and medium terms. That's why the company's guidance should be even more important than usual this time.

Additionally, some investors are probably concerned that Ark Invest CEO Cathie Wood dumped Stratasys stock from her exchange-traded funds (ETFs) in a major way in early July. Granted, Wood's hand has been ice-cold lately, but she whipped other fund managers during the earlier stages of the pandemic and remains worth following.

On July 5, Wood's Ark Innovation ETF sold 1.8 million shares of Stratasys. As of July 14, it holds fewer than 124,000 shares of Stratasys, which account for only about 0.02% of the fund's value. Not surprisingly, Stratasys stock plunged on July 6 after Ark's huge sale was revealed, losing 14.8% of its value.

With this background in mind, here's what investors should be watching for in Stratasys' Q2 report. 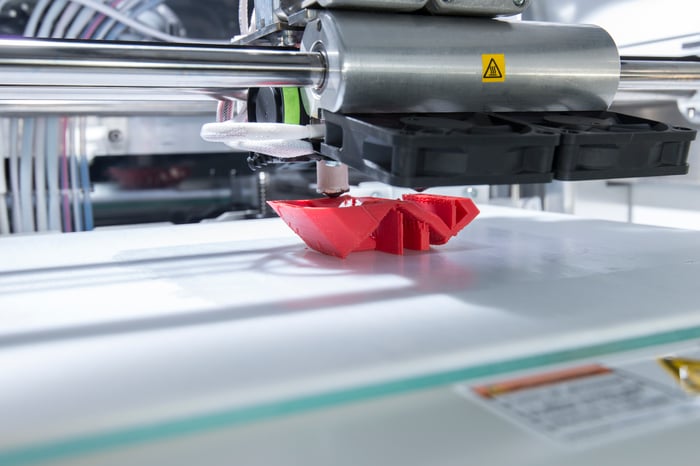 Below are Wall Street's consensus estimates for the recently completed quarter and the company's results from the prior-year period.

For Q2, Stratasys guided for year-over-year revenue growth by a percentage in the low-to-mid teens. Management did not provide guidance regarding the quarter's earnings.

For context, in the first quarter, Stratasys' revenue increased 22% year over year to $163.4 million, surpassing the $157.6 million Wall Street had expected and beating the company's guidance for a growth percentage in the high teens. That growth was driven by the company's products segment, where sales jumped 25%; its services segment's sales rose by just 15%. Within the products business, 3D printer revenue surged by 37% and print materials revenue grew by 16%. It was the company's best first quarter in terms of 3D printer sales in six years. This bodes well for its future sales of print materials because sales of machines drive sales of materials, which sport high margins.

Any notable change in the company's 2022 guidance will probably move the stock.