Please ensure Javascript is enabled for purposes of website accessibility
Log In Help Join The Motley Fool
Free Article Join Over 1 Million Premium Members And Get More In-Depth Stock Guidance and Research
By Jamie Louko – Sep 28, 2022 at 10:00AM

Figs is committed to keeping its prices stable despite rising transportation costs and increasing inflation.

With inflation pressuring business budgets, most consumer-goods companies have started increasing prices and passing higher costs on to consumers. This would help alleviate cost pressure to keep a company's profitability high. On the flip side, consumers get the brunt of these rising costs.

But Figs (FIGS 9.46%) isn't doing this. Instead, it's keeping its prices stable during this inflationary time. The scrubs manufacturer hasn't lost its pricing power; instead, it is looking to stay on the good side of its loyal customer base. Is this a smart move, or could it lead to frustrated shareholders? 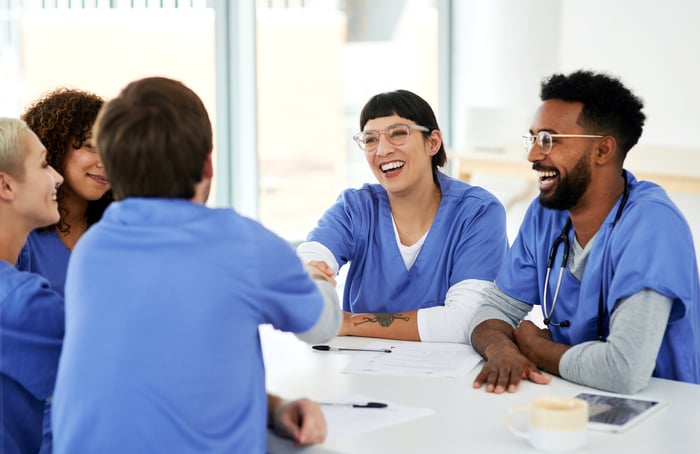 This is a good move by Figs

Figs' primary edge is its brand name. Not only are its scrubs and other apparel for healthcare workers higher quality than traditional scrubs, but it is also known as one of the most popular brands. These attributes have attracted a loyal following of over 2 million active customers, many of whom are repeat customers. Figs relies on this group heavily, with 70% of its revenue coming from repeat buyers. Therefore, maintaining its existing customer base is crucial.

Keeping its customers happy by leaving prices stable is a smart move to retain existing customers. If Figs raised prices, the company would likely see higher churn, and its most-devoted customers might become less loyal.

One of the main concerns with Figs has been that its scrubs sell for a premium compared to off-brand names. With its apparel so expensive, it could be easier to trade down to a cheaper version in a recession. While the company didn't see this in the second quarter -- revenue for the period still soared 21% year over year -- it is undoubtedly a risk.

However, this danger is being mitigated. Figs has kept its prices stable during this inflationary time, while rivals have increased prices to offset higher costs. This makes Figs' scrubs more affordable versus competitors, partly easing the worries over their premium pricing.

What to expect out of Figs for the next 12 months

While this stabilization of prices looks like a smart long-term move to keep customers happy, it will affect the short-term gross margin. Figs has historically maintained a gross margin above 70%, but this could fall into the high 60% range.

This pressure isn't a significant concern, given how high the company's gross margin is already. Having a 70% gross margin is outstanding for an apparel company, and even the best companies haven't been able to achieve this. Nike, for example, has a gross margin of only around 45%, and Lululemon Athletica maintains a margin of roughly 57%. Therefore, Figs can afford to drop a few percentage points without suffering too much.

Investors should also anticipate higher shipping costs to affect the company's gross margin. Figs has been transitioning from ocean-freight transportation to air freight to combat supply chain backlogs and unpredictable delivery times. Air freight will deliver products faster and more reliably, but it will be more expensive than ocean freight.

These higher expenses shouldn't take a major toll on the bottom line. While it will hurt profitability slightly, Figs still forecasts an adjusted EBITDA margin of 17% for the full year. Additionally, the company has started this shift already, yet it has generated positive free cash flow over the trailing 12 months.

It could be the right time to buy

Because short-term margin and profitability pressure is anticipated, Wall Street could sell off shares on this news over the next 12 months. For long-term investors, however, that might be a good buying opportunity. Shares are already cheap at 3.6 times sales, which is far lower than Lululemon and in line with Nike, despite having a much longer growth runway. If Wall Street sells off more shares, this could provide an opportunity to buy them at an appealing valuation.

Long-term investors should see this as a smart move by Figs' management. It shows investors that the company knows its business well. Figs relies heavily on its brand image and loyal following, which could be tarnished if the company hikes prices. It is making the right move by not raising prices, and while that will hurt over the next year, it could pay off immensely over the long term.

Down 75%, This Former Highflier Looks Like a Good Long-Term Buy
351%