Nvidia positioned itself as a leader in this small but rapidly growing industry.

On Nov. 16, Nvidia (NVDA 0.83%) reported its financial results for the third quarter of fiscal 2023 (ended Oct. 30). The report revealed a slowdown in overall revenue. The company is a leading producer of advanced semiconductors, and it has been generating red-hot growth over the last two years, so its recent results dealt a reality check to investors.

But it's not all bad news. Nvidia's largest segment is the data center, and it's still expanding at a strong pace, though nowhere near as quickly as its much smaller automotive segment.

Nvidia is becoming a leader in autonomous self-driving vehicle hardware and software, and some of the world's largest car manufacturers have signed on to use it. Here's why this emerging segment could supercharge Nvidia's growth for the rest of this decade.

For several years leading up to and including fiscal 2022 (ended Jan. 30), gaming was Nvidia's largest driver of revenue by a long shot. The pandemic accelerated that trend because of social restrictions and lockdowns, which triggered a consumer frenzy for Nvidia's latest-and-greatest graphics chips.

But that tailwind disappeared during fiscal 2023, and the company's gaming business crashed back down to Earth -- it saw a revenue decline of 51% in the recent third quarter alone on a year-over-year basis.

Nvidia's data center segment is now in charge of the company's destiny, bringing in the most revenue and delivering robust growth even during difficult economic times. Businesses are clamoring to leverage the power of their information, and Nvidia's advanced artificial intelligence chips are helping them draw unique insights from that data, which can help to boost sales and reduce costs.

But there's another business unit at Nvidia that receives less attention because it currently generates very little revenue compared to gaming and the data center, although it grew at a blistering pace in Q3.

In the third quarter, revenue in Nvidia's automotive segment grew by a whopping 86% year over year. The absolute number was relatively small at $251 million, making up just 4.2% of the company's total revenue for the quarter, but if it continues to grow at that pace, it will likely become a more influential piece in the very near future. 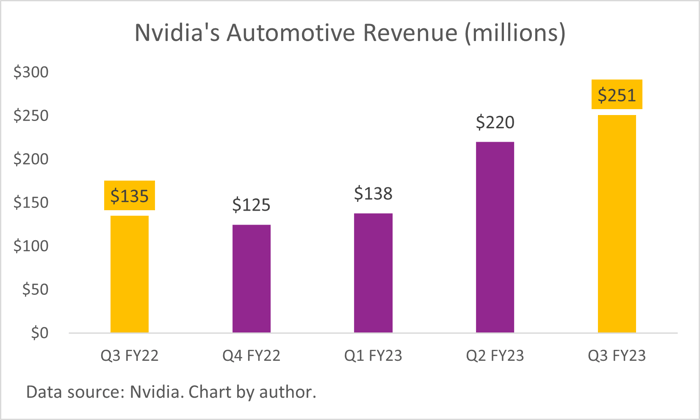 Nvidia signed deals with 35 of the world's largest car manufacturers. These companies want to implement self-driving capabilities into their vehicles by using Nvidia's Drive platform. As one example, electric vehicle maker Nio (NIO -4.99%) uses Drive in its Adam supercomputer, which powers all of its cars and is capable of performing a mind-blowing 1,000 trillion operations per second.

It allows the vehicle to run autonomously in urban areas and on expressways, and it can even self-park.

Based on disclosures Nvidia made in prior quarters, we know it has built up a sales pipeline of at least $11 billion which will vest over the next six years. But the company continues to win new customers and deepen its ties with existing ones. In 2024, Mercedes-Benz is expected to be one of the first large brands to have Nvidia-powered self-driving cars on the road at scale.

The financial opportunity in this space is set to explode, with one estimate by Allied Market Research suggesting it could be worth more than $2.1 trillion by 2030.

Nvidia stock is down 52%, and that's an opportunity

Nvidia stock is getting crushed under the pressures of the weakening economy and an oversupply of semiconductors as producers raced to fill shortages left in the wake of the pandemic. But neither of those challenges is likely to last long-term.

In fact, peak inflation in the U.S. might already be behind us, which could bolster consumer spending into the new calendar year. If that reignites Nvidia's gaming segment, the company could be set for a strong return to growth.

In any case, Nvidia continues to innovate in that segment with its GeForce Now cloud-based gaming platform. It enables its 20 million users to effectively stream over 1,400 games online, so they don't have to worry about downloading updates or patches.

With Nvidia's data center segment going strong, its automotive business soaring, and the gaming industry set for a potential recovery next year, Nvidia stock might be a great buy here while it's down 52% from its all-time high.