Please ensure Javascript is enabled for purposes of website accessibility
Log In Help Join The Motley Fool
Free Article Join Over 1 Million Premium Members And Get More In-Depth Stock Guidance and Research
By Howard Smith - May 12, 2021 at 12:23PM

The first large-scale offshore wind project in the United States has gotten the green light from government officials. The U.S. Department of the Interior (DOI) announced yesterday that the Vineyard Wind 1 project set to be constructed off the coast of Massachusetts will create 3,600 jobs and provide enough power for 400,000 homes and businesses.

Approval was for up to 84 turbines about 12 nautical miles offshore from Martha's Vineyard and Nantucket. But according to the Vineyard Wind team, the facility will use the General Electric (GE -1.63%) Renewable Energy segment's large Haliade-X turbines, which will allow it to use only 62 turbines. 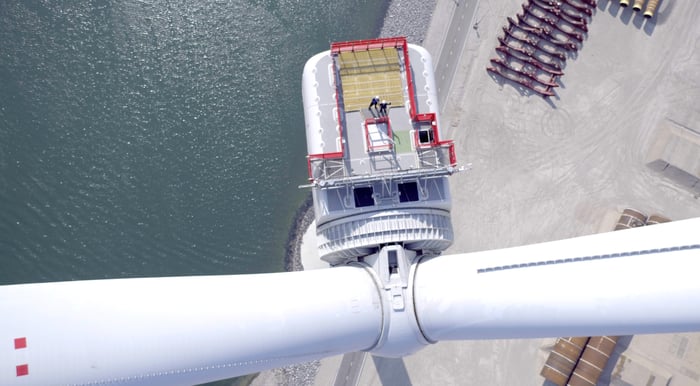 The project is another win for GE's renewable energy group. In its first-quarter 2021 earnings release, GE said the renewably energy segment grew orders 15% year over year, though revenue was up only slightly at 2%. Just yesterday, GE separately announced a strategic agreement with Toshiba Energy Systems and Solutions -- a former unit of Toshiba (TOSBF -0.60%) -- to support the growing Japanese offshore wind market. GE will provide the Haliade-X technology to help Toshiba with local manufacturing for offshore wind projects.

The Vineyard Wind project is notable as the first large project approved to help attain the administration's goal of creating 30 gigawatts (GW) of U.S. offshore wind capacity by 2030. Europe has taken the lead in offshore wind power generation, with 2.9 GW installed just in 2020, according to CNBC.