Obamacare has affected many companies throughout the health-care industry, but medical-device makers have taken a particularly large hit. That's because the law imposed a 2.3% excise tax on sales of medical devices, hitting both profitable and unprofitable companies alike. Yet even though it's subject to the tax, Medtronic (NYSE:MDT) has managed to overcome Obamacare's headwinds as the stock has climbed to levels not seen since before the financial crisis. The simple reason: a dividend history that demonstrates Medtronic's ability to weather similar storms in the past without harming investors in the process.

Medtronic is a member of the elite Dividend Aristocrats list, where you'll only find companies that have managed to increase their payouts to investors annually for at least 25 years. That's a tall order for most companies, and only a few dozen stocks qualify to be Dividend Aristocrats. Let's take a closer look at Medtronic to see whether it can continue to keep its dividends rising despite the Obamacare tax.

How Medtronic has kept its dividend strong

Medtronic's stock has rewarded investors both through lucrative dividends and with share-price appreciation. Combining the two yields a 30% total return for Medtronic so far in 2013, with the stock having held up well even during the overall market's weakness over the past couple of months.

Medtronic's latest quarterly earnings report shows just how well the company has managed to do even in a tough environment for the industry. Medtronic reported cardiac sales that were up 4% year-over-year, and even though that might seem weak, it's much better than its peers have done recently. Boston Scientific (NYSE:BSX) saw sales in its cardiac rhythm unit drop 5%, with international pricing pressure weighing on its ability to grow revenue. St. Jude Medical (NYSE:STJ) reported an even bigger drop of 8% in its cardiac rhythm sales, with pacemaker-related revenue falling 12%. Medtronic has also done a good job of taking advantage of international markets, with sales abroad rising 7% and representing half of its overall revenue. That success is particularly striking given that both St. Jude and Boston Scientific have seen declines in their international sales.

But Medtronic hasn't seen everything go right. Back in May, the company said it planned to cut 230 jobs in its spinal business, which has been experiencing falling sales due to factors like Europe's economic weakness and rising competition. Spine-rival Stryker (NYSE:SYK) also saw a 4% drop in segment sales last year, and it has also responded to adverse conditions in the industry by laying off employees. Stryker also specifically cited the Obamacare tax as a primary reason for its cost-cutting measures.

Still, Medtronic hasn't stopped innovating. Partnering with Bayer, Medtronic has helped type-1 diabetes sufferers by working to link up its insulin pumps to Bayer's glucose-monitoring devices, ensuring proper dosages without chance for human error. At the end of May, Medtronic won FDA approval for its Endurant II Aorto-Uni-Iliac Stent Graft System, which helps treat potentially fatal abdominal aortic aneurysms. Advances like these are just examples of Medtronic's expertise in the space in tackling new medical problems. 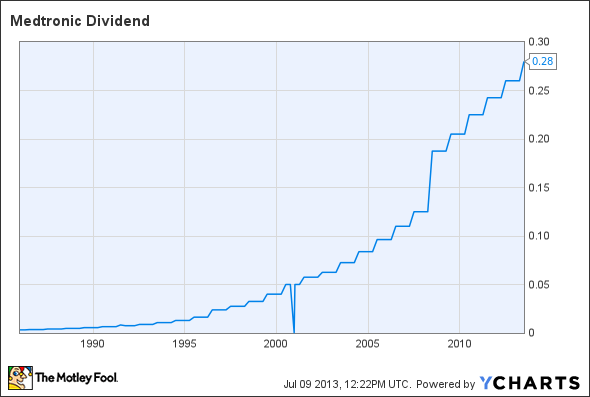 When will Medtronic raise its dividends again?
Medtronic just raised its dividend, so don't expect another jump until mid-2014. But as long as Medtronic can keep its business strong by using international growth to offset the negative impact of higher taxes, the stock should keep delivering the goods for dividend investors.

Click here to add Medtronic to My Watchlist, which can find all of our Foolish analysis on it and all your other stocks.