Numerous studies show that high-yielding dividend growth stocks generate the best long-term total returns. For example, between 1972 and 2004 dividend growth companies in the S&P 500 outperformed their non-dividend peers by an average of 122% annually.

Note: MLPs pay distributions, not dividends. Distributions are tax differed and require a K-1 form instead of a 1099 form. They can cause tax headaches when held in tax deferred accounts such as IRAs. 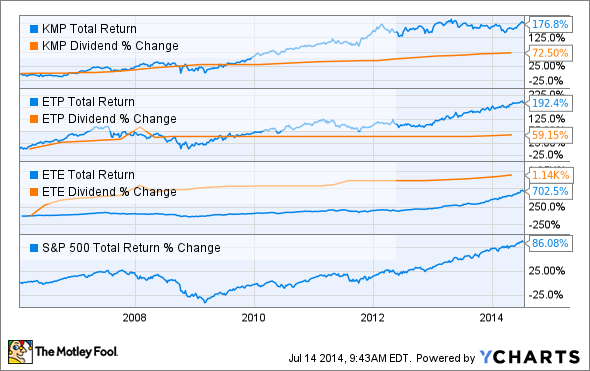 Each of these five companies/MLPs is set to continue its winning streak, fueled by America's historic energy boom, which is estimated to require $890 billion in investment through 2026. This is projected to create as many as 1.1 million jobs and singlehandedly raise America's GDP growth rate by as much as .75% per year.

Meanwhile, NGL production is expected to soar 60% by 2020 to over 1 million bpd.

This will provide cheaper feedstocks for the petrochemical industry, which is investing $176 billion to build, overhaul, and construct infrastructure for 148 chemical facilities along the Gulf Coast.

LNG exports are a major way America will deal with the excess gas produced by our estimated 56% increase in gas production through 2040.

Recently Energy Transfer Partners announced plans to construct a 400-mile NGL pipeline connecting the Marcellus/Utica shale, whose production is expected to increase 34-fold from 2007-2035, to its Panhandle Eastern pipeline. The 2.2 bcf/d project will be expandable to 3.25 bcf/d and has already received large, firm commitments from three major gas shippers, who are willing to take equity stakes to fund the project.
On the LNG export front, Energy Transfer Partners is partnering with Energy Transfer Equity to construct the $9 billion Trunkline LNG export facility in Lake Charles, Louisiana. The facility is set to open in 2019 and export 15 million metric tons/year. To finance the project Energy Transfer Partners will launch a new MLP, retaining 100% of general partner and incentive distribution rights (IDRs).
Kinder Morgan: best growth lies ahead
Kinder Morgan, in addition to the three energy trends reported above, has two more major trends into which to invest $30.4 billion over the next few years. These are: growing gas exports to Mexico and exports of ultra-sweet crude oil (condensates). Since just December of 2013 Kinder Morgan has signed an additional 2.8 bcf/d of gas volumes, representing a 8.5% increase in systemwide volume, to come online by 2017. This expansion only represents $1.5 billion in investments for Kinder Morgan, illustrating just how massive Kinder's growth runway is.
Kinder Morgan's single largest asset is the El Paso Natural Gas (EPNG) system, consisting of 10,141 miles of pipelines connecting California to gas fields in the San Juan, Permian, and Anadarko basins. Kinder Morgan recently signed a 25-year agreement to connect and expand the EPNG and Sierrita gas pipeline system to export gas to northern Mexico.
Kinder Morgan's LNG efforts include an expansion of its Elba Island facility, which will receive an additional 8.4 bcf of storage capacity and 0.9 bcf/d of export capacity. Kinder Morgan is also building the Elba Express pipeline which will transport 1.2 bcf/d of gas to supply the terminal's growth.
Finally, Kinder Morgan is set to cash in on the commerce departments recent permit approval for ultra-sweet crude oil exports (in the form of minimally refined condensates) by partnering with Magellan Midstream Partners on the Double Eagle condensate pipeline.
The 100,000 bpd pipeline will connect the Eagle Ford shale, whose booming production is 27% condensate to export facilities in Corpus Christi, Texas. Kinder Morgan is hoping to expand its crude and condensate pipeline system to 250,000 bpd by 2016.
Foolish Takeaway
Energy Transfer Equity, Energy Transfer Partners, Kinder Morgan Energy Partners, Kinder Morgan Inc, and Kinder Morgan Management all represents high-quality, high income, dividend/distribution growth investments to take advantage of America's record smashing energy bonanza. All five are likely to outperform the market in terms of total returns for at least the next decade but probably much longer.