The tech giant's diluted earnings per share fell 13% year over year to $0.54, while revenue rose 25% to $23.2 billion. Analysts polled by Thomson Reuters had expected earnings of $0.49 on revenue of $22.02 billion. Gross profit rose 12% to $14.93 billion, while operating income slid 8% to $5.84 billion. Revenue at Microsoft's Consumer and Devices business (Windows Phone, Xbox, Surface, and consumer licensed software) rose 47% to $10.96 billion, while Commercial revenue (commercial licensing of its software and services) rose 10% to $12.28 billion. 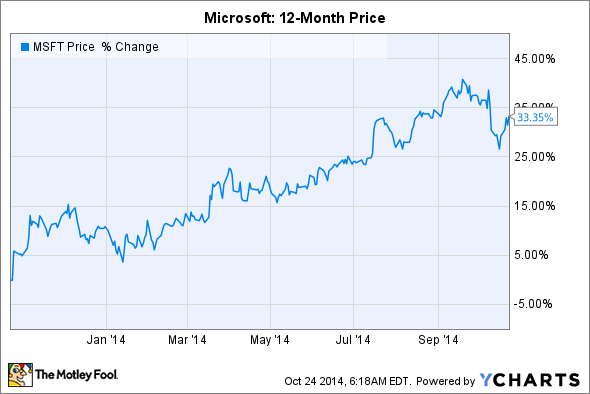 Microsoft stock, which has already rallied more than 33% over the past 12 months, climbed more than 3% in after-hours trading following the earnings report. Let's take a look at the three key takeaways from the company's earnings that investors need to know.

Hardware sales are actually improving
Many Microsoft investors aren't fans of its hardware business -- which consists of its Xbox consoles, Windows Phones, and Surface tablets. Each of these product lines is overshadowed by much more popular products.

Sony (NYSE:SNE) has sold around twice as many PS4s as Microsoft's Xbox Ones since last November. Windows Phones only account for 2.5% of all smartphones worldwide, compared to 85% for Google (NASDAQ:GOOG) (NASDAQ:GOOGL) Android and nearly 12% for Apple's (NASDAQ:AAPL) iOS, according to IDC. Microsoft has also lost at least $1.7 billion on the Surface line since October 2012, which continues to be overshadowed by the iPad, Android tablets, and cheaper convertible Windows devices.

Therefore, it was surprising when sales of all three product lines rose. Total Xbox console sales (Microsoft doesn't report Xbox 360/Xbox One figures separately) rose 102% year over year to 2.4 million units. Sales of Lumia phones rose 5.7% year over year to 9.3 million units, which translated to $2.61 billion in revenue at the Windows Phone division. Meanwhile, the launch of the Surface Pro 3 helped revenue from the Surface line to more than double sequentially to $908 million.

Office 365, Windows, and the cloud
Microsoft reported that Office 365 Home and Personal subscribers rose 25% sequentially to 7 million. Revenue at Office Commercial products and services also rose 5% as enterprise customers transitioned to Office 365. This indicates that Microsoft's plan to shift Office toward a software as a service (SaaS) model is working, and that fears of Google's cloud-based offerings killing Office could be overblown.

All of Microsoft's new products tie back to the cloud, which is intended to tether mobile and desktop users to the same ecosystem. Microsoft reported that commercial cloud revenue rose 128% year over year, thanks to the strength of Office 365, Azure, and Dynamics CRM, although it didn't provide exact revenue figures.

Watch the bottom line
Despite the decent top line growth across Microsoft's business segments, its net income fell 13% year over year to $4.54 billion. That was due to increased cost of revenue and operating expenses across the board:

Investors should remember that Microsoft offered steep discounts on its hardware and software throughout the quarter.

The Xbox One, which originally cost $499 with the Kinect and a controller, now costs $399 without the Kinect. Microsoft is targeting low-end markets with cheap Windows Phones like the Lumia 530, which only costs around $115. It slashed the prices of all three Surface 2 models by $100 back in August. It also offered free Windows licenses for devices under 9 inches, launched the cheaper Windows 8.1 with Bing for OEM partners, and bundled free memberships for Office 365 and One Drive with new devices. All of those strategies were clearly aimed at gaining market share at the expense of margins.

The good news is that $1.14 billion of its operating expenses came from the integration of its new business units and restructuring costs. Those expenses, which affected its earnings by $0.11 per share, should eventually decline after all the new pieces fall in place.

A company in transition
During Microsoft's postearnings conference call, CFO Amy Hood offered lower-than-expected revenue guidance for its consumer licensing, phone, and gaming businesses. The company also expects to incur an additional $500 million in restructuring expenses over the remainder of the fiscal year.

While those projections suggest that Microsoft's transition will be a bit rocky and continue over the next few quarters, its vision for the future certainly looks a lot sharper than it did in the past.