Perhaps the best place to look for such investments is the elite group of companies known as the Dividend Aristocrats. These companies are S&P 500 constituents that have been paying a dividend for at least 25 consecutive years. In a bid to help investors figure out which dividend-paying companies might be worth stashing away in their portfolios, we asked three Motley Fool experts which Dividend Aristocrats are on their wish lists.

Selena Maranjian
I'm cheating a little, because the Dividend Aristocrat I'm highlighting today is one I already own: Johnson & Johnson (NYSE:JNJ). If I didn't already own it, I'd want to, though. It recently yielded a solid 2.8%, and better still, it has been raising its payout by an annual average of 9% over the past decade (though its increases have been smaller in recent years).

There are a lot of reasons you might want to own this company. First, it's well-diversified: Its businesses comprise the world's largest medical-devices and diagnostics company; the sixth-largest consumer health company; the sixth-largest biologics company; and the eighth-largest pharmaceuticals company. Its consumer-facing business segment brings stability because its produces brand-name items that people buy no matter the state of the economy, Band-Aids, Tylenol, Splenda, and Visine. Its pharmaceutical division is less steady because not all treatments reach blockbuster status, and those that do eventually lose patent protection. Still, its healthy pipeline, which includes many formulas in phase 3 trials, bodes well for its future. Its track record is strong, too: From 2009 through 2014, it introduced 14 new products that generated $27.5 billion in cumulative sales. Companywide, about a quarter of Johnson & Johnson's revenue comes from products introduced in the past five years, which demonstrates effective innovation. It treats shareholders well, too, returning about 70% of free cash flow to them.

The only reason I might not rush to buy the stock now is that it's not quite at bargain levels. Its price-to-sales and price-to-cash-flow ratios are a bit above their five-year averages, though its current and forward-looking P/E ratios are looking slightly low on a historical basis. For long-term investors, it's still likely to be a solid performer, offering plenty of income over time.

Matt Frankel
One Dividend Aristocrat I'm seriously considering is Wal-Mart (NYSE:WMT), because it's one of the best defensive plays I know of, and I think there's a good chance that a market correction will occur soon.

Wal-Mart pays a modest 2.2% dividend yield, but it has a solid 40-year history of consecutive annual dividend increases. And given its payout ratio of about 40%, there's plenty of room for future increases, as well as a margin of safety.

Wal-Mart makes a great defensive play because its business model shines in tough economic times. The company sells things that people need (groceries, clothing, and so on), it has a loyal customer base, and, because of its size, it can undercut virtually any other retailer's prices and still earn a profit.

Plus, unlike most other retailers, the company enjoys a growing customer base when times get tough. Consumers who generally shop at higher-end retailers may need to tighten their belts in tougher times and shop where the bargains are. Just look at Wal-Mart's performance during the 2008 crash versus other retailers and the market as a whole: 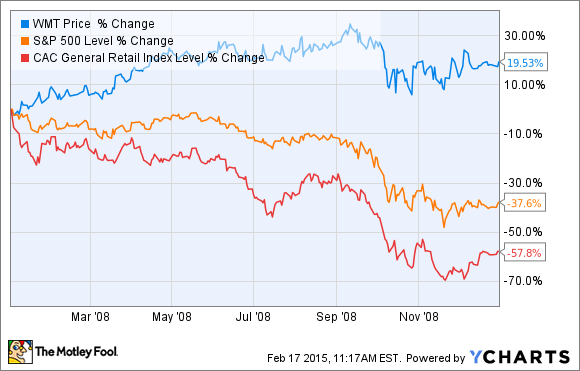 While most of the market was crashing, Wal-Mart gained nearly 20% for the year. I'm considering Wal-Mart for my own portfolio in 2015, and if you're worried about the potential of a correction, maybe you should, too.

Dan Dzombak
One Dividend Aristocrat I'd be interested in owning is VF Corp. (NYSE:VFC).

You probably know VF through some of the apparel brands it owns, including Vans, The North Face, Wrangler jeans, and Timberland, among many others. 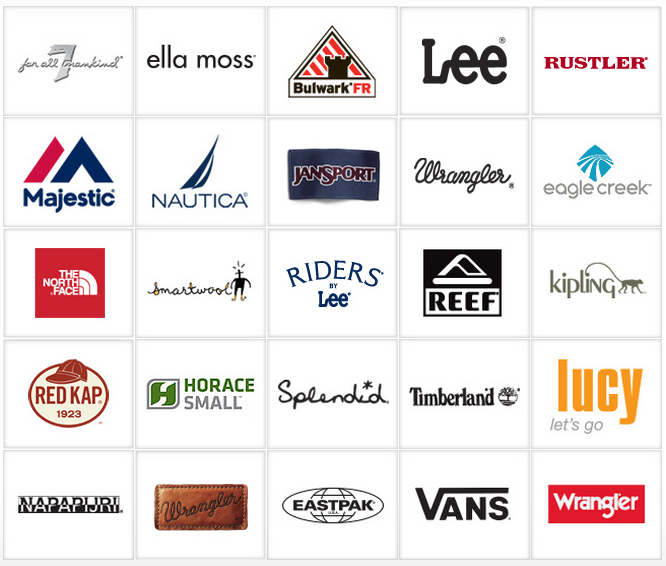 But now the company has started opening up VF branded stores, offering its many brands under one roof. By going directly to consumers, rather than through department stores and other retailers, the company has the opportunity to earn higher margins than it could otherwise.

With the cash flow generated from its strong brands, the company reinvests in its brands, purchases new brands, and pays a dividend. In fact, it has now increased its dividend annually for the past 42 years. There's still a lot of room for growing that dividend, too, as the company's payout ratio is just 40%.

The stock yields only 1.7% and isn't particularly cheap at 32 times earnings. But the company trades at such a high price because it has such strong brands, which have helped it grow at a 14.5% pace over the past five years, and it's expected to keep growing by 11% over the next five years. While the shares are a bit expensive for me right now, if you're looking for a strong company that promises dividend growth for years to come, this is one to keep your eye on.