From 2001 to 2012, gold enjoyed 12 straight years of consecutive rising prices, and many investors hoped that the yellow metal would be able to sustain its bull market well into the future. Yet 2013's $475 per ounce plunge in gold prices dashed those hopes, and this year's failure for gold to regain any of that lost ground suggests that investors could have to wait a long time before prices start moving upward again. Looking at how the price of gold in 2014 moved shows the crosscurrents that plagued investors throughout the year, as bouts of optimism gave way to the harsh realities of the mining industry and the supply and demand picture for gold. 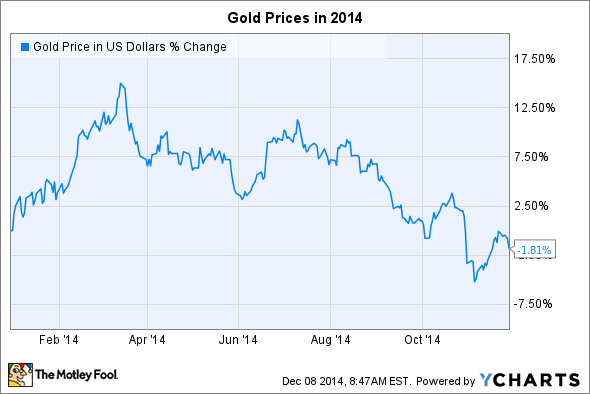 What moved the price of gold in 2014?
Despite the modest 2% decline in gold prices for the year, 2014 has actually been a topsy-turvy time for the price of gold. At the beginning of the year, gold prices soared, rising from around $1,200 per ounce to almost $1,400 as investors looked for ways to protect themselves from rising geopolitical tensions. In particular, the crisis in Ukraine which led to the annexation of Crimea in March heightened the potential for conflict between Russia and the West, and the threat of economic sanctions had many investors looking to gold and its traditional safe-haven status for shelter from possible turbulence in the stock market and other investments. Later in the year, new trouble in Iraq and continuing conflict in Gaza also added to the list of reasons gold investors used to justify price gains.

Yet on the macroeconomic front, conditions conspired to keep gold's gains in check and eventually led to their disappearance. With the Federal Reserve having gradually removed its stimulus by reducing its quantitative easing activity throughout 2014, the downward pressure on interest rates that the Fed had provided gradually diminished, and the potential for higher rates takes away one of the supports for gold prices by making it more costly to finance gold purchases. Even though interest rates haven't actually moved much yet, investors saw in 2013 how even the future likelihood of a rate increase can be enough to shake market confidence.

A strong dollar keeps gold in check
The other major issue that gold investors had to deal with was the soaring value of the U.S. dollar compared to other major foreign currencies. The Japanese yen continued its descent after the government continued to take further measures to try to stimulate the island nation's economy with measures to expand its monetary base in a desperate move to fight deflationary pressures. At the same time, the European economy remained weak, with fears that economies in many of the Eurozone's member nations will remain in recessionary conditions in the near future. 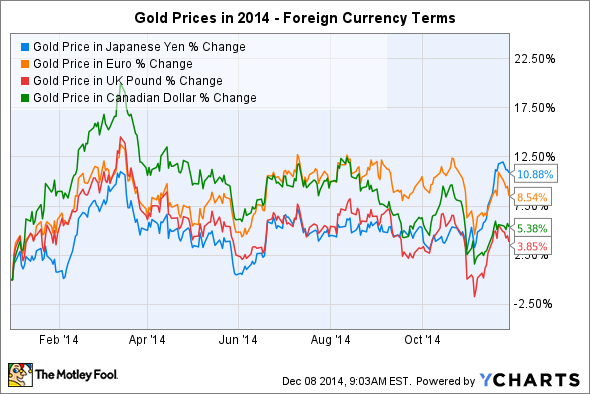 By contrast, the U.S. economy has been making solid gains, and that has driven foreign-exchange traders to prefer the dollar over less promising currencies. That in turn puts pressure on the price of gold in dollar terms, even though gold actually scored gains when you value it in yen, euro, or most other currencies around the world.

Yet the lack of a rebound in the price of gold in 2014 has made many investors reluctant to own the metal, and that in turn has weakened overall demand for bullion. The popular gold ETF SPDR Gold Shares (NYSEMKT:GLD) kept seeing declines in investor interest, with its total reserves falling another 10% in 2014 to just 23.2 million ounces. Even though that puts the total asset value of the ETF at $27.7 billion, that's down from the whopping $77.5 billion in holdings that bullish investors had in the ETF just three years ago.

What's ahead for gold?
Looking to 2015, the tug of war for gold prices could persist as economic and geopolitical factors continue to pull gold back and forth. With many analysts expecting the Fed to start moving forward with rate increases as early as the middle of 2015, even relative bargains in the gold market recently might not be enough to entice new investors into the gold market. Until investment demand picks up, it'll be tough for the price of gold to recover from its stagnant 2014.

Price of Gold in 2014: Why It's Gone Nowhere @themotleyfool #stocks $GLD Next Article
Current