How well you've done since 1970 all comes down to sex.

No, this isn't another of Warren Buffett's dirty metaphors. This is about real income and gender.

The single best measure of how people are doing financially over time is real income -- wages adjusted for inflation. It shows a country's quality of life -- how much stuff the average person can buy with an average wage.

Here's how we've done over the past 40 years: 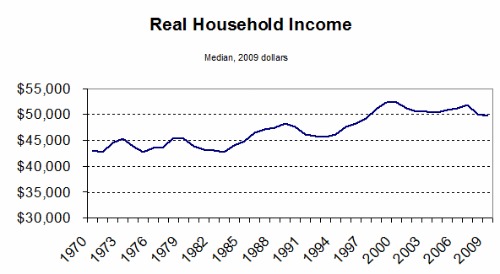 Average real household income has increased 16% since 1970. However meager and pitiful this is, the average American household's still earning more today than it did four decades ago.

But who's responsible for those gains? An interesting thing happens when you break out income by sex: 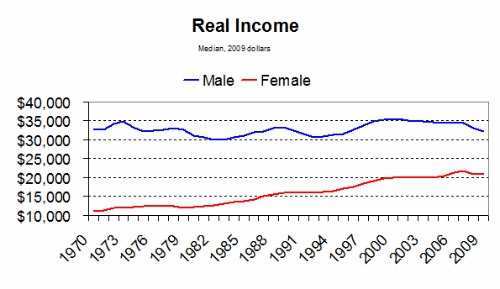 If household income has increased slightly, and male wages have declined, there's only one logical conclusion: The household increase has stemmed entirely from women's wages. Men are actually dragging down the average. (We find a way to mess up most things, I'm told.)

First, note that average male wages are still much higher than females'. Some of this is explained by the number of hours worked. A male and female can earn a similar hourly wage, but the female might underearn the male if she works less because of, say, maternity leave.

But males still earn more than females on average, all else equal. Some of this probably owes to discrimination, unfortunately. But there's another factor here that could explain why the gap between male and female wages is closing.

Think about the type of jobs that dominated the economy 40 years ago. They were factory jobs -- auto workers at Ford and GM , steel mill workers, construction workers, what have you. There were almost twice as many manufacturing jobs in 1970 as there are today -- or about threefold more, when adjusted for population growth. These were physically demanding jobs, so much so that males held an advantage over women.

Today's jobs aren't like that. The growing jobs can be found in IT, engineering, computer science, and health care -- fields where physical ability makes no difference at all. Women's wages might be rising today simply because they're catching up with men's wages as job opportunities flatten out.

Another reason women are fueling average household wages: More of them are working. Women made up 38% of the workforce in 1970. In 2008, they represented 47%.

Whatever the reason, these are the important facts: Average real household income is rising only because women's wages are rising. And women's wages are rising not because they're booming, but because they're closing the gap with men's. The real household earnings stupor over the past forty years is awful on the surface, and even uglier in the details.

Now pardon me while I find something else to mess up.