Shares of Apple hit a 52-week high today. Let's look at how it got here and whether clear skies are ahead.

How it got here
A handful of catalysts have let the Mac maker enjoy a monster rally over the past quarter. Shares have gained a whopping 48% over the past three months alone.

For starters, Apple posted a blowout first quarter in January, selling 37 million iPhones and 15.4 million iPads in the process. The incredible figures had various Street analysts cranking up price targets to catch up with Cupertino, including Morgan Stanley's Katy Huberty with a bull case price target of $960, Topeka Capital Markets' Brian White with $1,001, and Piper Jaffray's Gene Munster with $910.

Apple then proceeded to unveil its third-generation iPad, which was launched almost immediately. The upgraded device's main selling point is a high-resolution Retina Display. Some critics called the improvements relatively incremental, but that didn't stop Apple from selling 3 million units over its launch weekend.

Then Apple did the unthinkable: It announced the initiation of a regular dividend. The $2.65 quarterly dividend will kick off in the fourth quarter of fiscal 2012 and represents an approximately 1.7% yield at current prices. The move should broaden Apple's investor base to include income-oriented investors, as if the 579% capital appreciation over the past five years wasn't enough.

How it stacks up
Let's see how Apple stacks up with some of its peers. 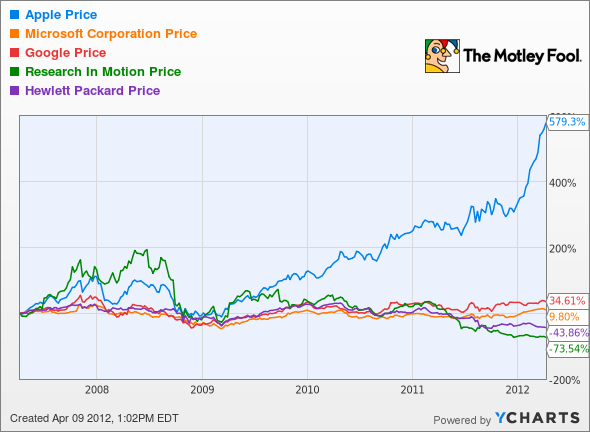 That chart shows that while Apple was already enjoying healthy momentum, it has markedly accelerated year-to-date. Let's compare some other fundamental metrics also.

These digits add some additional context. Apple's EPS growth leaves rivals in the dust, while boasting higher ROE -- all for a reasonable valuation.

What's next
Can Apple reach a trillion-dollar market cap? I think so. Apple's momentum seems unstoppable at this point and continues to accelerate. Some Fools think it's possible that Apple will fall one day down the road, but I don't see that happening anytime soon.

Cupertino has built an admirable moat that's nearly inescapable for consumers. I can't tell you exactly when, but I firmly believe Apple will be the world's first trillion-dollar company.

Interested in more info on Apple? Add it to your Watchlist.