Shares of Las Vegas Sands hit a 52-week high yesterday. Let's look at how it got here and whether clear skies are ahead.

How it got here
There are two catalysts that have driven Las Vegas Sands over the past year: Marina Bay Sands in Singapore and Sands Cotai Central in Macau. The first is one of just two resorts in Singapore, and which is now running on all cylinders. During 2011 it generated $1.5 billion in EBITDA, nearly as much as the rest of the company's resorts combined. Sands Cotai Central is Las Vegas Sands' newest resort, which began opening this week on the Cotai Strip. The development will add 5,800 rooms to Cotai when complete and will cost up to $5 billion.

Ever since a big hiccup during the financial crisis, when the company almost went under, Las Vegas Sands' fortunes have improved rapidly. Quarterly EBITDA topped $960 billion for the first time in the fourth quarter and will continue to rise as Macau and Singapore satisfy Asia's thirst for gambling. 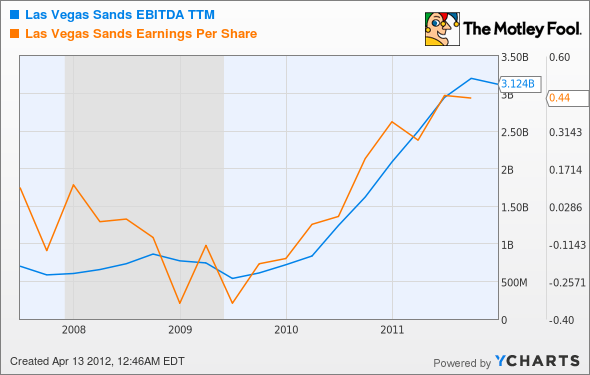 Profits at Las Vegas Sands' resorts have been strong because competition is limited in its two most important markets. Las Vegas Sands, Melco Crown , Wynn Resorts , and MGM Resorts hold four of the six gaming concessions in Macau, but Sands has made the biggest bet on the future of gaming in Asia. When compared to the operators in Macau, Las Vegas Sands squeezes more profit from its resorts and has a strong return on its assets.

The only question is a matter of valuation for Las Vegas Sands. When you include the potential $1 billion in EBITDA that Sands Cotai Central will add to the company, it trades at an enterprise value/EBITDA ratio of 11.2, on par with the competition. But with China's growth slowing, I fear that may be too high right now.

What's next?
In my opinion, all of the gaming stocks I've mentioned above are entering frothy valuation territory, especially when you consider slowing growth in Macau and China. An entry point with an enterprise value/EBITDA below 10 is much more attractive to me than where these stocks are currently trading.

With that said, Sands Cotai Central will be the last resort built in Macau until at least 2015, so any growth that does occur will be spread among existing players. This could lead the companies above to grow into their valuations. However, I would rather buy at a value allowing growth to be my upside.

The CAPS community has mixed feelings about Las Vegas Sands as well. The three-star rating it's given the company is a big thumbs-sideways, giving no direction to investors. For now, I would put Las Vegas Sands on My Watchlist, by clicking here, and be ready to jump in when value looks a little stronger.