Retail sales hit a record high last month, reaching $411 billion, which was a 24% increase from the recessionary lows of March 2009. While customers are willing to dish out the big bucks, they want added value. Be that in the form of exclusive deals, members-only sales, or limited-quantity products -- the luxury stocks that win are the same ones creating customer value.

Know thy customer
Fashion design house Michael Kors , which became publicly traded in December 2011, is proving it has what it takes to run with the big boys. The stock has soared more than 125% since its IPO last year, one of the company's strong suits being its ability to anticipate what customers want. Kors was ahead of the curve in terms of retailing accessories, which now sets it apart from rival Coach , which is better known for its luxury handbags and leather goods. 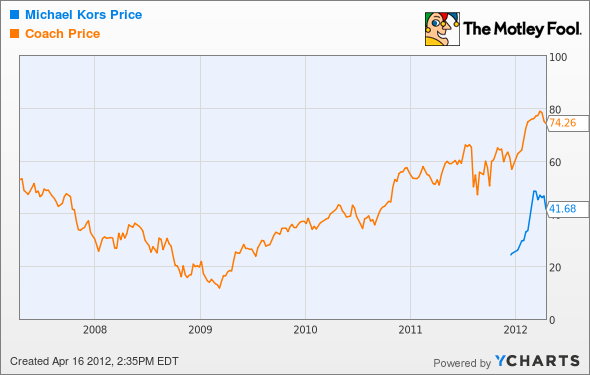 A major advantage for the namesake company is the strategic pricing of its products -- making them accessible to a wider customer base, while still allowing them to be regarded as designer goods. In addition to Kors' product line of popular chronograph watches, the company launched a line of lower-priced apparel items dubbed "Michael." Today, the Michael segment accounts for a whopping 90% of the company's overall revenue.

I'm confident that Kors will continue on this growth trajectory throughout the next three years given its strong market position. Shares are currently trading around $41 -- off their 52-week high. However, with much of that growth already reflected in the current stock price, I'd wait for a pullback before jumping in.

On the other hand
For a much more affordable luxury retail stock, let's shift our focus to True Religion . Shares of the high-end denim seller took a hit recently after the company reported weaker-than-expected earnings for its fourth quarter. But it's not all bad news. Growth in e-commerce sales spiked 32.9% in 2011, ringing in at $251 million, not to mention that same-store-sales increased 10.9% for the year. My Foolish colleague Sean Williams made the case that True Religion's weak quarter was largely the result of its ongoing transition away from the wholesale business. I strongly agree.

What should really concern shareholders is the fact that the move away from wholesale distribution and toward its own retail stores means more control over the brand, and could mean higher margins down the road. And as we know, a higher profit margin is often synonymous with a more profitable company. Austin Smith, a fellow Fool, believes True Religion is a true value play. I also agree with this. Shares trade around $25, with a P/E ratio of 14 and a debt-free balance sheet.

As it goes with designer brands, you'll have to pay a premium for a pair of True Religion jeans, which retail for $150 to $350 a pair. Luckily, you don't have to pay a premium for the stock. At 11 times future earnings, shares of True Religion look like a bargain. I think investors underestimate the brand's appeal, which is why I'm giving the stock a three-year outperform rating on my profile in Motley Fool CAPS.

Create a legacy
What Michael Kors and True Religion have in common is that they're both relatively new additions to the designer goods market. Especially when compared to an iconic name like Tiffany & Co. . Founded in New York City in 1837, Tiffany has been an icon of American culture for more than 175 years. You don't remain the premier jeweler for that long by chance.

The stock is up 7.3% so far this year, ahead of the 5.5% gain in the S&P 500. Tiffany had a solid fiscal 2011. The company boosted net sales by 18% to $3.6 billion, followed by a 19% increase in net earnings for the year. Tiffany continues to expand overseas, and a strong presence in China should fuel future growth; in fact, the company generated 54% of sales outside of the U.S. last year.

The Asian-Pacific segment produced year-over-year sales growth of 36.2% in 2011. And I expect major gains in this region to continue and propel the stock higher over the next three to five years. The stock looks attractive, with shares currently trading around $66, and a forward price-to-earnings of just 14.

A lasting impression
With luxury goods in high demand, these name-brand retailers are proving they have what it takes to outperform the broader market going forward. For a limited time you can discover three stocks the pros at The Motley Fool are buying. Click here to get this free report titled: "3 American Companies Set to Dominate the World."