Shares of Sohu.com hit a 52-week low on Tuesday. Let's look at how the company got here and whether dark clouds are ahead.

How it got here
Sohu has fallen far from its all-time high of over $109 set more than a year ago, with shares roughly 60% lower. Chinese dot-coms were all the rage a couple of years ago, and some may have gotten ahead of themselves and have subsequently fallen back down to Earth.

The past two quarters have mostly disappointed investors. The company reported its fourth-quarter results in February, and despite the better-than-expected figures, Sohu provided soft outlook and predicted a 20% drop in brand advertising revenue. Shares plunged on concerns that the company didn't have as much growth in store.

The next quarter told a similar story, again beating estimates on the current quarter while the disappointing guidance again triggered a plunge. CEO Charles Zhang said the brand advertising business saw a slot start during the period because of the early Chinese New Year holiday and softening macroeconomic conditions in China.

How it stacks up
Let's see how Sohu stacks up against some of its Chinese Internet-based peers. 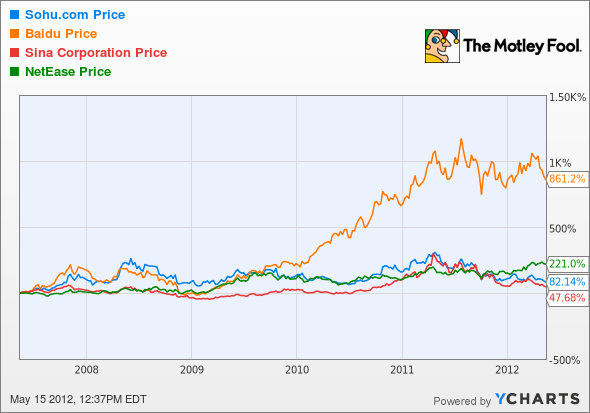 Baidu stands out as the clearest leader, and its performance shows it. There's good reason that it's known as the "Google of China." It carries a premium valuation, but has the growth and profitability to back it up.

SINA has been seeing growth deceleration of its own recently, which is partially why it's lost almost two-thirds of its value over the past 13 months. NetEase has held up relatively better than Sohu.com and SINA, but it also plays more games than the others.

What's next?
Investors had priced a lot of growth into Chinese companies, and it seems that some of that enthusiasm was a little frothy. China still remains the hottest emerging market for growth, but sometimes it's hard to put a price on it.

Use our free watchlist feature to get the latest on these Chinese Internet players.