The importance of global diversification cannot be overstated. Not only does it expose investors to the blistering speed of the developing world's economic growth, but it also insulates stock returns from regional economic downturns like the Great Recession. Without a doubt, it is one of the principal keys to successful investing in modern times.

The safest and easiest way to do it is by investing in American companies with significant operations abroad. Of particular interest on that front is McDonald's , the hamburger chain that's returned 8,000% over the past 30 years.

The promise and perils of investing abroad
The most obvious reason to diversify globally is to gain exposure to the developing world's economic growth. Over the past decade, emerging markets have expanded much more quickly than the developed world has. South Asian economies, led by India, have more than tripled their output since 2000. And if you take Japan out of the equation, the East Asian economies have done the same, going from $3.3 trillion in 2000 to $11.2 trillion in 2010. In fact, North America is the only continent that hasn't at least doubled its economic output since the turn of the century. Global diversification also acts as a hedge against regional economic downturns, a benefit that revealed its advantage in 2009. Triggered by the financial crisis, output in North America and Europe shrank that year by 3.4% and 4.3%, respectively. Yet South Asian economies simultaneously grew 8.1%. And while output in the entire East Asian and Pacific region contracted by approximately 1%, weighed down by Japan's 6.3% decline, the region's largest economy in China grew a staggering 9.2%.

These two benefits aside, however, it's important to remember that investing directly in international markets is risky. Just recently, for example, a wave of fraud has washed over Chinese small-cap stocks, costing investors billions of dollars. A typical example is Chinese Internet security software maker Qihoo 360 , which saw its shares lose more than 20% of their value by the middle of last month because of questionable accounting practices -- though they have subsequently recovered. Even the most sophisticated of investors were caught in the undertow, as famed hedge-fund manager John Paulson purportedly lost more than $100 million when Chinese forestry company Sino-Forest was revealed to be a fraud.

The best of both worlds
The most effective way to balance the benefits of global diversification without exposing your portfolio to undue risk, in turn, is to invest in American companies with global exposure like the three identified in our free report, "3 American Companies Set to Dominate the World." In addition to the companies mentioned there, two others that come to mind are Yum! Brands, the fast-food operator that got 43% of its 2010 pre-tax profit from China, and Wal-Mart, the global retail giant that looked abroad for a full 32% of its sales last year. And perhaps even better than these is McDonald's, the ubiquitous maker of the Big Mac.

It would be an egregious understatement to say that McDonald's is the world's leading restaurant chain. On a typical day, it serves an estimated 28 million people, equating to more than 10 billion customers every year, or a third more than the world's population of 6.8 billion. It's purported to be the world's largest distributor of toys. And according to a survey by Sponsorship Research International, the iconic Golden Arches are recognized by more people than the Holy Cross -- think Asia here. It should accordingly be no surprise that McDonald's global footprint is the envy of competitors. The hamburger chain operates in 119 countries, employs 1.7 million people, and has more than 33,000 restaurants worldwide. A full 54% of its locations are outside North America. McDonald's single largest country-specific presence outside the United States is in Japan, where it has nearly 3,300 locations. And its biggest regional presence is in Europe, which accounts for a full 40% of the entire company's revenue. But you don't even have to buy MDonald's directly to get access -- you could make a targeted investment in Latin America through Arcos Dorados , which operates 1,840 franchises there.

It's this diversification that's contributed to both the company's growth and the fantastic performance of its stock price over the past several years. Despite the Great Recession in the developed world, since 2007, its total revenues have grown a staggering 18.5%, from $22.8 billion to more than $27 billion last year. And its stock price has responded in kind. As my colleague Tamara Rutter discussed, the Big Mac maker has blown away less diversified competitors like Wendy's , which recently passed Burger King in domestic sales to claim the No. 2 spot behind McDonald's, and Jack in the Box , which has seen its revenue decline by more than 31% since 2007. In fact, it's the only one of the three to offer a positive return to its shareholders over the past five years, increasing by well over 100%. 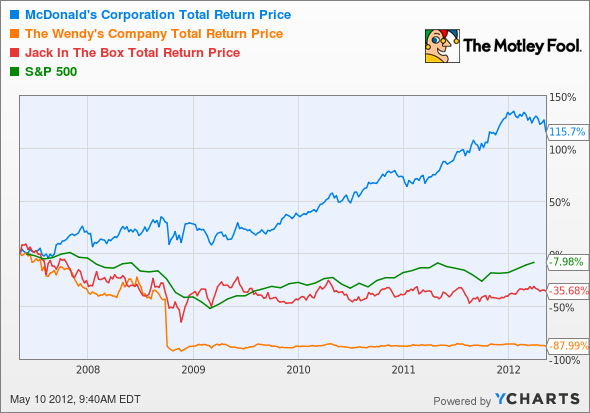 Foolish bottom line
Yes, McDonald's has its own problems. Who could forget the infamous pink-slime incident earlier this year? Yet its globally diversified operations should serve to both preserve and grow investment capital over the years to come. And it's for this reason that I believe McDonald's is a good stock for the long term.

For a handful of other companies like McDonald's, check out our recently released free report that discloses the identity of two other American companies set to dominate in emerging markets, including a stock that has doubled in the past five years and still pays an atypically generous dividend yield. Check out this report while it's still available -- it's free.