Shares of Jack in the Box hit a 52-week high on Tuesday. Let's take a look at how it got there and whether clear skies are still in the forecast.

How it got here
If there's anything to be learned from the highly competitive fast-food sector, it's that your best bet for success is to do exactly what McDonald's does. That theory may sound stupid, and it will perpetually put a company behind McDonald's in terms of innovation, but it has been the model to follow for fast-food chains over the past decade.

Like McDonald's in the early 2000s, Jack in the Box's sales were eroding in the mid-to-late 2000s, as it was focusing too intently on the young male demographic and ignoring a major consumer shift toward healthier, but still quickly prepared, food options. That's when Jack in the Box completely revamped its menu to include healthier food options, and it spent millions remodeling the inside of its locations to bring a fresher, more modern look to its restaurants. The moves are really beginning to pay off, with results in its latest quarter showing same-store sales growth of 5.6%, versus the prior year's 0.8% comparable-store sales increase.

Although it's much smaller than many of its peers, to me it appears that Jack in the Box's market-share gains are coming at the expense of Burger King and Wendy's , which have seen their operations stagnate for years.

How it stacks up
Let's see how Jack in the Box stacks up next to its peers. 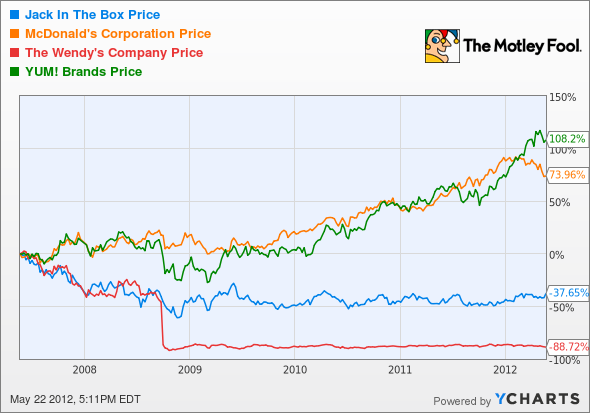 No one said turnarounds happen overnight, and the chart above is a testament to that.

The metrics above are a bit deceptive, so let's go through them one by one. Jack in the Box's sales decline might seem like a big concern, but it should be noted that the company is in the process of selling some of its stores to franchisees (thus lowering revenue). As I mentioned before, turnarounds take time.

Wendy's might seem like a prime rebound candidate, but considering that it's had a hard time staying profitable and much of its revenue gains were from its purchase and spin-off of the Arby's franchise, it's hardly the deal these figures suggest.

McDonald's and Yum! Brands -- the company behind Taco Bell, Pizza Hut, and KFC -- really have the best overall metrics, with McDonald's getting the nod between the two for having the higher dividend yield and a slightly lower price-to-cash-flow ratio. It's also worth noting that even with considerably more debt than Yum! Brands, McDonald's has a much lower debt-to-equity ratio. What both Yum! and McDonald's demonstrate is the benefit of international diversification, which Wendy's and Jack in the Box simply don't have.

What's next
Now for the real question: What's next for Jack in the Box? That depends on whether or not it can defend its gains against not only old rivals Burger King and Wendy's, which have begun new and aggressive marketing campaigns, but also nontraditional food stops like Starbucks that now offer consumers healthy fast-meal options in convenient locations just like Jack in the Box.

Our very own CAPS community gives the company a three-star rating (out of five), with an impressive 91.1% of members expecting it to outperform. I haven't, as of yet, made a CAPScall on Jack in the Box, as I find myself torn between the company's turnaround plans and the strength of its peers.

Jack in the Box is finally moving in the right direction, even if it seems like its gross margin and annual sales aren't. Its restaurants are more appealing, its menus more diverse, and its same-store sales figures robust. On the other hand, McDonald's, up-and-coming private chain Five Guys, and even nontraditional food stops like Starbucks are making it very difficult for companies like Jack in the Box to gain market share. I mean, how many vultures can feed off of the King's corpse at one time? At its current valuation, I am evenly divided on the company and feel it's worth adding to My Watchlist and re-examining the stock in six months.

Jack in the Box may not be the stock for you. If you'd like the inside scoop on three companies, including McDonald's and Yum! Brands, that appear ready to dominate the emerging markets, then click here for access to our latest -- free -- special report!

Craving more input on Jack in the Box? Start by adding it to your free and personalized watchlist. It's a free service from The Motley Fool to keep you up to date on the stocks you care about most.

Is Jack in the Box Still a Tasty Buy at a New 52-Week High? @themotleyfool #stocks $JACK $MCD $YUM $SBUX Next Article
Current