When it comes to investing, few know the rules of the road better than the Oracle of Omaha, Warren Buffett. Over the years, he's stuck to his guns, espousing the advantages of value investing, holding stocks for the long haul, and remaining cool, calm, and collected during the most turbulent market storms. He attributes much of his success to an almost inhuman ability to discipline his emotions. Perhaps even more impressive, however, is Buffett's contrarian streak, which can be summarized in the oft-cited quote: "Be fearful when others are greedy, and greedy when others are fearful."

Then again, after nearly half a century of market-beating performance, perhaps Warren finds it a little easier to abide by this mantra than your average investor. Especially since the rise of truly global markets seems to jolt indexes on a near-weekly basis today. Take a look at the Dow Jones Industrial Average or the S&P 500 for example. Both indexes reflect the stock performance of some of the largest blue-chip companies in America, and both experienced substantial run-ups in the beginning of 2012. In fact, these two indexes were practically cruising up a steady incline between January and March when you look at the chart below. 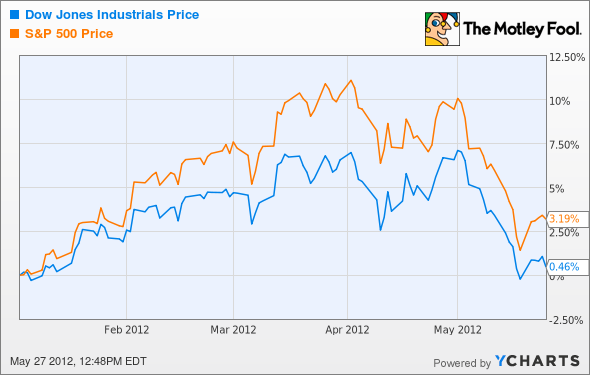 The rate of ascent was so swift that investors were practically banking on 20%-plus returns for 2012. The fear that stymied the markets last summer was but a vague memory, and market volatility nearly hit a five-year low. Sometimes referred to as the "fear gauge," the VIX approached 15, nearly 70% lower than the recent highs experienced in August of 2011.

Naturally, the good times couldn't last. According to CNN's "Fear and Greed Index," which basically breaks down the VIX into neatly categorized emotions, investors are now expressing signs of "Extreme Fear" in recent weeks, pivoting sharply in just the past month.

Why the sudden change of tune? Well, the irony of it all is that corporations actually wrapped up an astounding quarter of robust earnings. Toward the tail end of earnings season, 66% of the S&P 500 beat analyst estimates, trouncing the prior quarter's beat rate of 59% and raising the expected earnings growth rate to 7.4% for the year, up from an estimated 4.5% as of January 3rd. The industrial sector, which includes blue chips like General Electric and Honeywell , posted the strongest results, trouncing analyst estimates by over 18% on average. Honeywell's net income grew 21% year over year and raised guidance, while GE revealed a stronger balance sheet that allowed its finance unit to announce a dividend payment to the parent in recent weeks.

In light of positive corporate earnings, investors might find themselves baffled by the stock market's dip. Some will claim there's a grain of truth in the saying, "Sell in May and walk away." However, the market hit a wall for different reasons.

The Foolish takeaway
Investors eyeing the Dow should fully consider the last point to make market swings easier to digest. Information travels at extraordinary speeds today, and technology allows trades to take place almost instantaneously. For an investor who takes a Buffett-like approach, the market's ignorance of sound fundamentals can actually be beneficial. While the indexes bounces around, investors can take the opportunity to buy-in at discounted prices. There are quite a few stocks on my radar that look even more attractive during a pullback, but one that I've been consistently bullish on happens to be "The Motley Fool's Top Stock for 2012." Read our in-depth, free report, and decide for yourself whether now is the best time to buy in on this extraordinary growth story.