Shares of Copart hit a 52-week high on Friday. Let's take a look at how the company got there and whether clear skies are still in the forecast.

How it got here
With the used car market continuing to boom and consumers remaining strapped for cash since inflation is still outpacing wage growth, it's no surprise a company like Copart has put the pedal to the metal to hit a 52-week high. Copart provides remarketing services to process and sell salvaged and clean-title vehicles through its online auction software on behalf of insurance companies, finance companies, banks, and dealerships.

Copart has multiple factors working in its favor. First, according to management's comments when it reported its second-quarter results in late February, the company is on pace for record average selling prices. This speaks to the strength in the used car market and consumers' penchant for seeking a good deal.

Secondly, Copart has aggressively been repurchasing its own shares since the beginning of 2011. Although investors would rather see organic growth, we can't deny the benefit on EPS of having 21.9 million fewer shares outstanding.

Finally, the big U.S. car manufacturers, General Motors and Ford , have become their own worst enemy. Cars produced over the past 10 years are considerably more fuel efficient and reliable than they once were, which makes the desire to purchase new that much smaller. According to data from automobile research firm Polk, the average vehicle on the road today is 10.8 years old compared with just 8.6 years old in 2002.

How it stacks up
Let's see how Copart stacks up next to its peers. 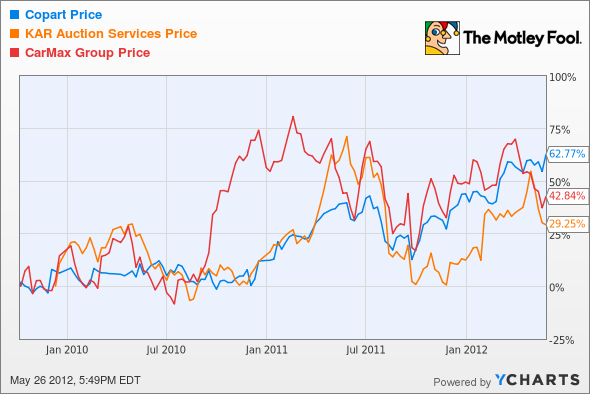 Considering the auto industry suffered through the worst recession in 70 years three years ago, these auction sites are doing very well.

There's little denying that these companies have found ways to grow despite a slow-growing economy, but not everything is as cut-and-dried as these figures suggest.

CarMax is the largest by market value, but, as you'll notice from the above metrics, it's been burning through its free cash. In fact, CarMax, despite being profitable, has netted a free cash outflow in eight of the past 10 years.

KAR Auction Services definitely looks like the value of this grouping at just 11.9 times forward earnings, and, unlike CarMax, it has the cash flow to back it up. KAR's first-quarter report that noted that a 5% rise in sales allowed it to reaffirm its full-year forecast and back up its guidance of $260 million in free cash flow.

Copart has been growing like a weed and its average selling prices have been strong, but the question that needs to be answered is: Does it deserve to be valued at double the price-to-cash-flow of KAR Auction Services? Frankly, I don't think so.

What's next
Now for the real question: What's next for Copart? That question is going to depend on whether the strength in the secondary auto market continues (which I see no reason why it wouldn't) and whether investors can justify its lofty valuation, relative to its peers, in light of a complete redesign of its online auction interface.

Our very own CAPS community gives the company a four-star rating (out of five), with an overwhelming 97.1% of members expecting it to outperform. I haven't personally made a CAPScall on Copart in either direction as I'm currently torn on the direction it'll head over the next year and a half.

Despite the strength in secondary market sales and Copart achieving solid results, I'm concerned about the company's online auction platform upgrade and what delays/disruptions that might cause, as well as its valuation to its peers. KAR Auction is producing cash flow at a much steadier rate and is priced much more attractively than Copart. If you twisted my arm, I'd be leaning toward a call of underperform over the near 12-18 months, with a reevaluation of the stock after the full implementation of its platform upgrades.

Copart may not be the stock for you; if you'd like the inside scoop on three companies that could help you retire rich, then click here for access to our latest free special report that's bound to make you jump for joy.

Craving more input on Copart? Start by adding it to your free and personalized watchlist. It's a free service from The Motley Fool to keep you up to date on the stocks you care about most.