Shares of Altria hit a 52-week high yesterday. Let's take a look at how the company got there to find out whether clear skies remain on the horizon.

How it got here
Tobacco is a rather glacial industry. Major events can roil the waters and break off a few icebergs every now and then, but momentum still keeps rolling inexorably onwards. Major players have had remarkably similar performances over the past five years. Altria's best-in-class performance tops Lorillard and Philip Morris by the slimmest of margins, and only Vector Group is anything close to a laggard: 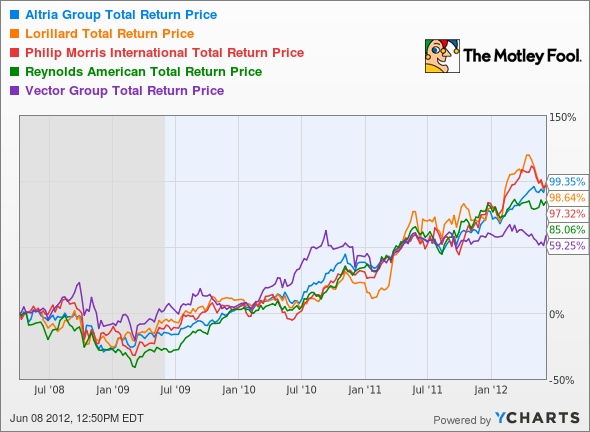 Altria makes new highs rather regularly, but so do many of its competitors, and none have seen their P/E ratios bloat so much. Only Reynolds American has gotten similarly inflated from earlier levels, but it's not really a contest as to which company is gaining the most on investor demand: 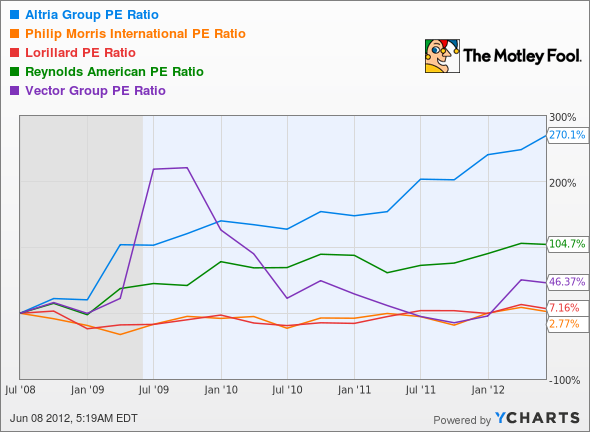 The answer to this puzzle is easy to find. Since spinning off its international Philip Morris operations, earnings per share have fallen flat, as have Reynolds' and Vector's: 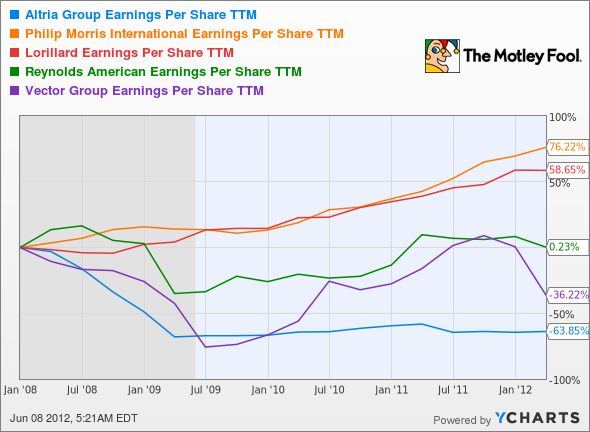 What you need to know
Altria's valuation hasn't been this high in nearly 15 years, but investors keep buying it for safety's sake. The company has a yield in line with most peers, which certainly helps keep it on the upswing:

Altria's benefit may be in its focus on America -- Philip Morris could suffer if the euro implodes -- but that doesn't offer a compelling argument for its success over fellow American vendor Lorillard, which has both a lower valuation and a lower payout ratio. Altria's been losing market share to Lorillard at the same time, which has pushed Altria to cut large portions of their workforce. Still, it rolls on. Is it the best tobacco company? Possibly not. However, it is currently the best tobacco stock by a very slim margin. For defensive investors, that might be enough.

What's next?
Where does Altria go from here? That may depend more on nervous investors than on anything the company does in its own right. There's not much Altria can do to improve its earnings per share beyond more buybacks, and even those haven't really mattered, as there are only 3% fewer Altria shares outstanding now than there were five years ago.

The Motley Fool's CAPS community has given Altria a perfect five-star rating, with 98.2% of our CAPS All-Stars expecting the stock to continue to outperform. In a recent analyst roundtable, I called Altria a market performer, but I may have underestimated the flight to safety that many seek from this company's yield and resistance to economic headwinds. There's no reason to expect it to collapse quite as badly in a bear market as the indexes would. That's already been proven true once in the recent past. Defense wins championships, as they say in basketball.

Interested in tracking this stock as it continues on its path? Add Altria to your Watchlist now for all the news we Fools can find, delivered to your inbox as it happens. If you want to build the best defensive team your portfolio can get, The Motley Fool's got another nine dividend dynamos to draft. Find out everything you need to know in our most popular free report.