Shares of Verizon hit a 52-week high on Friday. Let's take a look at how the company got there to find out whether clear skies remain on the horizon.

How it got here
Verizon floated above the bruising AT&T and T-Mobile buyout fray over the winter, and emerged as a surprise winner in the spectrum wars. By inking a $3.6 billion deal that could ultimately be more important to the wireless landscape than the T-Mobile buyout, Verizon positioned itself to leapfrog AT&T. The market expects the deal to go through despite regulatory foot-dragging, which could explain why Verizon's now the best-performing major telecom over the past few years: 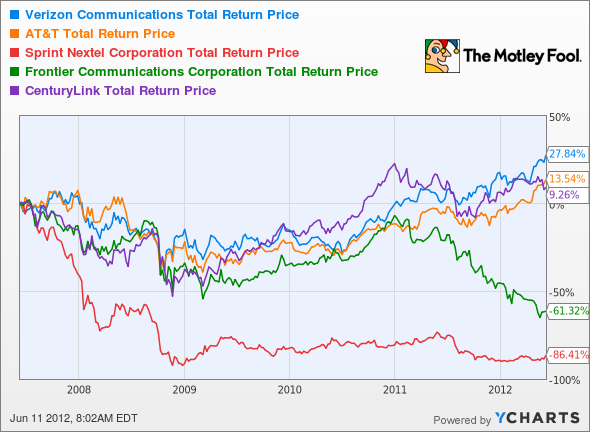 It's also worth noting that Verizon and AT&T are both benefiting from a flight to safety that's buoyed many other defensive stocks, including those in the tobacco and utilities sectors. Strong dividends matched with a virtually unassailable moat keep investors coming back for more in bad times.

In addition to its spectrum grab, Verizon's also made recent inroads in automotive connectivity and has partnered with its erstwhile rival to push an NFC-based digital wallet. Verizon's also pushed toward digital video distribution for its mobile customers, but it's too early to say how much of an impact that will have on the company's bottom line. A streak of generally positive news is always welcomed in a rather slow-moving telecom industry.

What you need to know
Many telecom companies, including Verizon, have rather high P/Es at present, but my fellow Fool Brian Stoffel has noted that the P/E ratio just isn't that important when examining values in the industry. Free cash flow is a more sensible number to analyze than net income due to the telecom infrastructure's enormous capital needs. With that in mind, let's look at how Verizon stacks up compared to its peers:

As you can see, each company has a much better price-to-free-cash-flow ratio than they do P/E, but none have quite as wide a gap as Verizon. 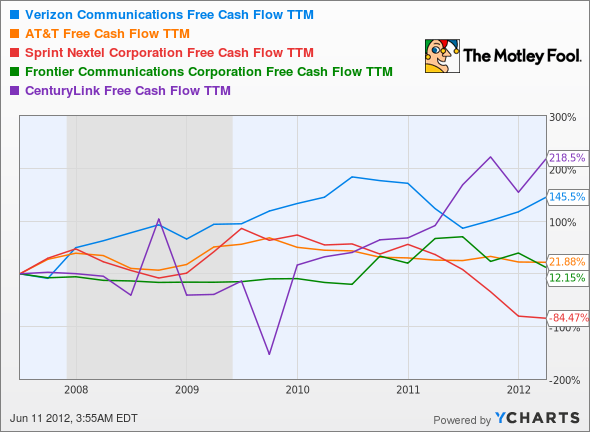 Sprint's battle with the Big Two hasn't been a profitable one. On the other hand, diversified telecom CenturyLink has been improving its prospects by moving into fiber-optic networks and cloud computing, which puts it in competition with Verizon's recently acquired Terremark subsidiary.

What's next?
Where does Verizon go from here? That will depend on several factors, as one might expect from such a lumbering enterprise. A regulatory smackdown of its spectrum purchase could send the company reeling. Exponentially rising smartphone data use could hinder profits or cause market-share losses to Sprint (with the last truly "unlimited" data plan remaining) or prepaid carriers. Smartphone subsidies might be rolled back, bringing a temporary boost to the bottom line at the risk of infuriating hardware partners and new subscribers. For the moment, few of these scenarios present a legitimate long-term threat, let alone a mortal danger.

The Motley Fool's CAPS community is heartily in favor of Verizon in the telecom wars, granting it a four-star rating. Of its American competitors discussed here, only CenturyLink earns a similarly bullish sentiment from our CAPS players.

Interested in tracking this stock as it continues on its path? Add Verizon to your watchlist now for all the news we Fools can find, delivered to your inbox as it happens. If you're looking for some other dynamos for your defensive portfolio, The Motley Fool's put together a free report featuring nine rock-solid dividend stocks you can buy today. AT&T is one -- click here to find out the rest at no cost.