Shares of SUPERVALU hit a 52-week low yesterday. Let's take a look at how the company got there to find out whether cloudy skies remain on the horizon.

How it got here
SUPERVALU's been hit hard as it struggles to deal with multiple issues, whether it's a massive pile of debt, a severely unfunded pension pool, or antiquated stores badly in need of rehabilitation. In spite of a recent earnings beat, the company's had a difficult time maintaining investors' interest. It's not the only grocer having trouble, but it's by far the worst performer -- its five-year decline is more than twice as deep as Safeway's and four times as deep as Kroger's : 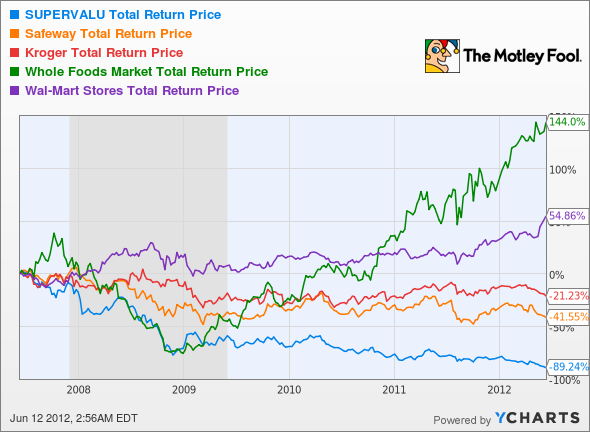 Wal-Mart is a formidable foe in its own right, as over half its total U.S. sales came from the grocery aisles. Diversity and supply-chain superiority has buoyed it above grocery-focused peers. The most notable performer in this segment is obviously Whole Foods , which proves that catering to discerning customers is a winning strategy. It's the polar opposite of SUPERVALU, which is more focused on the deep-discount experience. Unfortunately, that puts it at odds with Wal-Mart, a daunting opponent in any industry.

What you need to know
SUPERVALU might be in the doghouse, but does that mean you should count it out? That depends on how you examine its numbers. SUPERVALU's recent negative earnings were largely the result of impairment charges and other one-time write-offs. Its price-to-free cash flow tells a much more compelling tale to investors, as the high-yielding grocer is trading at a deep, deep discount to its peers:

Source: Morningstar. NM = not material, due to negative earnings.

What do we make of this? The market seems to have given up on SUPERVALU, despite the fact that its free cash flow has held up as revenue shrinks. It's especially positive in light of the company's steady chipping away at that big mountain of debt: 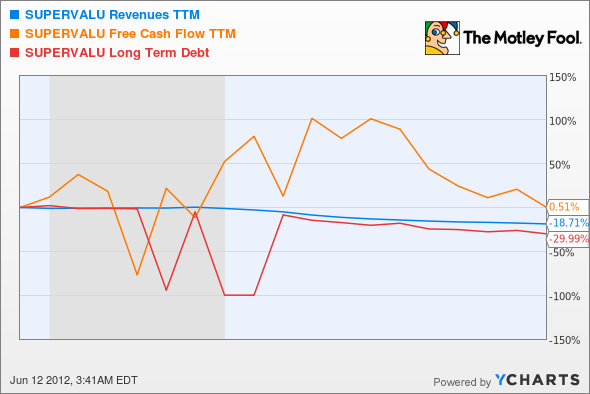 Fool analyst Jim Royal thought the company was a great value (or even a super value, you might say) back in January, following on the heels of Fool Austin Smith's singling out the company as a top stock for 2012. Unfortunately, neither prediction has proven true yet, but they expect to be right over the long haul as that debt dwindles and SUPERVALU continues to make progress on its various expansion projects.

What's next?
Where does SUPERVALU go from here? That will depend on its turnaround success. The Motley Fool's CAPS community has given SUPERVALU a four-star rating, which is actually lower than the perfect five-star rank it boasted last year. Still, all but 21 of 248 CAPS All-Stars expect SUPERVALU to beat the market going forward.

That dividend is appealing, but I'm not sure I'd buy in just yet. The company's next earnings release isn't scheduled until late July, and I'm hopeful that the company will offer some positive news at that time. Even so, its last report beat expectations, and look where we are today. Will the market ever view this downtrodden grocer as the hidden gem our analysts believe it is?

Interested in tracking this stock as it continues on its path? Add SUPERVALU to your Watchlist now for all the news we Fools can find, delivered to your inbox as it happens. If you're on the hunt for some dividend dynamos with more assured futures, take a look at The Motley Fool's most popular free report: "Secure Your Future with 9 Rock-Solid Dividend Stocks."