I've long suspected as much, but it's now official: Nokia is junk.

Following up last week's handful of announcements of the deepest round of job cuts in as many months, the divestiture of its super-high-end luxury brand Vertu, and management shakeup, Moody's announced that it was cutting its rating on Nokia's paper to Ba1, squarely in junk turf. On top of that, the agency kept its outlook on the Finnish smartphone giant at negative, meaning its next move would probably be lower as opposed to higher.

The company cited the announcements the previous day as an indication that its woes were worse than most investors were expecting. This is the second time in two months that Moody's has downgraded Nokia's credit rating, even though Nokia has aggressive plans to cut costs and reduce its cash burn.

Here's how Nokia's operating cash flow and current ratio have fared over the past five years, with the past year in particular seeing declines. 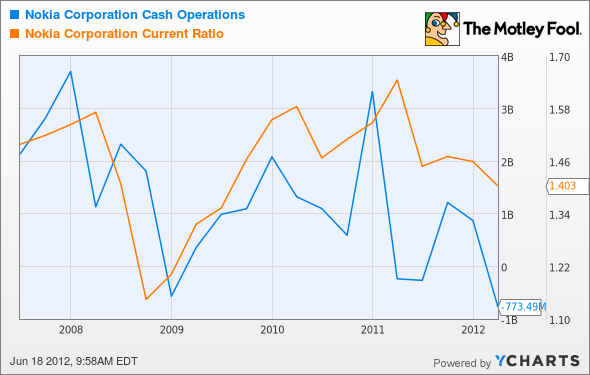 Moody's acknowledges that the desperate measures are the result of desperate times and are necessary evils if the company hopes to return to profitability amid brutal competition from cash-rich rivals Apple and Google . Apple now sits on $110.2 billion in cash, and Google has about $44.6 billion to its name.

The ratings agency also added, "A return to profitability also depends on Nokia successfully transitioning its range of smartphones to the new [Microsoft ] Windows operating system and stabilizing its feature phone business."

However, on the equity side, analysts aren't so hopeful. BMO Capital Markets analyst Tim Long wrote in a research note: "We assume zero value for the device and Nokia Siemens Networks businesses. We see little hope for a turnaround from here even with a refined strategy." Yup. Zero.

Thus, Nokia embarks upon the sad path to trading down to tangible book value. Shares currently trade at 0.7 times book value and 1.5 times tangible book value. Long values Nokia under $9 billion, mostly because of its $6 billion in cash and $2.5 billion patent portfolio. That's slightly less than the current market cap of about $9.5 billion, down from a whopping $150 billion just four years ago. 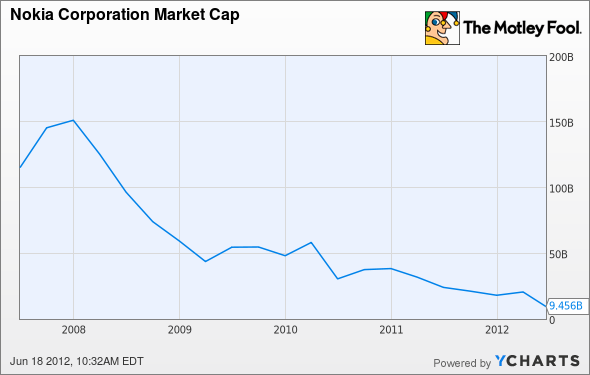 And while the smartphone revolution has nearly laid waste to Nokia, there are plenty of clear winners from this trillion-dollar trend. The Fool recently identified one hidden component supplier that has as much to gain from the rise of smartphone as better-known names like Apple and Google but remains largely unknown. To find out about this opportunity, grab your copy of this free research report today.