Natural gas has attracted a lot of attention in the past year as prices have reached decade lows due to the fracking boom. Cheniere Energy is one of the companies on the short list of potential multibagging plays thanks to its plans to become the first American company to export natural gas from the continental U.S. in 40 years. But the company, which currently imports LNG, has had its share of problems in recent years. Cheniere hasn't had a profitable 12 months since 2003, and even then, the company was barely in the black, as the chart below shows: 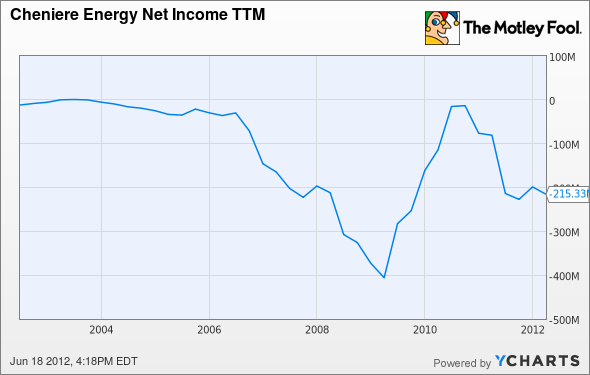 The bet on import terminals turned out to be a bad one.

The company was founded in 1996 as an oil and gas exploration company but switched its focus to importing and regasification in 2000. In its 16 years, Cheniere has racked up more than $1.3 billion in total losses and nearly $2.7 billion in debt. Despite what looks like a perennially dysfunctional business, its prospective export terminal offers a compelling reason to invest. Let's take a look at that and two other reasons you might want to buy Cheniere Energy.

Sabine Pass Terminal
Several events have taken the Sabine Pass Export Terminal from fantasy to reality over the past year, including approval from the Department of Energy and more customers signing purchasing contracts. In the process, Cheniere has jumped from a 52-week low of $3.17 all the way up to nearly $19 in April. The company plans to begin exporting LNG by late 2015, shipping about 16 million tons per year (equal to 832 million Btu.) Customers include BG Group, Gas Natural Fenosa, Gail (India) Ltd., and Korea Gas.

With gas prices in Asia between $14/MMBtu to $16/MMBtu and $9/MMBtu to $12 per MMBtu in Europe, exporting gas at a North American market price of under $3/MMBtu seems like a no-brainer. At today's prices, it would cost about $9/MMBtu for Cheniere to liquefy and export the gas, meaning selling its full capacity to Asia could yield gross profits around $5 billion. By comparison, the company currently has a market cap under $2 billion.

Major backing
While some may remain skeptical of market prices holding up or Cheniere escaping from its huge debt burden, some big names have stepped in to provide the capital Cheniere needs. Private equity firm Blackstone Group invested $2 billion in Cheniere Energy Partners, a master limited partnership run by Cheniere Energy, sending both Cheniere Energy and Cheniere Energy Partners up more than 10% on the news. The Blackstone deal, which came in February, was followed by another $4 billion round of financing from a consortium of banks including JPMorgan Chase, Morgan Stanley, and HSBC to help build the Sabine Pass facility.

A recent buy rating from Citigroup was a further indication of Wall Street's confidence in LNG exports. The Citigroup analyst said that all the pieces appear to be falling into place for the project and gave it a price target of $26, almost twice as high as its current value. He expects the stock to rise once construction begins. The company also recently received a credit rating upgrade from Standard & Poor's from a "B-" to a "B+" due its moves to pay down debt with cash received from equity offerings.

Recent pullback
Cheniere has pulled back sharply from highs it reached near $19 in April. The stock now trades around $14, and with a P/S ratio of 6.6 it looks comparable to other growth stocks. Shares have also gotten a short-term boost from rising natural-gas prices. United States Natural Gas , the ETF trading natural-gas prices, jumped from $15.25 to $18.30 in just a few days, and actual commodity prices have risen to $2.65/MMBtu, up from less than $2 just a few months ago. Oil and gas tycoon T. Boone Pickens said he believes natural-gas prices have bottomed and will rise to $3 or more by next summer, citing the number of gas rigs dropping from 800 to 500 as evidence that production is slowing.

Considering that optimism is only likely to build as the company breaks ground on the export facility, a better buying opportunity may not come in the future.

Foolish takeaway
Several factors could disrupt Cheniere's path to riches. Market prices could easily change between now and 2015, and, of course, it's not the only company attempting to get in on the LNG export bonanza. ExxonMobil has several projects in Indonesia and other parts of the world to export LNG, and other companies are working on projects in Australia or off the coast of East Africa. Fracking is also gaining use in Europe, meaning gas prices on that continent could come down in the next few years. But Cheniere looks to be the only exporter from North America when 2015 rolls around, and with the gas glut, this looks like as much of an arbitrage opportunity as equity investors are going to find. The company has the support of the big Wall Street banks, and all the pieces appear to be falling to place. Assuming everything stays on track, this stock could easily be a multibagger five years from now.

With oil prices low, now's a great time to get in on another energy play as oil stocks are likely undervalued. Take advantage of the opportunity by checking out our special free report: "3 Stocks for $100 Oil." You can get your copy right now. All you have to do is click here.