Shares of Avon Products hit a 52-week low on Monday. Let's take a look at how it got there and see whether cloudy skies are still in the forecast.

How it got here
All the kings horses, and all the kings men -- and even Warren Buffett's Berkshire Hathaway -- couldn't get privately held Coty interested in purchasing Avon again.

In early April, Coty made a $23.25-per-share, $10 billion bid to purchase the beauty products supplier. Avon, at the time, considered the bid far too low, while Coty refused to make the bid formal until it had seen Avon's books. The bid would later be raised to $10.7 billion with Berkshire Hathaway stepping in to provide financing for the deal, if necessary. That financing, however, was not needed, as Coty dropped the bid last month after weeks of contentious back-and-forth banter.

Facing the prospects of slow growth, both domestically and internationally, high levels of debt, and now a series of lawsuits perpetuated by investors who feel Avon didn't act in the best interests of its shareholders, Avon management would just as soon crawl under a rock.

What makes the situation even worse is the fact that the beauty supply sector has been performing remarkably well -- with the exception of Avon, of course. Estee Lauder has nearly doubled in the past two years, with the company boosting its full-year guidance in its latest quarter thanks to strength from Asia. Nu Skin Enterprises is up more than 50% in that time frame even after being lumped in with Herbalife in the David Einhorn debacle. Even beauty salons and supply stores like Ulta Beauty are crushing Wall Street's estimates at every turn.

How it stacks up
Let's see how Avon stacks up next to its peers. 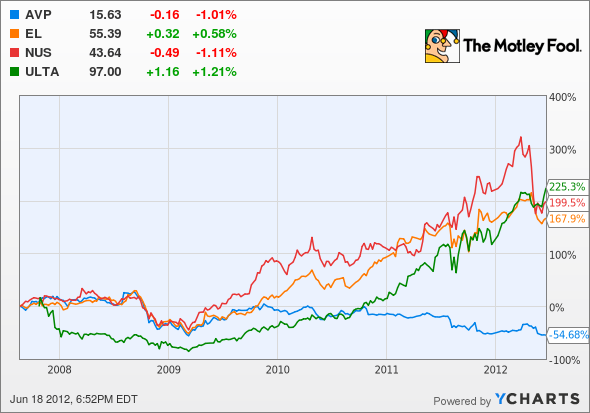 This is the easiest game of "Which one doesn't belong" I have ever played!

One of the first things that is apparent is the inverse relationship between debt levels and performance over the past five years.

Ulta Salon bears quite the premium, but considering it has no debt and a five-year projected growth rate of 25%, its valuation becomes a bit easier to tolerate. Nu Skin, despite its recent hiccup, reported a 35% boost in sales from China and remains relatively cheap given its recent growth surge and small debt load. Even Estee Lauder, which has used debt regularly to facilitate its global expansion efforts, has only $20 million in net debt. It's Avon's $2.15 billion in net debt that makes the company a severe investing liability.

Dividends are also a major selling point of these companies. Avon's nearly 6% yield may seem attractive, but considering that its earnings misses are getting wider and its dividend payout is in excess of 100%, I'm not certain it's sustainable. Nu Skin's 1.8% yield and Estee Lauder's 1% yield aren't much to look at, but they seem much more likely to head higher than Avon's payout.

What's next
Now for the $64,000 question: What's next for Avon Products? The answer is largely dependent on whether it can get its large debt load under control, retain market share domestically while growing internationally, and reduce turnover among its representatives.

Our very own CAPS community gives the company a three-star rating (out of five), with 88.7% of members who've rated it expecting it to outperform. Although I've yet to make a CAPScall on Avon in either direction (I had been waiting until after Coty either purchased Avon or rescinded its offer), I'm now ready to enter a resounding call of underperform.

To me at least, things look very dire for Avon. Total sales last quarter decreased by 1% and things could have been worse had the company not boosted prices. That sales decline also includes considerably stronger international markets. This lack of growth comes when nearly every other personal beauty company is growing rapidly. It also has a large amount of debt, which makes expanding into new markets and researching new products a burden. Finally, since it's a direct-to-seller company much like Herbalife, turnover tends to be high. It can't grow, it can't pay down its debt, it's paying out way too much to shareholders in the form of a dividend, and it can't hit the broad side of Wall Street's barn when earnings season rolls around. That's a blatant underperform call in my book.

If Avon isn't the right stock for you, then perhaps you should consider giving three selections from our team at Motley Fool Stock Advisor a look. These three stocks are expected to grow robustly in the emerging markets and could give your portfolio the boost it needs. Get your copy of this latest report for free by clicking here.

Craving more input on Avon Products? Start by adding it to your free and personalized watchlist. It's a free service from The Motley Fool to keep you up to date on the stocks you care about most.