Less than two weeks ago, we crossed the halfway point for 2012. Checking and worrying about your stocks on a daily basis is never a good idea -- but it's worth checking in with your holdings every six months or so.

When it comes to Chinese Internet stocks, the story has been mixed. Today, I'll explain why Sohu has lost to the market, and what investors need to know moving forward. The company runs several Internet services, primarily focused around its search engine, and online game hosting. Before diving in, though, let's take a look at how the company has fared versus the S&P 500 in 2012. 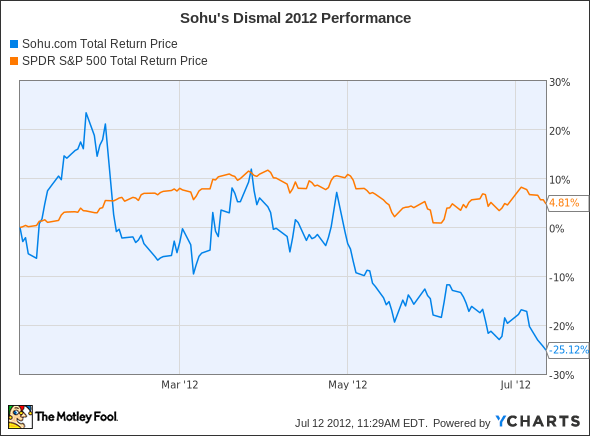 The stock performed fairly well until late April, and has been in a steady plunge ever since. Let's dig deeper to see why.

Based on the first four numbers alone, Sohu actually looks like quite the steal right now. But that pesky earnings number shows a lot to worry about.

Back in January, the short-sellers saw something fishy in Sohu and started pushing the stock down, even as the company attempts to eat away at Baidu's search dominance in China.

As fellow Fool Rick Munarriz pointed out when fourth-quarter earnings came out, Sohu was growing the top line quickly, but that wasn't necessarily translating into similar growth in profitability. The company's foray into video streaming doesn't have great margins yet, and Sohu still has to compete with Chinese leaders Youku and Toudu .

When first-quarter results came out in May, fears of uncontrollable costs were confirmed. While revenue grew at a nice 30% clip, the costs of online ad revenues grew 75% and operating expenses ballooned 48%. As long as the growth of costs outweighs the growth of revenues, investors are in for a world of hurt.

As other Fools have pointed out, the company is doing a great job of growing its business outside brand advertising, but, as we've noted, "all it takes is weakness in one of them ... to drown out the success that the company is having in online gaming and search."

If you'd like to stick to safer, more solid bets that still give you exposure to emerging markets, check out our special free report: 3 American Companies Set to Dominate the World. Inside, you'll get the names and tickers of three familiar U.S. companies that already have the upper hand in countries like China. Get your copy of the report today, absolutely free!