The Motley Fool has been making successful stock picks for many years, but we don’t always agree on what a great stock looks like. That’s what makes us motley," and it’s one of our core values. We can disagree respectfully, as we often do. Investors do better when they share their knowledge.

In that spirit, we three Fools have banded together to find the market’s best and worst stocks, which we’ll rate on The Motley Fool’s CAPS system as outperformers or underperformers. We’ll be accountable for every pick, based on the sum of our knowledge, and the balance of our decisions. Today, we’ll be discussing Nokia , a formerly dominant mobile phone manufacturer that’s fallen on hard times lately.

Nokia by the numbers
Here’s a quick snapshot of the company’s most important numbers:

Alex’s take
Right off the bat, the big-picture numbers paint a really grim big picture. From 24% market share, to 20%, in two quarters’ time? A smartphone market share that’s been cleaved in half? Ouch. That’s just brutal. History is littered with once-dominant tech manufacturers who have fallen on hard times, and Nokia and Research in Motion present two of the clearest examples.

But I can’t just dismiss Nokia out of hand. Maybe it’s the result of my re-watching the Star Trek remake, the one with the shameless (and incongruous) Nokia product placement: How could Nokia survive to the 2200s, especially in the prevailing collectivist ethos of the Star Trek universe? Nokia’s been a survivor for a long time, and it’s certainly managed to successfully transform as the world’s advanced through earlier technological shifts. But its near-term prospects are lashed firmly to the success of Microsoft’s Windows Phone 8, an unreleased mobile operating system that would (theoretically, anyway) improve on an OS that captured just 2.7% of the smartphone market in the second quarter.

Microsoft, certainly, is lashed just as firmly to Nokia’s success, for the moment, and has every incentive to make the partnership work. But, regardless of that mobile mutually-assured-destruction looming over both companies should Windows 8 flop on mobile, Nokia’s current market cap is right in line with its available cash and investments. Its enterprise value (click the phrase for a definition) is well below its available cash: 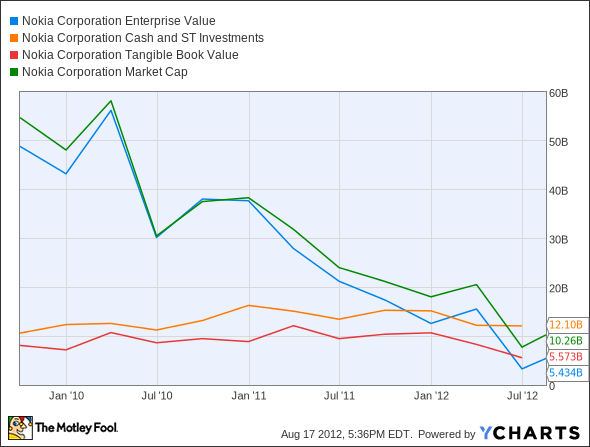 This doesn’t take into account Nokia’s patent portfolio, which is easily comparable to pre-Google acquisition Motorola in terms of scope and worth. Sean’s got a better take on that, and I’ll let him have the spotlight for patent discussion, but it seems clear that anyone buying Nokia now would be getting a company discounted to the point where everything beyond its current assets -- and possibly some of the assets -- are essentially free.

Nokia may very well have to tap its cash reserves to fund a turnaround, but it’s yet to drop into negative free cash flow territory, even though net income’s taken a serious hit: 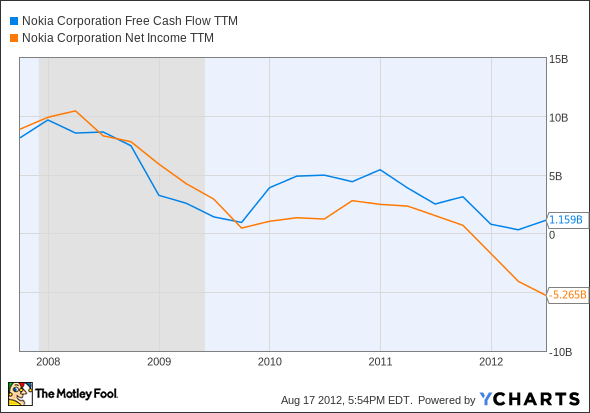 Windows 8 could be a sleeper hit, and that would help Nokia become relevant again. Is there room for a third successful mobile OS, though? I’m not sure. But I’m willing to give Nokia a short-term outperform call, while the whole is still less than the sum of the parts.

Sean’s take
Cavemen chiseled the wheel -- at least according to The Flintstones -- and we still use that design, so there’s really no reason to believe that Nokia can’t, at least partially, rebound from its current levels and live off of its patents and legacy flip phones for quite some time.

Since I took the unpopular stance in July that Nokia was ripe for a rebound, the stock has bounced well off its lows. My reasoning behind that particular article had to do with the market completely ignoring certain hidden values within Nokia that would make it worth considerably more than its current value. Let’s again review those basic components, and see if anything has dramatically changed since Nokia reported its second-quarter results.

The two biggest value drivers for Nokia are its net cash and its patent portfolio. Although Nokia is in the process of spending $1.6 billion in order to restructure, it still ended the quarter with $5.2 billion in net cash. We’ve already seen some of that $1.6 billion factored into its cash burn, so I feel very comfortable sticking with my expectations that $3.6 billion will be left over by the end of 2013, losses included.

Nokia’s patent portfolio is another often overlooked gem. Nokia’s roughly 10,000 patents generate $650 million in revenue annually, and very easily could fetch anywhere from four to 10 times revenue. InterDigital received just $221,000 for each patent it recently sold to Intel, while Nortel’s patent sale to the Apple , RIM, and Microsoft consortium fetched $750,000 each. Conservatively, this patent portfolio is worth $4.5 billion to $5 billion.

We also can’t overlook Nokia’s plant equipment and inventory. I’ve heard that Nokia’s $2.2 billion in inventory could be written down to zero, but I find that highly unlikely. Similarly, Nokia has $1.7 billion worth of property and plant equipment. Both figures here are down from the prior quarter but, combined, could still garner $1.5 billion at a discount.

Finally, there lies the potential that Nokia could split its operations into its three components: location and commerce (I.e. its Navteq brand); the Nokia Siemens networking business; and its devices and services operations, in order to unlock value. Even with Nokia’s dismal quarterly loss, its Navteq brand is still growing, and shows promise across smartphone networks, and its networking solution business should still command around $1 billion.

Added up, my original estimate in July valued Nokia around $13.9 billion. My new valuation places Nokia still around $13.1 billion to $13.6 billion, or $3.53 to $3.66. There’s still decent appreciation to be had here from current levels, and I also rate it an outperform.

Travis’ take
When I read Alex and Sean’s arguments, what I heard sounded something like, "Yeah Nokia’s businesses stink, but maybe there’s value on the balance sheet somewhere." That’s a risky position at the very least.

When I look at Nokia broadly, I see a company that is losing money, and becoming less and less relevant to consumers by the day. But is there still value on the balance sheet?

I’ll cover the patent argument first. As someone who's an inventor on a handful of patents that are barely worth the paper they’re printed on, I know that the value of a patent can vary wildly. When Microsoft, Google, and Apple began buying gobs of patents, it was likely a very small handful of 10 to 20 patents that carried the most value. I haven’t reviewed Nokia’s patents, but saying that the stock is a buy, just because of patents, is risky at best. Yes, the company has a nice cash flow from IP deals with Apple and many others, but that’s never been the company’s long-term plan.

Let’s also remember that the IP grabs at Motorola Mobility, AOL, Novell, and Nortel only took place after those companies lost all relevance in their respective markets -- so unlocking value will likely be limited to licensing. Add in the fact that major mobile players, like Apple, Google, and Samsung, have already armed themselves for this war of mutually-assured destruction, and it makes much less sense for any of them to go after Nokia’s portfolio.

Plus, patents are only useful as long as someone wants to make products that use them. Google and Apple are on the cutting edge of the smartphone market, filing for new IP along the way. I doubt Nokia is holding out hope that the IP its Nokia 3310 is based on will be relevant in another five years, considering today’s fast-changing market.

Are Nokia’s patents worth something? Yes. But it doesn’t make the stock a buy, because it’s very difficult to put a value on the portfolio until someone actually buys it.

More fundamentally, the company’s operations are a mess, and I wouldn’t want to own any of its businesses, to be honest. Devices and services had 26% fewer sales last quarter (34% for smart devices). Unless Microsoft and Nokia are able to pull a rabbit from their hat, I see this business going the way of the Blackberry. Location and commerce only grew slightly, while operating losses grew in a business that is being commoditized by the day. Navigation is coming on every smartphone these days and, eventually, automakers will be forced to get with the times, and stop charging extra for it, hurting Nokia’s small presence in the business. Even Nokia Siemens Networks saw an 8% decline in sales, and reported an operating margin of negative 6.8%.

The only argument you can make for buying Nokia is the company’s balance sheet, but the company is destroying value every day it stays in business. The cash flow numbers are also misleading. The company received 400 million euro in pre-payments for IPR licenses, $250 million in cash from Microsoft to develop phones using its operating system (showing both companies’ desperation), and an equity investment from Siemens for their partnership. Sure, cash was up year over year, but not because the business is healthy.

I’m giving Nokia two thumbs down until the company goes bankrupt, or liquidates its valuable assets to a good tech company. The only downside of an underperform call is an announcement that someone pays an arm and a leg for its IP. That's unlikely, given the fact that patent litigation between Apple, Google, and Samsung has already begun.

The final call
There’s some disagreement here, but with two of us willing to issue the thumbs-up, it looks like Nokia will get an outperform CAPScall on our TMFYoungGuns CAPS portfolio -- at least for the moment. We may have to revisit our decision in the near future if it looks like Nokia’s trying to stick both feet in the grave. This isn’t a buy-it-for-life call by a long shot!

One of the best ways to stay ahead of the smartphone game is the Fool’s new premium research service. We cover multiple angles, and you can get in-depth information on both Apple and Microsoft for a full view of the mobile battlefield. It’s less than the cost of one average trade, and you get a full year’s worth of updates. What are you waiting for? Click on Apple or Microsoft to start your research now.