Just how weak has the solar industry gotten in China? Even the Chinese government can't seem to save the industry from its own problems or the challenges facing the global industry.

LDK Solar finally reported earnings for the second quarter this morning, and they were terrible, as I expected. Net sales were just $235.4 million, net loss was an incredible $254.3 million, and gross margin was negative-65.5%. The numbers have been bad in solar, but this was incredible.

Last October, I said LDK Solar was the riskiest stock in solar because of terrible margins and a high level of debt. The narrative hasn't changed in the past year; in fact, it's gotten worse. And so has the stock.

All three companies I listed as high-risk -- LDK Solar, Suntech Power, and Hanwha SolarOne -- have had massive declines in price, and they're all reporting big losses. 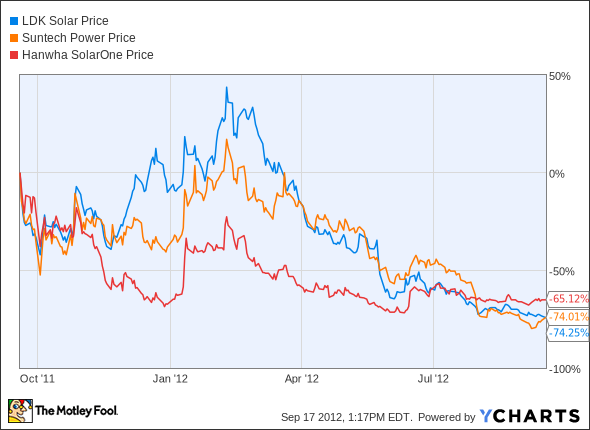 Now, this isn't to say that others have done better on the market -- far from it. But U.S. companies such as First Solar are starting to see operational improvements, not decline. And markets in the U.S. and Europe are starting to close off Chinese manufacturers just as their markets are becoming truly sustainable.

Shakeout comes to China
Solar companies have been going bankrupt in the U.S. and Europe for well over a year now, but China has largely been left alone, at least on the module side. That can't last forever, with the amount of debt outstanding on manufacturers' balance sheets, and there are signs that China is starting to capitulate.

The reaction to the declining fundamentals is a slow rationalization of overcapacity. Trina Solar announced that it will focus on its systems business and reduce expenses and headcount in its normal manufacturing business. Suntech said today that it will cut cell capacity to 1.8 GW, which would "affect" 1,500 employees in China. The company's module capacity will remain at 2.4 GW.

These aren't out-and-out white flags from solar manufacturers, but I wouldn't expect a quick decline of Chinese manufacturers. Capacity will slowly be taken off the market, financials will get worse, and slowly companies will consolidate with the assistance of the government, which has provided loans for expansion to nearly all of them.

Who is in trouble?
LDK Solar is still on the top of my list of companies that will eventually go under, but it isn't the only one. I look at gross margin as an indicator of health, and any company with a low-single-digit or negative margin at this point is in serious trouble. But what really worries me is debt, especially short-term debt that can pull the rug out from a company.

ReneSola posted a negative gross margin of 0.6% in the second quarter, and with $691 million in short-term debt, this would be near the top of my list of stocks to avoid.

Rounding out my list is the largest module maker in the world -- Suntech Power. This company has gone through fraud problems and debt woes, and now it's cutting capacity. The company hasn't released second-quarter earnings yet, but we know the gross margin should be about negative-10% and that it had short-term debt of $1.6 billion and total debt of $2.3 billion. That has disaster written all over it.

China's strategy changes
The changes for Trina Solar and Suntech are just the tip of the iceberg for Chinese solar manufacturers. More companies will have to transition away from money-losing operations, especially if Europe imposes tariffs the way the U.S. did. Even strong Chinese companies like Yingli Green Energy, Trina Solar, and Canadian Solar have a lot of question marks ahead.

So who is actually making a profit in solar with all of these headwinds? You might be surprised to hear that it's American company First Solar. We've highlighted how the company has done it and what the future looks like in our premium report on the stock. Click here to find out more.