Shares of Royal Gold hit a 52-week high on Friday. Let's take a look at how it got there and see if clear skies are still in the forecast.

How it got here
If you've ever wondered what it'd look like if Silver Wheaton had a sister company in the gold sector, then Royal Gold is it!

Silver Wheaton, as you'll recall, isn't a physical miner, but instead purchases interests in mines in exchange for an upfront payment to help fund mine development costs. In exchange for this payment, Silver Wheaton receives a low fixed-cost price on the retrieved resources. Royal Gold does the same thing, except it's targeted not at silver, but gold.

As of early August, the company had 193 various mine interests around the world. Some of its most lucrative interests are derived from Goldcorp's Penasquito mine which contains upwards of 16 million ounces of gold, Barrick Gold's Pascua-Lama development which reported close to 15 million ounces, and a recently struck deal with Thompson Creek Metals that gives Royal Gold a 52% interest in the 6 million ounces of gold held in Mt. Milligan. With its interests covering a wide swath of development and production stages, Royal Gold's royalty portfolio is incredibly well diversified. Royal Gold's upfront payments also disassociate the company from incurring any additional costs.

However, because of its royalty interests, Royal Gold also has little control over its profits in that it relies on steady production from its mining interests and counts on steady gold prices to drive margins.

How it stacks up
Under normal circumstances I'd compare a company to its peers at this point, but since Royal Gold doesn't physically mine for the gold it receives, its only competition remains spot prices and production woes at its largest suppliers. 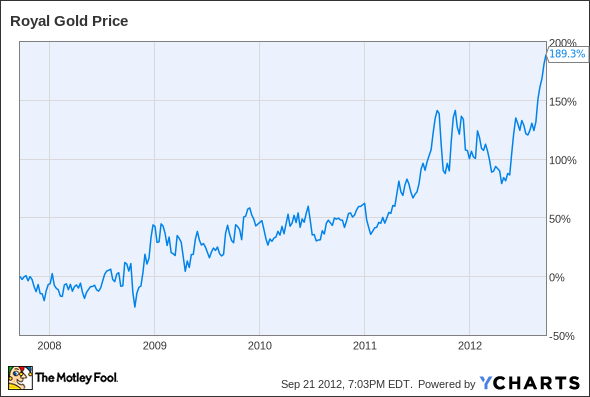 As you can see from the past five years, with the company's performance closely tied to the underlying price of gold, it's actually performed much better than many large, and even junior, miners.

The biggest concern for a Royal Gold shareholder, without question, is a production slowdown or delay. Currently, things aren't working in Royal Gold's favor in this department even if rising metal prices are. Goldcorp cut its production forecast for Penasquito mine in Mexico in July which it blamed on an inadequate water supply. Similarly, Barrick's also noted in July that its treasure trove, Pascua-Lama, was facing delays and cost hikes. Shareholders also have their fingers crossed that Thompson Creek remains on track to complete Mt. Milligan by the end of the third quarter in 2013.

What's next
Now for the $64,000 question: What's next for Royal Gold? That question depends on the spot price of gold, whether Royal Gold's largest mine interests can get production back on track, and whether it can continue to use its cash on hand to make other lucrative royalty purchases.

Our very own CAPS community gives the company a three-star rating (out of five), with 91.4% of members expecting it to outperform. I've yet to personally make a CAPScall on Royal Gold, and given the huge run-up in the share price recently, I'm going to continue to shy away from making a call.

Royal Gold's business plan is pretty flawless in that it holds zero operational cost risk, has a well-diversified portfolio, and stands to benefit from any continued money-base-increasing action by the Federal Reserve. On the flip side, cost increases in operations at many of the mines it holds interests in are reducing yields and delaying completions, which are a negative that's bound to affect results. Until I see better clarity from Royal Gold's largest royalty interests, I'm going to keep my distance.

This latest round of quantitative easing is almost assured to reinvigorate interest in mining stocks. Find out why gold could be a perfect fit for your portfolio, and why one tiny gold miner has gained the fancy of our analysts at Motley Fool Stock Advisor, by clicking here to download your copy of this latest special report.

Should This Miner Be Treated Like Royalty at a 52-Week High? @themotleyfool #stocks $RGLD $GOLD $WPM $GG $TCPTF Next Article
Current